Fashion illustration, although often considered quaint and recherché, cannot, in fact, be separated from the development of printing technologies and the growth of fashion journalism. The appearance of the first costume books (records of regional and ethnic dress) in the sixteenth century, is linked, as Alice Mackrell confirms in her book, An Illustrated History of Fashion, to: "The invention of movable printing types by Johannes Guttenberg in Munich in 1454" (p. 14). The development of engraving techniques further propagated the distribution of fashion art, even as the computer is doing today.

The advent of fashion photography, however, has had as great an impact on fashion illustration as any printing technologies. Today, illustration exists in a symbiotic, and secondary, relationship to the lens, where once it was king.

Photography-no matter how altered or retouched-has become irrevocably equated with what is real and true. The photographic image is seen to provide a "customer service"-to show the clothes, just as the fashion plate once did. In contrast, in the twentieth century, fashion illustration has become more and more expressive, conveying an idea or an attitude, the fragrance of a look, as it were.

In some ways the predominance of photography is very logical. During a time of fashion dictatorship (through the 1950s) fashion illustration existed alongside photography as a sort of couture art form that mirrored in many ways the production, presentation, and style of the clothes. The 1960s' emphasis on youth and street influences was well suited to the immediacy of photography and its bynow iconic pioneers, like the rough-and-tumble David Bailey-type parodied in Michelangelo Antonioni's Blow-Up. Illustrators, in contrast, are mostly anonymous, working as they do, alone. 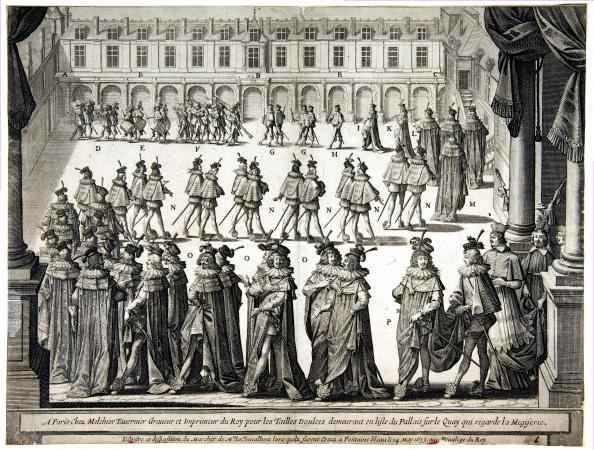 The all-star list of fashion artists might be topped by the seventeenth-century artists Jacques Callot (1592-1635) and Abraham Bosse (1602-1676), both of whom exploited improving engraving techniques to produce realistic details of the clothes and costumes of their times. A litany of fashion magazines appeared between the seventeenth and nineteenth centuries in France and England-among them Le Mecure Gallant, The Lady's Magazine, La Gallerie des Modes, Le Cabinet des Modes, and Le Journal des dames et des modes-all of which propelled the fashion plate to its nineteenth-century efflorescence.

The fashion plate, which captured trend-driven information as well as provided general dressmaking instruction, came into its own in the eighteenth century, flourishing, finally, in fin de siècle Paris. A shining example of this flowering is Horace Venet's Incroyables et Merveilleuses, a series of watercolor drawings by Venet of fashions under Napoleon I, engraved by Georges-Jacques Gatine as a series of fashion plates. France's position as the arbiter of fashion insured that there was a constant demand, at home and abroad, for fashion illustration. This demand was met by such talented artists as the Colin sisters and Mme. Florensa de Closménil. 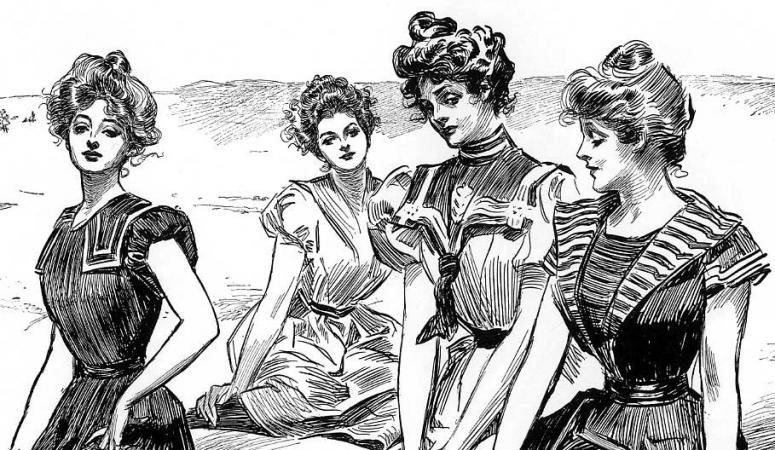 The focus of nineteenth-century illustrators was on accuracy and details. They conformed to static, iconographic conventions in order to provide information and instruction to their viewers. In contrast, contemporary fashion illustration, which dates to the turn of the twentieth century, is highly graphic and focuses more on the artist's individual filter of the world. For example, Charles Dana Gibson's (1867-1944) scratchy renderings of the modern American woman, with upswept hair and shirt-waist, defined a type as well as provided a humorous, sometimes satirical, commentary on contemporary American life.

In Paris, Paul Poiret was commissioning limited edition albums by artists like Paul Iribe (1883-1935), known for his jeweled-tone palette and clean graphic line, as pure artwork. In this way Poiret aligned his new uncorseted and exotic silhouettes with the elite and exclusive world of art.

Iribe was part of a cabal of fashion illustrators who contributed to the celebrated La gazette du bon ton, which was published from 1912-1925 and included work by such greats as: Charles Martin (1848-1934); Eduardo Garcia Benito (1892-1953); Georges Barbier (1882-1932); Georges Lepape (1887-1971); and Umberto Brunelleschi (1879-1949). The now highly collectible plates they produced for the gazette show the influence of Japanese wood-block prints as well as the new sleek geometry of Deco styling.

Mid-Twentieth Century and Beyond

Vogue and Harper's Bazaar magazines also kept the art of fashion illustration alive, featuring from about 1892 through the 1950s the work of fashion illustrators like Christian Berard (1902-1949), Eric [Carl Erickson] (1891-1958), Erté [Romain de Tirtoff] (1892-1990), Marcel Vértes (1895-1961), Rene Bouché (1906-1963), and René Gruau (1908-). Berard and Vértes in particular are famous for their friendships and collaborations with designers such as Coco (Gabrielle) Chanel and Elsa Schiaparelli, who also worked with fine artists like Jean Cocteau and Salvador Dalí (who illustrated several Vogue covers). Both Berard and Vértes had a soft line, similar to that of Andy Warhol's fashion illustrations. René Gruau, on the other hand, is famous for his work for Christian Dior. His bold calligraphic style is among the most distinguished of the first half of the twentieth century.

One illustrator dominated the century's second half: Puerto Rican-born Antonio Lopez (1943-1987). Inspired as much by the street as by experiments with art historical styles (Deco, Op, etc.) his sensual renderings of personalities from friends like Pat Cleveland and Jerry Hall to urban break-dancers, all drawn from life, had relevance and resonance even in a photographic age. "When Antonio died," says fellow illustrator Tobie Giddio, "it's as if he took illustration with him."

Indeed, in spite of the contributions of artists like Jeffrey Fulvimari, Joe Eula, Lorenzo Mattotti (1954- ), Mats Gustafson (1951- ), Thierry Perez, and Tony Viramontes (1960-1988), the métier was not to see a revival of any scale until the 1990s. However, Vanity, a short-lived illustrated magazine founded in Milan by Anna Piaggi (for which François Berthoud [1961- ] illustrated most of the covers), deserves mention.

Credit for a renewed interest in illustration at the turn of the twenty-first century goes to Barneys New York for their 1993-1996 advertising campaign. Conceived of by Ronnie Cooke Newhouse, with copy by Glenn O'Brien and squiggly, indeterminate-yet bitingly satirical illustrations-by Jean-Philippe Delhomme (1959- ), these bizarre advertisements stood in direct, and effective, contrast to the aesthetics of the time, especially the super-model phenomenon and the penchant for the grungy, often androgynous "heroin chic" look.

The next blip in the history of contemporary fashion illustration came via a lifestyle-not a fashion-book: Tyler Brulé's Wallpaper*. In Wallpaper* illustration was considered an extension of design, and the magazine's out-sized pages were given over to such talents as Anja Kroenke, Liselotte Watkins, and the magazine's illustrative mascot of sorts, Jordi Labanda. Fashion magazines, with the notable exception of Vogue Italia, which often features the work of Mats Gustafson, the Swedish-born master of minimalism, continue to relegate illustration to spots-often on cooking or horoscope pages. Vogue Nippon, founded in 2000, also proves an exception to the rule, favoring the work of such artists as Ruben Toledo and Piet Paris.

Most recently, illustration has come into vogue through collaborations between designers and illustrators/artists. Marc Jacobs at Louis Vuitton has partnered with Julie Verhoeven and Takashi Murakami, and Stella McCartney with David Remfy.

At the turn of the twenty-first century, illustration is being revolutionized by technology-again-this time via the computer. While the late nineties saw the rise of slick computer-based drawing by such pioneers as Ed Tsuwaki, Graham Rounthwaite, Jason Brooks, and Kristian Russell, there has been a backlash in favor of work that is, or looks like it is, hand-drawn. Charles Anaste's realistic, biographical illustrations are much in demand, but so are the hyperrealist work of René Habermacher, the surreal stylings of Richard Gray, and Julie Verhoeven's erotic fashion drawings. Mixed media work is also popular, as virtual collages are made possible by new technology.

Technology's greatest impact, though, is on the actual production of artwork. What fashion illustration is, must be reconsidered. It is a strange, strange irony, too, that the fashion plate, an early form of fashion illustration, was mechanically produced and hand-colored, whereas contemporary illustration usually starts with a hand sketch and is finished-and colored-by hand. "I am curious about what is going to happen," muses Habermacher, whose work fully exploits digital processes. "In recent years," he said, "I have realized that the direction of my work is different from what you can describe as classical fashion illustration. Continuing on that road will necessarily lead to a new definition."

The Art of Fashion

However difficult a definition of fashion illustration might be, its existence, and importance, is without question. The world has need of what art director Davis Schneider refers to as "visual luxuries"-illustrated fashion art.