Fetishism is a term with a long and complicated history, encompassing religious, anthropological, economic, and sexual meanings. Missionary tracts with titles such as Fetishism and Fetish Worshippers denounced the "barbarous" religions of "primitive" people who worshiped "idols of wood or clay." The term fetish was then extended to refer not only to objects allegedly possessing magic powers, but also to anything that was irrationally worshiped. Karl Marx famously coined the term "commodity fetishism" to describe the way objects produced through human labor acquired an exaggerated exchange value. Sexologists and psychiatrists traditionally described fetishism as a sexual "perversion." Today, fetishism is usually characterized as a type of variant sexuality, in which arousal is associated with a (nongenital) part of the body, such as hair, or an inanimate object, such as a shoe.

Experts tend to agree that the majority of sexual fetishists are men. Indeed, the psychiatrist Robert Stoller argued, "fetishizing is the norm for males, not for females." However, the subject of female fetishism is of interest to cultural theorists. There are also thought to be degrees of fetishism. Many men may be sexually aroused by high-heeled shoes, for example, but only a minority require the presence of such shoes for sexual arousal-and even fewer women have such a directly sexual relationship with shoes. Fetishism has also been associated with sadomasochism and transvestism. Leather fetishists, for example, may be involved in sadomasochistic sexuality. Sigmund Freud argued that fetishism was caused by castration anxiety, but this theory is not widely accepted today.

High-heeled shoes, so-called "kinky" boots, corsets, lingerie, and garments made of leather or rubber are among the most common clothing fetishes. Sometimes individual clothing fetishes are combined; thus, a black leather corset might be worn with high-heeled boots and long rubber gloves. Fetishes are associated with particular sexual fantasies. Or as Stoller put it: "A fetish is a story masquerading as an object." In the nineteenth and early twentieth centuries, fetish clothing was utilized in secret sexual scenarios; for example, in brothels or the staging of pornographic imagery.

Since the 1970s, however, clothing fetishes have played an increasingly important role in fashion and popular culture. As early as the 1960s, the television program The Avengers featured a character, Mrs. Peel, who wore a black leather catsuit that was modeled on an authentic fetish costume. Mrs. Peel's costume was a precursor of Michelle Pfeiffer's latex catsuit and mask in the film Batman Returns.

Fetishism moved from the sexual underground into mainstream popular culture via subcultural groups such as punks and leathermen. A youth subculture associated with bands like the Sex Pistols, the punks appropriated fetish clothing as part of their own "style in revolt." The fashion designer Vivienne Westwood, herself a punk, opened a shop in London called Sex, where she sold bondage trousers, rubber stockings, corsets, and extreme shoes to a clientele divided between real fetishists and young people attracted by the idea of breaking taboos. Westwood herself wore "total S&M as fashion" in the early 1970s, not just in private or at clubs, but on the street, as a way of subverting accepted social values. 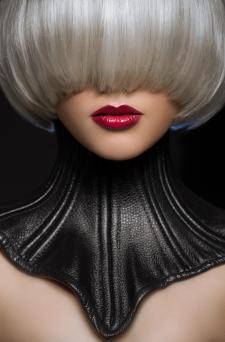 Jean Paul Gaultier is another designer who pioneered fetish fashion in the 1980s. Gaultier has told interviewers that, as a child, his grandmother's flesh-colored corsets fascinated him, and he describes the process of lacing a corset as ritualistic. Many of his designs for both men and women have featured corset-style lacing. He is probably most famous for the corset that he designed for Madonna's Blonde Ambition tour, which helped launch the trend for underwear-as-outerwear. Lingerie, of course, has become a ubiquitous influence on fashion Perhaps even more than Gaultier, Thierry Mugler has focused on corsetry and on fetishized materials such as rubber and leather to create costumes that evoke the image of "the phallic woman." One of his couture ensembles was entirely handcrafted of leather, including a leather neck-corset. It resembled the carapace of an insect. Other hard-bodied styles include metal corsets and entire ensembles made of metal and plastic, which transform the wearer into a kind of armored cyborg. Indeed, there is virtually no fetish ensemble-from the clothing of the equestrienne to the military uniform-that has not appeared on Mugler's runways.

Leather is the material most often utilized in fetish fashion. Claude Montana was among the first to become known for fetish leather, to be followed in the 1990s by the Italian designer Gianni Versace, who caused a sensation with his leather fashions. Is it "chic or cruel?" asked The New York Times. Similar styles had been pioneered by sadomasochists, especially gay leathermen. Designers such as Thierry Mugler and John Galliano for Dior have also incorporated other second-skin materials, such as latex, into high fashion. All of the designers mentioned are also known for their "kinky" shoes and boots, which are the most important accessories in the wardrobe of fetish fashion. Fetish shoes typically feature extremely high heels and sometimes also high platforms and ankle straps or lacing that allude to bondage. Fetish boots tend to be either very high (to mid-thigh) or overtly aggressive-looking.