François Lesage, a French embroiderer born in Chaville in 1929, is the son of Albert Lesage (1888-1949), founder of Albert Lesage and Company in 1924, and of Marie-Louise Favot, known as Yo, a designer for Madeleine Vionnet. After an apprenticeship in the family firm in Paris, François Lesage went to the United States in 1948 and opened a shop on Sunset Boulevard, Los Angeles, where he embroidered for dressmakers and Hollywood studios, but the death of his father the following year put an end to his American adventure. François Lesage returned to Paris to assist his mother in managing the renowned company.

At the time of his father's death, the embroidery house that Lesage inherited was among the most important and prestigious specialty companies of its type in the world. In 1924 his father, Albert, had taken over the business of the embroiderer Michonet. Michonet's venerable firm, which was founded in 1858, had supplied the great names of couture of the belle epoque (Charles Frederick Worth, John Redfern, Jacques Doucet, Callot Soeurs) with beautiful embroidery to decorate their creations. The firm had also supplied the imperial court of Napoleon III with embroidery and had succeeded in establishing new connections with the talented generation of couturiers between World War I and World War II. François Lesage was thus familiar from a very young age with the technical and aesthetic feats accomplished by his parents for the original collections of Madeleine Vionnet and Elsa Schiaparelli, among others.

When he took charge of the firm, which possessed tens of thousands of samples, the young François continued the craft tradition and created his own collections of samples, which were immediately admired by such designers as Pierre Balmain, Cristóbal Balenciaga, Robert Piguet, Jacques Griffe, and Jean Dessès. For the jolie Madame (the trade name of Pierre Balmain), full of grace and delicacy expressed in muted tones, he updated the rococo ribbon. The artificial flowers, straw spangles, and planished sequins to be found in the work of several couturiers of the time are early examples of the style of the young Lesage, a subtle mixture of tradition, novelty, and a bold approach to every challenge.

François Lesage freed himself from the weight of tradition in the 1960s. He successfully experimented with new materials, including patterns of plasticine and cellophane, bold treatments of classic materials, and uncommon arrangements that revealed a different approach to relief. Embroidery had become fabric, and fashionable dresses, cut straight and not fitted to the body, offered an ideal setting for Lesage's graphic compositions, which covered the entire surface of the design. Lesage acquired new clients, including such stellar names as Lanvin, Givenchy, Dior, Grès, Patou, and Yves Saint Laurent. 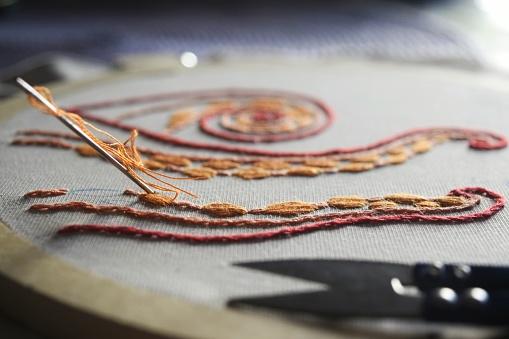 In the 1970s Lesage designs returned to the thematic collections that had been favored by Schiaparelli. Yves Saint Laurent was the first designer to recognize the aesthetic potential of this change. The entire industry, stimulated by lavish orders from Arab princesses, followed Saint Laurent's lead and kept the embroidery workshops operating overtime. Lesage developed embroidery on jersey and new techniques, such as precut designs attached by thermoplastic films to fabrics. In 1977 he embroidered the court dress of the wife of Jean Bedel Bokassa, which was ordered from Lanvin on the occasion of the coronation of Bokassa to the office of emperor of the Central African Empire.

In 1982 Lesage began to collaborate with the American designers Calvin Klein, Bill Blass, Geoffrey Beene, and Oscar de la Renta. Throughout the decade thematic collections provided opportunities for creation and innovation. Lesage established fruitful dialogues with Yves Saint Laurent; as well as with Karl Lagerfeld, the new artistic director of Chanel and Christian Lacroix, with whom he collaborated from the opening of his couture house in 1987. While Lacroix was still at the house of Patou, he met Lesage, whom he considered his "godfather in fashion." For all these designers, who competed with one another in erudition and historical references, Lesage revisited the entire history of art, producing masterpieces for each of them that required hundreds of hours of work. Among the most famous of his productions transposed Van Gogh's irises and sunflowers onto Yves Saint Laurent jackets in 1988, a feat requiring no fewer than six hundred hours per jacket.

Encouraged by this infatuation with the magic of embroidery, Lesage launched a line of embroidered accessories in 1987, created by Gérard Trémolet and sold in the Lesage boutique opened that year on the Place Vendome on the former site of Schiaparelli's business. After the shop closed in 1992, the accessories were sold in department stores around the world.

In 1990 Lesage joined the Comité Colbert; in 1992, in order to perpetuate his art and transmit his skill, he opened the Lesage School of Embroidery at the address of his workshop, 13 rue de la Grange Batelière in Paris.

Having attained the summit of his art, Lesage became the subject of several one-man shows: at the Fashion Institute of Technology in New York (1987), at the Musée de la mode et du costume Palais Galleria in Paris (1989), at the Fashion Foundation Hanae Mori of Tokyo (1989), and at the Los Angeles County Museum of Art (1991).

With the 1990s came an influx of new orders from creators such as Thierry Mugler and Jean Paul Gaultier, who launched their own haute couture activities. But also, paradoxically, orders for ready-to-wear clothes from houses and designers such as Chanel, Dior, and Yves Saint Laurent added to the work of the embroiderers working under Lesage.

In addition to the work done for designers, Lesage has carried out many special orders. For example, on the occasion of the World Youth Days in Paris (1997), he embroidered the chasuble and miter of Pope John Paul II. Additionally, he embroidered the costumes of Erik Orsenna and Roman Polanski for their entry into the Académie française (1999) and costumes for the new revue at the Moulin Rouge (1999). Lesage followed the long tradition of the house in working for royalty when he collaborated with Moroccan craftsmen and designed costumes for the trousseau of the bride of Mohammed VI in 2001. In 2002 the Lesage company was acquired by Chanel as part of its Paraffection group, bringing together craftsmen of elegance who possess exceptional skill. 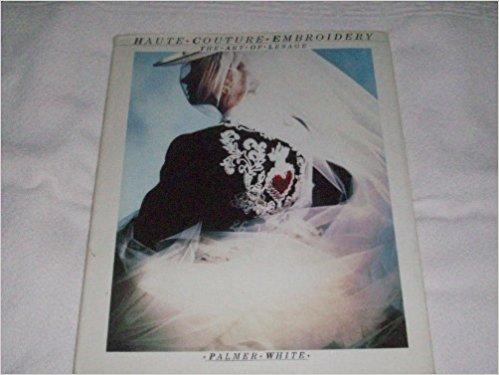