Guy Bourdin (1928-1991) has an extraordinary cult following within the field of fashion photography, expanded by the 2003 retrospective of his work at London's Victoria and Albert Museum. Critical, autocratic, dictatorial, and quirky, he had a personal life that was chaotic and probably sadistic, pushed his models to the point of tears and passing out, and even under-mined his reputation during his lifetime and his legacy upon his death. Yet despite-or possibly because of-the morbidity and violence of his personal and professional life, Bourdin has had a profound influence on photo-graphic and artistic currents of the late twentieth century.

Guy Bourdin was born in Paris. His mother abandoned him when he was still an infant, and he was alternately raised by his grandparents in Normandy and Paris and placed in a boarding school. Bourdin was the only child to the age of fifteen, when his brother, Michael, was born, and he spent much time in the solitary pursuits of reading and drawing.

At age twenty Bourdin joined the French air force for his mandatory two years of military service, working as an aerial photographer in Dakar, Senegal. After he completed his service, he wanted to buy a small wedding photography business in Magny-en-Vexin, near the family home in Normandy. Refused a loan by his father, Bourdin worked at Bon Marché, the Paris department store, selling lenses and at a variety of odd jobs, including cleaning floors, acting as a messenger at the U.S. Embassy, and washing dishes at the Brasserie Lipp. During this period, he continued to draw, photograph, and produce paintings inspired by Balthus, Francis Bacon, and Stanley Spencer.

In the late 1940s Edward Weston's photograph of a pepper showed Bourdin that photography could be art. He was also inspired by the monumental landscapes of Ansel Adams and developed a friendship with the dada painter and photographer Man Ray, who wrote the gallery announcement for Bourdin's 1952 exhibition at Galerie 29 on the rue de Seine in Paris. It was undoubtedly through Man Ray that Bourdin became acquainted with surrealism, which was to infuse his photography throughout his life. 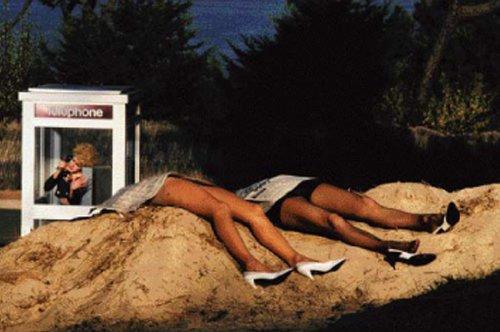 In 1954 Bourdin took his work to French Vogue, where he was given a fashion assignment on hats. It included a shot, which has become one of Bourdin's early classics, showing a model walking by a butcher shop, three skinned and bloodied calves' heads swinging just above her impeccably turned head. Bourdin continued his exclusive editorial work for French Vogue from 1955 through 1987. Bourdin's advertising work for Charles Jourdan shoes from 1967 to 1981 was extremely important. He also did advertising work for the designer Grès and in 1976 photographed the controversial Bloomingdale's "Sighs and Whispers" lingerie brochure, which has become a collector's item.

The Charles Jourdan shoe campaign was ground-breaking in its approach, originality, and daring. In Bourdin's hands, the shoe was presented as a fetishistic object, both as an object of desire and the focal point of scenarios of violence. Bourdin's infamous 1975 photograph depicting the scene of a bloody automobile fatality, the body marked in chalk on the pavement next to the featured shoes, was a benchmark in the history of attraction by shock. The power and perversity of this image were legendary: that an image of death and tragedy (though fictitious) would be used to sell shoes was unthinkable, yet unforgettable. The image itself possessed the same power of attraction that causes a crowd to gather at the scene of a gory accident. In other shots Bourdin juxtaposed gigantic shoes and tiny shoes, which had been made especially for this purpose by the Jourdan company. In this way, Bourdin played on the type of size discrepancies often used in surrealist works, such as the paintings of René Magritte.

Bourdin clearly transformed his personal obsessions into a body of work that was stunningly daring and visually unforgettable. "What Guy did," his stylist Serge Lutens has said, "was conduct his own psychoanalysis in Vogue " (Hayden-Guest, p. 143). Abandoned as an infant by an unloving woman, he obsessively depicted women tied up, in compromising situations, or dead. He was said to favor models with pale red hair, because they reminded him of his mother, and he was renowned for making bizarre, macabre, and sometimes cruel demands on them. Stories abound about models being made to balance on a rock during an electrical storm, being subjected to props that cut into their flesh, and passing out after being suspended to appear as if they were flying.

One model, Louise Despointes, was said to have been kept waiting in a freezing studio, then wrapped in plastic and lowered into a bathtub of extremely cold water on which black enamel paint had been floated. She emerged from the tub "enameled" in black paint, uncomfortable and unable to work for days. Bourdin even reputedly placed models in life-threatening positions and delighted in the idea of their deaths. In another famous story, Bourdin initially smeared the faces of Despointes and another model with a thin layer of glue as a way to stick dozens of pearls to their faces. When he decided to cover their entire bodies with pearls, they passed out because they were not getting enough oxygen to their skin and could not breathe, and the editor stopped the shoot, thinking the models would die. Bourdin was reputed to have said, "Oh, it would be beautiful-to have them dead in bed!" (Hayden-Guest, p. 136).

Eroticism and Violence in Bourdin's Photography

Eroticism-and the link between sex and violence-is a major component of Bourdin's photography. The foundation had been laid by the imagery of the preceding decade, particularly the sexual emancipation of Richard Avedon's work of the 1960s. Yet the brilliant and sensitive use of nudity and sexual innuendo that Avedon and Bob Richardson had introduced into fashion depiction in those years-confronting lesbianism and the ménage à trois, for instance-was tame by 1970s' standards. The time was ripe for Bourdin's stylized violence and the darker realities of voyeurism, death, and rape.

Bourdin's photographic violence is thematically akin to the bloody climax of the film Bonnie and Clyde, the dental torture in Marathon Man, or the orgiastic violence of The Wild Bunch. This brand of violent depiction plays with the audience's attraction to the escalating brutality and demands that the viewer consider violence glamorous. The new brand of violent fashion photography and film supplies the viewer with a fantasy fulfillment unavailable in everyday life. As Stephen Farber explains in his New Yorker article "The Bloody Movies: Why Film Violence Sells":

"One of the functions of popular art has always been to give people some notion of experiences denied them in reality-a taste of romance, glamour, adventure, danger. But perhaps as everyday life becomes more smoothly homogenized, people need splashier, more grotesque vicarious thrills. Today, … [we only experience violence] at professional hockey and football games, at high-powered rock concerts, or at the movies. (p. 44) "

Guy Bourdin's violence against women-both actual and photographic-played on their vulnerability, which is a leitmotif in his work. Shadows are an effective device often used for creating an air of mystery, implied physical threat, and even frenzy. Bourdin used such shadows as early as 1966 to suggest the presence of Batman-normally a hero figure and protector-chasing a confused, worried woman through the streets. The thrown shadows, used repeatedly in Bourdin's oeuvre, represent the woman's living nightmare of vulnerability, of being threatened by indistinguishable forms and unseen presences.

Influence of Bourdin's Personal Life on His Work 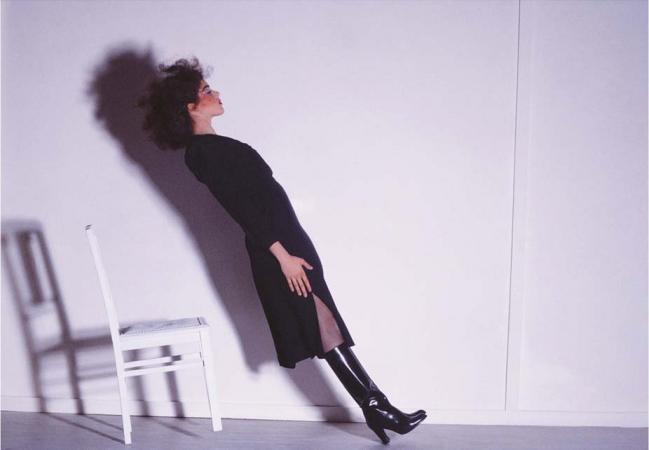 Guy Bourdin: A Message for You

Bourdin even materialized the reality of violence toward women into his personal life: his first wife is thought to have committed suicide, his second hanged herself, one girlfriend lived after slashing her wrists, and another died after falling out of a tree. As Tim Blanks suggested in his New York Times Magazine article, "Both masochism and sadism were bedfellows." Bourdin also seemed bent on undermining himself and his own reputation. He was infamous for not allowing his work to be used in books and exhibitions and for refusing to grant interviews. In 1985 he rejected the $9,000 Grand prix national de la photographie, given by the French Ministry of Culture.

In his article "The Return of Guy Bourdin," Anthony Hayden-Guest explained how Bourdin, when he died of cancer at age sixty-two, left his estate in disarray, compounding a horrendous tax situation and further paralyzing his legacy (p. 137). He had deeded his pictures to Martine Victoire, his common-law wife of seven years, in a signed and witnessed (but not notarized) contract; Samuel Bourdin, the photographer's estranged only child, contested the action. The legal decision gave Victoire possession of the archives but allowed Samuel to exercise his discretion in their use. Without his consent, Victoire could not publish, sell, or exhibit the photographs she owned. Subsequently, the reproduction rights were contested in court.

The vast influence Bourdin had on subsequent art and photography is only now becoming clear. Like it or not, Bourdin broke taboos and reflected the escalating violence in society, blazing the path for contemporary artists like Paul McCarthy and Matthew Barney in combining the disgusting with the exalted. He pioneered the narrative approach to photography that has become one of its dominant strains, from the work of Gregory Crewdson to that of David Leventhal. Bourdin created pictures filled with what seemed to be clues in a mystery, hinting at meanings rather than articulating them. We are often unsure of what is going on; we know only that we are dealing with a specific moment in which something has happened or is about to happen. Bourdin scatters clues in his pictures, such as water spurting from a pool with a shoe by its edge, a girl "talking" to a shark, or two girls dressed only in lingerie watching as items fall from a purse, frozen in midair.

Bourdin was also one of only a handful of photographers who had almost complete creative freedom within the field of editorial and advertising fashion photography. In both realms Bourdin was a technical virtuoso. His brilliance in producing a wide range of ideas with a continually fresh vision was equaled by his mastery of technique and execution. His background as a painter influenced his approach, particularly the way he built his compositions. Each shape and color was painstakingly and thoughtfully composed to contribute to the whole.

Bourdin's concern for the final effect of his work, including the exact placement on the printed page, is evidence of his commitment to fashion photography. With respect to the photograph itself as a compositional element, he created some of the most unusual and visually exciting layouts ever published in fashion periodicals. Particularly effective was his frequent grouping of photographs in multiples or sequences, repeating sections of the picture or making unexpected juxtapositions to heighten interest.