Beautiful nails are considered to be a precious gift to be treasured and cared for. In Greek mythology Eros is identified as the first manicurist. He cut the goddess Aphrodite's fingernails while she was sleeping and scattered them on the beaches of the earth. Seeing what had transpired, the fates collected the clippings and turned them into the semiprecious stone onyx-that is Greek for fingernail. In fact, human nails-the convex, hard horny plates covering the dorsal aspect of the fingertips and toes-have evolved from the primeval claw. In folkloric beliefs, the nails are often said to continue growing after death, temporarily evading mortal decay. Thus, long nails are characteristic of vampires, revenants, and others of "undead" status. The phenomenon is in fact due to the dehydration of the corpse which causes the skin around the nails to retract and shrink back, but the alarming effect of this particular aspect of decomposition has inspired countless morbid horror stories where sorry individuals who have been buried alive attempt to scratch their way out of the tomb. Nails, along with bones, hair, and teeth of the dead were, as Sir Thomas Browne noted in the seventeenth century, "the treasures of Old Sorcerers" and one of the oldest forms of poisoning was grated nail, which was slipped into an unsuspecting victim's food or wine. Even today people take care to disinfect a human scratch, perhaps because nails actually do contain a small percentage of arsenic.

The Origins of Manicuring

The practice of manicuring is itself extremely ancient. There is evidence that as far back as 4,000 years ago, manicures took place in southern Babylonia, and manicure instruments have been found in Egypt's royal tombs. The Romans painted their nails with a mixture of sheep fat and blood. Turkish women created a pink tint for the nails from boiled rose petals. Women in biblical times not only dyed their hair but also painted their fingernails and toenails as well as hands and feet with henna juice (as mentioned in the Song of Solomon), a practice that still forms part of Middle Eastern culture today. The custom of growing long nails relates to status, since it can preclude certain forms of manual labor. Chinese noblemen and women of the Ming Dynasty (1368-1644) were well known for their extraordinarily long fingernails, which were sometimes protected with gold and jewel-encrusted nail guards. Servants were required to feed, dress, and perform other personal chores for them so that they did not break a nail. The Chinese also used nail polish made from egg whites, beeswax, vegetable dyes, and Arabic gum.

In the Western Hemisphere colored nail polish was uncommon until the twentieth century. Instead, unstained hands with white and regularly formed nails were esteemed as part of a dominant aesthetic linking physical hygiene and moral purity. Etiquette guides from the 1800s recommend a little lemon juice or vinegar and water to whiten the nail tips and commercial products available at this time included nail polishers or buffers, crystal stones, emery boards, hand and cuticle creams, pearly white liquid, and several kinds of bleaching powders for the hands and nails. This apparent lack of adornment was an obvious indicator of wealth and enforced leisure. Emma Bovary's nails for instance are "scrubbed cleaner than Dieppe ivory and cut almond shape." Such fastidious treatment of the nails was in keeping with the anti-cosmetics stance, which professed a belief in the transparency of inner beauty and continued well into the early 1900s.

The Innovation of Nail Polish

Hollywood film did more than any other visual medium to popularize the wearing of nail polish in the West. Film actresses of the 1920s looked exotic, symbolized modernity, and flaunted nails that were painted with colorful glossy enamel that soon became commercially available. In a literal sense, the new lacquer was derived from the movies since cinematic film and nail polish originate from the same primary ingredient-nitrocellulose. One early method of making nail polish was to mix cleaned scraps of film with alcohol and castor oil and leave the mixture to soak overnight. The first tinted nail lacquers were produced in subtle shades of pink and had names like "rose," "ruby," "coral," and "natural" in an attempt both to downplay the chemical origins of the product and to overcome the monochrome format of contemporary advertising.

Deep color polishes like cardinal red were unavailable until the 1930s, when Charles Revson and his partners developed a method to add opaque pigments (rather than dyes) to polish so that it would coat the nails evenly.

Their company, Revlon Inc., still one of the leading producers of nail polish, became particularly famous for its legendary 1950s "Fire and Ice" advertising campaign. These ads for a range of matching nail enamels and lipsticks were groundbreaking in their use of dramatic visuals and clever text and are considered to be among the first to overtly link cosmetics with sexuality. A typical headline ran "For you who love to flirt with fire … Who dare to skate on thin ice." Like much cosmetic advertising of the period, Revlon's marketing exploited a range of connotations of nail decoration. Painted nails were part of the self-scrutinizing feminine masquerade that was dependent on male approbation, but they were also associated with increasingly liberal ideas about a pleasure-seeking modern woman. 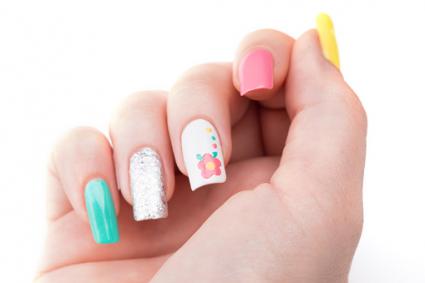 The last few decades have seen further innovations and fashions in Western nail art. Manufacturers have created quick-drying polishes targeted at women with active lifestyles, and the range of colors available has multiplied. From the 1980s onward brightly colored polish has been available in unusual colors ranging from ice-cream pastels to gunmetal gray, along with polishes that contain built-in decorations such as glitter or tiny metallic stars. In 1995 Chanel brought these colors firmly into the mainstream when it launched a deep black-red polish. "Vamp" continued the Hollywood connection when the actress Uma Thurman in the film Pulp Fiction wore it that same year. Priced at $15 a bottle, Chanel's polish helped to create a market for high-priced nail products and paved the way for the success of companies like Urban Decay and Hard Candy-which made huge profits from manufacturing odd experimental colors for nails. In 1998 the American Jenai Lane created "mood nail polish" which is designed to change color according to body temperature-in reflection of one's mood.

Over $6 billion is spent on services in American nail salons every year and the art of the manicurist has become increasingly prized worldwide. Men as well as women are now regular clients since well-kept hands are considered to be an important part of a professional image. New technologies have also resulted in more realistic-looking acrylic nails and nail extensions, which are attached with glue adhesives and glue tabs. At the fantasy end of the market, fingernails and toenails have become a natural canvas for the expression of creative imagination. Nail art is often stunningly elaborate-nails can be sculpted, stenciled, pierced, and of course painted with intricate designs. Competitions such as the Nail Olympics held annually in Las Vegas honor the art of the manicurist-as a latter-day miniaturist painter-and indicate the growing professionalization of the industry. In Britain and the United States, contemporary nail art resonates particularly with black culture. In this context elaborately painted nails are seen to offer a highly decorative alternative to Eurocentric ideals of beauty.