The primary function of rainwear-outerwear including raincoats, trench coats, mackintosh coats, rain slickers, rain parkas, and even oilskin coats- is to protect the wearer from the cold, rain, and sleet while preventing penetration of moisture to whatever is being worn underneath.

Unlike most coats and jackets-which are usually appropriate for a particular occasion-rainwear manufacturers have to respond to the functional needs of the wearer: the classic case of form following function. But although fashion is often a secondary consideration when it comes to rainwear, most rainwear items nevertheless are also expressions of style.

The original mackintosh raincoats dating from the early 1820s were of a fairly crude construction and awkward appearance. The "India-rubber cloth" designed by the Scottish chemist Charles Mackintosh, consisting of two layers of cotton cemented with a layer of rubber, was not originally intended for outerwear at all, but instead was developed to waterproof tarpaulin.

The mackintosh concept was seized upon by tailors, even though problems arose as needle holes greatly decreased the material's ability to protect against the rain. Mackintosh eventually developed a process to seal the seams, and his name became synonymous with rainwear. Even as late as 1900 almost any raincoat was referred to as a mackintosh.

In the first decade of the twentieth century, many raincoats were still being made of rubber, and were cut long enough to reach a man's ankles and made in either single- or double-breasted styles.

The biggest development in the rainwear category came with the need to provide an all-weather coat to the officers serving in the trenches during Word War I. The London firm of Burberry owned the patent to a fabric of fine cotton gabardine that had been chemically processed to repel rain in order to protect shepherds and farm workers in wind-swept rural England. Although the Burberry cloth coat had been used by some officers during the Boer War (1899-1902), it was not until 1914 that the brand would receive the approval of the British war ministry.

More than 500,000 Burberry coats were produced for the war effort, and these "trench coats," as they would become known, very quickly became the official coat of Allied fighting men. Characterized by its shoulder tabs, a collar with storm flap, and D-shaped rings on the belt (to which pieces of a military kit, such as a water bottle or hand grenade, could be attached) the trench coat was produced by Burberry as well as by the London firm Aquascutum-each featuring its company's distinctive house-check lining.

Hundreds of thousands of trench coats have been sold in the early twenty-first century, but they are more likely to be worn by someone ready to do battle on New York's Wall Street or in London's Square Mile than on the muddy fields of the Somme or Ypres. Versions of the trench coat have graced the catwalks of Yves Saint Laurent, Giorgio Armani, Chloe, and Moschino. In 2004, the original trench coat was still an Aquascutum and Burberry staple item, one that seems to epitomize British style for many American and Japanese consumers. It thus has been highly successful as a piece of military attire as well as a stylish, practical, and iconic piece of clothing.

By 1928, the rainwear of choice had become the French aviation coat. Similar to the trench coat, a French aviation coat was most frequently double-breasted with raglan sleeves, and was often cut in gabardine lined with oiled silk and lined with a plaid wool to ensure the coat was both warm and dry. Like the trench coat, the aviation coats also had belted waists as well as straps of gabardine at the ends of the sleeves and would become known as an all-weather coat.

During the 1930s, there was a trend toward a wider skirted, looser hanging style of coat. This was in fact excellent for keeping rain from the body, taking into account that the gabardine from which it was constructed was only water-repellent rather than waterproof. In 1934 Men's Wear explained: "A coat is like a tent. An ordinary tent of canvas will not leak in a driving shower, as long as you do not scrape the underside. Touch the underside and the water will begin to seep through instead of shedding off. The same principle applies to a loose fitting coat" (p. 27). Oiled silk and cotton raincoats and rubber ponchos also began to make an appearance at the time. 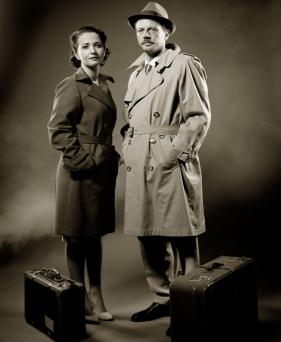 Not a great deal else changed in rainwear fashions, leaving aside color trends (it was fashionable to wear white raincoats in the 1930s, for example, and instead of blocks of color, different shades and tones were employed) and occasional changes in the typical length of a raincoat, until the 1953 introduction of a raincoat made from 50 percent cotton and 50 percent polyester. The London Fog, as this coat would become known, was the first on the market that was both water-repellent and washable. It was originally brought out as a single-breasted raglan and as a double-breasted trench coat, with a third style (a single-breasted belted trench coat with zippered sleeve pocket) added later.

The Peacock Revolution, born in Carnaby Street in the 1960s, would see many women's-wear designers cross over to the menswear realm, and inevitably their influence was noticed in rainwear. The Sherlock Holmes-esque raincoat with cape made a reappearance, as did houndstooth raglan coats. With the vogue for highly shaped suits, raincoats with wide Napoleon collars and flared lines soon appeared. At this time, and during the 1970s, the raincoat graduated from being a solely functional item to fashion "must have," something that has continued well into the twenty-first century with Burberry and Aquascutum raincoats and trench coats being fashion essentials almost 100 years after they were first conceived.