The twenty-first century body, like those of preceding centuries, is still engaged in the eternal quest for an ideal shape. The modernist body of fashion has made it possible for both women and men to reconstruct themselves by a variety of means, resisting the body's unruly nature in order to achieve a firm, toned physique that conforms to sexual stereotypes and concepts of beauty. While women in earlier centuries relied mainly on dieting and corsetry to achieve the perfect shape, today's alternatives include muscular development through weight-lifting, strenuous exercise, and perpetual dieting. Cosmetic surgery has become an accepted method of transforming the body's natural shape. Many contemporary men rely on strenuous weight training, other forms of exercise, dieting, and cosmetic surgery to achieve bodies that conform to social ideals of masculine appearance.

During the latter half of the twentieth century, women in the developed world came to rely on medical science for regular health screening and routine medical procedures. The medicalization of the female body continued, and by the beginning of the 1990s plastic surgery was widespread and surgery became a "normal" means of fashioning the body. Whereas body-shaping fashions had merely manipulated the body into an ideal shape temporarily, the surgeon's scalpel could achieve enduring transformations intended to boost both the patient's self-esteem and her social desirability. Whereas during the early years of cosmetic surgery many women would be at pains to conceal the fact that they had undergone a face-lift or other procedure, toward the end of the twentieth century such surgery was socially acceptable and even regarded as glamorous.

That such radical procedures have nevertheless become commonplace is explained by a combination of the ever-increasing technical ability to perform them and the continually evolving notion of the ideal female body. Prior to the 1960s, changes in the ideal female form were more likely to have been achieved by clothing than by physical transformations of various sorts. The emergence of the "New Woman" in the late nineteenth century introduced an element of athleticism into the feminine ideal, even as corsets continued to be worn on the sports field. The ideal of the 1920s was youthful and trim, but women of the 1930s through the 1950s were shaped by elastic undergarments.

By the 1960s, perceptions of femininity were aligned to ideals of youth, and a fixation with the adolescent figure resulted in a very thin, androgynous physique often achieved by extremes of dieting. Dieting prevailed throughout the 1970s as the principal means of body modification, augmented by exercise regimes of jogging, tennis, and roller-skating, which gave way to aerobics, dancercise, and fitness classes in the 1980s. The lithe but shapely physiques of Jane Fonda and Cindy Crawford represented the sought-after ideal, which fashion augmented with shoulder pads and bulky "box" jackets that produced the appearance of a voluptuous, powerful physique. In the 1990s, the use of exercise and diet to achieve an ideal shape was increasingly supplemented by medical and surgical procedures. One group of women, however, took exercise itself to extreme levels.

The phenomenon of female bodybuilding, which had existed since the mid-twentieth century but only emerged from its subcultural milieu in the 1980s, introduced a rippling range of hyper-muscular bodies to the wider context of visual culture. Women with bulging thighs, enormous calves, rock-hard biceps, Herculean shoulders, and washboard abs introduced a new form of physicality that previously had only been associated with male bodybuilders or with the female superheroes of comic strips. Female mesomorphs, as women bodybuilders became known, inspired some women to strive for bodies with exceptional strength and definition.

Although fashion magazines typically promote weight loss and body conditioning to reinforce the image of women as being lean and toned, mesomorph bodies blur gender boundaries. This female body type reads as an emulation of masculinity, male power, and privilege. The feminist scholars Susan Bordo and Christine Battersby cite the female mesomorph as an example of the cultural difficulties over issues surrounding the body, gender, sexuality, and power. Robert Mapplethorpe photographed the bodybuilder Lisa Lyons as the AIDS epidemic grew, confronting the anxieties of a society riddled with fears of sickness and death with a representation of power and vitality. 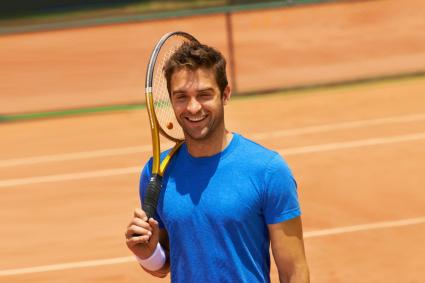 But body modification is practiced by men as well as by women. In the Western tradition, elite male clothing has typically been body concealing, emphasizing attributes of wealth and status rather than physical form. Only in a few instances, such as the uniforms of cavalry officers, did men wear body-enhancing clothing; tellingly, the shoulder pads and corsets worn to shape their figures mirrored the dress of the early nineteenth-century dandy. By the end of the nineteenth century, however, an athletic physique, implying proficiency at such upper-class pursuits as tennis and college team sports, had begun to be considered a desirable attribute of young men. Sheer muscularity, however, remained the province of circus strongmen and manual laborers. Weightlifting, though a part of the modern Olympics since its inception, was in its infancy as a sport.

Following World War I, the gradual acceptance of men going bare-chested or nearly so while swimming in mixed company, helped to focus attention on the muscular torso as an attribute of masculinity. Bodybuilding as a defined set of techniques soon followed. For example, Charles Atlas, who billed himself as "the world's most perfectly developed man," began in 1929 to market his system for turning "97-pound weaklings" into muscular giants. The first "Mr. America" contest was held a decade later, won by the bodybuilding legend Bert Goodrich.

The invention of weight-training machines, such as the Nautilus in the late 1960s and early 1970s, transformed the nature of physical exercise and made strength training readily available to men of all ages and ability levels. By the mid-1970s, men and women alike were putting in more and more time at the gym in pursuit of the ideal body. Meanwhile, bodybuilding as a sport was popularized by specialized magazines, by famous gathering spots like southern California's "Muscle Beach," and by a network of professional and amateur contests.

Bodybuilding is a special subculture, in which extremely massive musculature, the hypertrophic development of all of the body's muscles (often relying in part on steroids and other metabolic enhancements), and the taking of sculptural poses tend to go far beyond mainstream society's criteria for the masculine ideal. In some gay subcultures, bodybuilding to a lesser extreme is the norm, and having a "cut" body (one with sharply defined musculature) is highly sought after. Within those communities, implants, liposuction, and other surgical enhancements have become commonplace. Most broadly, a toned, muscular body has become a widely accepted ideal for young men in Western cultures, to the extent that not to possess such a body is as much cause for self-conscious concern as it has become for a woman not to be toned, shapely, and firm.

As these body ideals are considered, new functions and new perspectives of the fashioned body unfold. The body's role as a site of resistance, empowerment, and emancipation reveals that the body ideals of fashion are not necessarily satisfied by the pursuit of beauty alone.

Bordo, Susan. "The Body and the Reproduction of Femininity: A Feminist Approach to Foucault." In Gender/Body/Knowledge. Edited by A. Jaggar and S. Bordo. New Brunswick, N.J.: Rutgers University Press, 1989.

Comments
© 2006-2021 LoveToKnow, Corp., except where otherwise noted. All Rights Reserved.
Bodybuilding and Sculpting