Branding is a body modification that permanently transforms the surface of the skin by causing a visible scar. The process of branding involves extreme heat or cold applied by a variety of methods. The branding burns and destroys the surface tissue of the skin and stunts or permanently changes the color of hairs growing from the resulting scars.

Historically, branding has been used on the skin of animals and slaves, as a proof of ownership, and on the skin of criminals as proof of guilt. In Greece, Rome, and many parts of Europe convicted criminals were branded with specific marks that indicated their crime. French, English, Dutch, Spanish, and Portuguese slave traders branded their initials on slaves each time the slaves changed owners.

In the twentieth and twenty-first centuries, microcultures, such as the modern primitives and punks, utilize branding as body modifications. These brandings visually indicate group identity, personal identity, rites of passage, spiritual beliefs, and body decoration. Fraternity members, such as Michael Jordan and the Reverend Jesse Jackson, also have brandings of their Greek fraternity letters. These brandings indicate lifelong membership and commitment to their fraternity's ideals and bylaws.

Strike branding is the most common form of branding. A strike refers to an individual branding "hit" to the skin. Brandings can be created with either one strike or multiple strikes. The one-strike brand is pressed to the skin long enough to burn through all of the surface skin. The multiple-strikes brand divides the design into many smaller sections about an inch long, shorter if the branding has smaller details. Strikes will overlap and some areas may be re-branded for consistency. A uniform branding requires that all of the strikes be evenly distributed in relation to the surface of the skin.

The strike iron should be hot enough to cause third-degree burns to skin tissue, in order to form a permanent scar. Sources of heat can be anything from a propane torch to an open fire. Strike brand instruments are fabricated from metal, either as complete tools or as small, shaped designs held by a gripping tool. Metal retains and transfers heat effectively, quickly, and predictably to the skin.

Most strike branding tools are made from thin, high-grade stainless steel sheet metal. Other materials used as branding tools include the following: silver, copper, random metal findings, and ceramics. Thin materials are preferred for branding irons, because they are easy to heat and form, and decrease the risk of unwanted damage.

Cautery branding uses modern tools and technology, such as soldering irons and lasers, to apply the branding. An electrocautery unit, invented by Steve Haworth, has been called laser branding. This branding technology is similar to an arc welder, but designed for the skin. The body is negatively grounded while the positively charged electric spark jolts from the branding electrode to the skin, searing the skin tissue it touches. An electrocautery unit provides precise control over the depth of the brand and intricate nature of the designs. Cautery branding, regardless of the tools and technology utilized, is considered to be the most painful form of branding.

Freeze branding is similar to strike branding. Instead of putting the branding iron into a fire to heat it, it is immersed into liquid nitrogen or another cooling solution. The iron is then pressed into the skin. If the hair grows back it will be white. Freeze branding takes longer to do than fire branding and may take days to become visible, while fire branding shows results immediately. This branding method is extremely rare and not often used among body modification enthusiasts, but ranchers consider it as an extremely effective method for branding their livestock, because it does only minor damage to the hide and leaves distinctive branding marks of white hair. 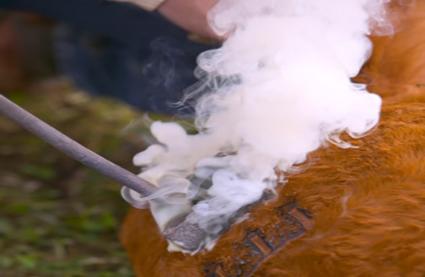 Branding fumes contain dangerous biological substances from the skin of the person being branded. While some of these airborne viruses and bacteria are dangerous to humans, the heat of the branding destroys most of these germs that can affect humans. Still, branders use HEPA air filters, ventilation systems, and respiratory masks while branding to prevent the transfer of airborne viruses and bacteria.

There are two schools of thought regarding the aftercare of brandings-LITA or "leave it alone," or irritation. Leaving the branding alone will allow the body to heal consistently; however, if a person is not genetically disposed to keloiding, the raised area of the scar will be minimal. Irritating a healing branding wound increases the height of the resulting scar; however, it also produces unpredictable healing and scarring. Picking or rubbing the healing area with steel wool or a toothbrush, or using exfoliating agents can successfully irritate the healing branding.

The healing process for brandings usually lasts at least a year. Separate from the pain of the branding procedure, during the healing process the branded area will be extremely sensitive and sore. If the branding is on a body part that flexes, it may cause the wound to tear open during movement. Healing brandings undergo a few phases, which vary in length and extremes from person to person. A branding will first scab over, which can last from a few weeks to just over a month. At this phase, the appearance of the branding is a bright red raised scar, which slowly becomes lighter than the normal skin tone. This phase lasts about twelve months, and the scar tissue may rise slightly more during this time.

The appearance of a healed strike branding ideally is a design of thick raised lines, lighter than the skin's natural tone. The height of the branding varies significantly on a large number of variables, such as the method of branding, body part and area branded, and skin texture. Strike brandings produce thicker, raised scars, whereas cautery brandings produce thinner lines. Brandings typically heal three or four times the width of the branding tool used to make it.

Cosmetic surgery claims the ability to remove a branding by using lasers or other advanced techniques; however, it is expensive and not always successful. Currently it is not possible to completely remove a branding without leaving some type of scar.

Comments
© 2006-2021 LoveToKnow, Corp., except where otherwise noted. All Rights Reserved.
History of Branding