The earliest evidence of the role of cosmetics in human society was found in the remains of artifacts used for eye makeup in Egypt of the fourth millennium B.C.E. Anthropological research also shows that there are several ways used by humans to transform the physical and social appearance of their bodies into cultural manifestations. People use their bodies and faces as objects of aesthetic elaboration or as a medium through which they can project themselves in religious and social life. We can thus identify two distinct, though related, senses of the term "non-Western cosmetic." The first pertains to personal taste and is concerned with the decorative/aesthetic aspect of non-Western cosmetic. The second is more general and is related to ritual and the symbolic essence of body decoration.

Decorative Cosmetic Practives Around the World

The ubiquitous interpretation of non-Western cosmetic in modern society is associated with the aesthetic or decorative. It is concerned with the visual and is related to personal style and denotes what is considered beautiful or fashionable. Non-Western cosmetic, in this case, is used in order to make a fashion statement. It is generally considered an exclusively feminine pursuit, used to aesthetically enhance the beauty of the person. Cosmetic and fashion industries make such physical appearances readily available under the rubric of the ethnic/tribal/oriental look. This look is epitomized by photographic studies of non-Western artistic practices and peoples confined to identifying what may be considered exotic and beautiful to the Western eye (Reifenstahl 1986; Ebin 1979; McCurry 1997).

Products originating from Africa, Asia, and South America and conceptualized in terms of respect for traditional beauty, natural or local ingredients, and non-animal tested products are sold in modern containers. This is meant to bring to mind ideas of purity, health, animal welfare, sunshine, adventure, travel, leisure, serenity, even exoticism and eroticism. Materials used include kaolin, henna, kohl, burnt cork, chalk, clay, and all sorts of vegetable, flower, and plant extracts. The growing demand for an exotic look in fashion has warranted their manufacture on a commercial scale. Production techniques, packaging, and advertising have helped to increase worldwide usage of such products. The best-known leader of this trend is the Body Shop. 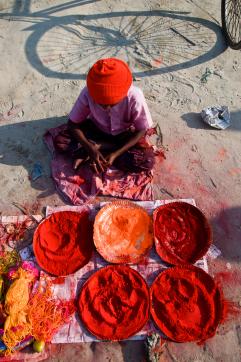 The image industry created by advertising agencies mediates the changing aspect of the human body image through fashion and art in glossy magazines and books. This has privileged the aesthetic/decorative and attenuated the transcendent nature of the art of body painting (Baudrillard 1994). Conversely, in tribal and non-Western societies, the aesthetic aspect of body and face decoration often emphasizes the social aspect of the human body (Leach 1966). Non-Western cosmetic can thus be understood by looking into the interpretative properties of cosmetic in terms of rituals and symbols. This is especially helpful for clarifying the meaning of body adornment during festivities, ritual ceremonies, or even everyday occasions. For example, Tilaka is a vermilion mark applied on the forehead by Indian women as a sign of being in wedlock. It is also used by both sexes as a culturally designed communication code, which embodies ritual and sacred symbols. Although red predominates, a variety of other pigments such as yellow, white, gray, saffron, and black are employed. In some cases these pigments are applied on the forearms and the abdomen as well. The origins of these practices are said to lie in a primitive tribal past. This is the case of followers of Shiva, a deity worshiped by proto-Aryan societies in the Indian subcontinent. Even today, the smearing of colors on arms, torso, or face is an essential aspect of the Hindu festival of Holi.

Women and men wear the Tilaka as a sign of belonging to the Hindu religion. Its versatile form, shape, and color also indicate adherence to the various Hindu sects and subsects. Worshipers of the Lord Vishnu apply a "U" sign made of a mixture of red ocher powder (Sindhura) and sandalwood paste (Gandah). Worshipers of the Lord Shiva prefer to draw three horizontal lines made of ash (Abhira). For men the application of Tilaka, made up of their own blood, is an indication of solemn commitment to an oath or a pledge being undertaken (Kelly 2002).

In tribal societies of tropical and equatorial regions the visual and interpretative value of body adornment is used as a schematic representation of values, beliefs, symbols, and myths. Differing pigments and patterns are used for instant recognition of group identity, social status, or age group, while still allowing for gender differences and personal idiosyncrasy. The most elaborate forms of decoration involve lengthy preparation, much care and expense, and hence are generally seen on ceremonial and ritual occasions. Men and women employ a combination of colors and designs in order to make a statement about the nature of a particular occasion. The adornment favored by individuals or group participants is intrinsic to the ceremony and is vital for conveying messages about the community's social and religious values. 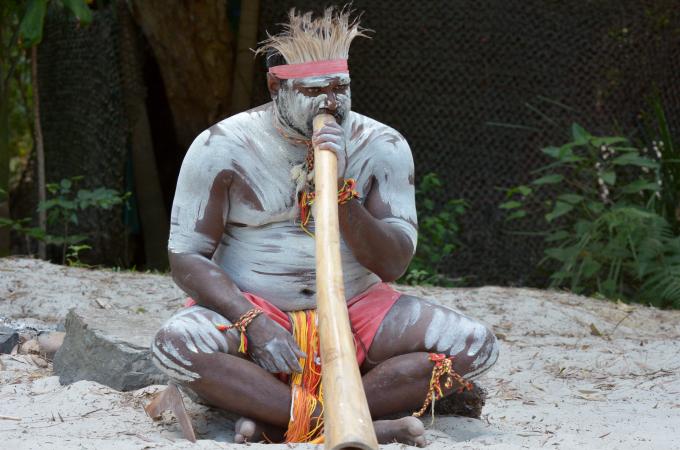 The Melpa and Wahgi of Papua New Guinea use body decoration as an essential part of ritual performances and gift exchange ceremonies. During happy occasions men paint their bodies and weapons with white wavy lines intended to represent patterns reflected in water. They adorn their faces with white and red pigments and place similar feathers and flowers in their hair to evoke "brightness." Bright colors symbolize the physical and moral strength, vitality, and well-being of the community. Conversely, war paint is deliberately meant to transform the human body into a terrifying warrior. In times of war, bodies are covered with a deep black charcoal-based pigment, a color associated with poison. Faces and accessories are similarly decorated with dark hues to transmit the message of aggressive power and fierceness. Women in Papua New Guinea wear less brilliant body decoration emphasizing their primarily domestic and agricultural duties. Similarly Australian aborigines paint their body and faces with white clay dots and lines prior to going hunting or war as a protective measure. They also decorate their bodies during initiation ceremonies or when they re-enact stories of their mythical past through music and dancing (Ebin 1979; O'Hanlon 1989, 1992; Strathern and Strathern 1983; Groning, 1996).

In parts of Africa and South America, design and color are used to separate the sexes and invoke magical powers, which are believed to be inherent in nature and the spiritual world. Tchikrin men from Central Brazil paint their bodies white and black; women prefer yellow and red. The Kayapo Indians of Brazil make a connection between the color red and abstract qualities such as heightened sensory sensitivity, energy, and health. They smear red pigments on their faces, hands, and feet, because they associate these parts of the body with swiftness, agility, and sensory contact with the outside world. Black is applied to the torso and signifies the integration of the inner man into social life (Turner 1969). Turning to West Africa, shamans in the Ivory Coast paint their eyes with white clay mixed with herbs and water from "sacred rivers" in order to see into the spirit world. Ghanaian priestesses smear their faces with white clay and paint parallel lines across their foreheads and cheeks. The color white represents the divine nature of the gods, while parallel lines are meant to deflect the attacks of evil mystical beings. Ashanti women from Ghana draw designs on their arms with white clay to invoke mythical protection for themselves and their babies after giving birth (Ebin 1979; Fisher 1984; Groning 1996).

People's preoccupation with rituals and symbols in social life often merges with their purely aesthetic impulses to decorate their bodies. Young Nuba men from the Sudan spend long hours applying elaborate designs all over their bodies to enhance the beauty, elegance, and well-being of their bodies. Their adorned bodies become a field upon which they demonstrate their physical beauty, sexual attractiveness, or personal status. Particular patterns or colors are used to portray in visible terms the individual's progress from infancy through puberty and adulthood or personal status within society. Deep yellow and jet black are only allowed to older age groups. Younger age groups are immediately recognizable by their use of red ocher and simpler hairstyles. The decline in physical strength and attractiveness in old age compels old men to cease to decorate their bodies, shave their heads, and start wearing cloth. Nuba women wear appropriate colors indicating their membership in a particular kinship group (Faris 1972; Brain 1979; Ebin 1979; Strathern and Strathern 1983; Riefenstahl 1986). The above examples of body and face decoration are not merely indicative of our tribal past. They are kept alive in the Western imagination through books on art and photography and their many fashion conscious modern imitators (Thevoz 1984; Vale and Juno 1989; Randall and Polhemus 2000)

O'Hanlon, Michael. Reading the Skin: Adornment, Display and Society Among the Wahgi. London: Trustees of the British Museum by British Museum Publications, 1989.

Riefenstahl, Leni. The Last of the Nuba. London: Collins Harvill, 1986.