Scarification, also known as cicatrisation, is a permanent body modification that transforms the texture and appearance of the surface of the skin (dermis). Although scarification operates as a controlled injury, it is not the result of an accident or health-related surgery. Branding, cutting, and some tattoo practices are types of scarification. In the practice of scarification the dermis and epidermis of the skin are cut, burned (see Branding), scratched, removed, or chemically altered according to the desired designs, symbols, or patterns. The result is a wound, which when healed creates raised scars or keloids that are formed on the skin's surface from increased amounts of collagen. Persons with darker skin tones have typically chosen scarification designs, because scars and keloids are more visible than tattoos.

The earliest evidence of scarification is the archaeological site at Ain Ghazal, in Jordan, where two headless figurines of Paleolithic (8000 B.C.E.) fertility goddess statues were found with thick scarification lines curving around the buttocks and abdomen. The Sahara rock painting (c. 7000 B.C.E.) at Tassili N'Ajjer at Tanzoumaitak, Algeria, also depicts scarification on the breasts, belly, thighs, shoulders, and calves of a Horned Goddess. Similar scar-ification designs as depicted on the figurines and paintings have been found on females from West and Central Africa.

The significance of the scarification process and resulting scars varies from culture to culture. Historically, scarification has been practiced in Africa, Australia, Papua New Guinea, South America, Central America, and North America. Among the cultural groups in these areas scarification has been used to emphasize the permanency of social and political roles; ritual and cultural values; rites of passage and age-grades; eroticizing the body; promoting sexual attraction and enhancing sexual pleasure; group and cultural identity; spiritual relationships; and aesthetic values. It has also been used as part of medicinal and healing rituals, as well as demonstrating the ability to endure pain. As a result of changing cultures and globalization, most of these scarification practices have been outlawed or banned by local governments.

In the twentieth and twenty-first centuries, Western microcultures, such as the modern primitives and punks, as well as fraternities and sororities, practice scarification. Scarification among these cultural groups varies in significance, such as group identity, personal identity, rite of passage, spiritual belief, and connection to tribal cultures. These microcultures utilize a variety of methods of scarification, such as cutting, packing, ink rubbings, skinning, abrasion, and chemical agents to acquire desired scarification patterns or designs.

Cutting is a form of scarification that involves cutting the surface of the skin with a sharp instrument, such as a sharpened bone, small medical scalpel, or razor blade, called a scarifier. Contemporary cutting tools may be either single-piece disposable units or blades that can be mounted on an assortment of handles. Cuts are about one-sixteenth of an inch deep; deeper cuts increase the amount of scarring and the chances of complications, while shallow cuts may heal without scarring, negating the purpose of the modification. 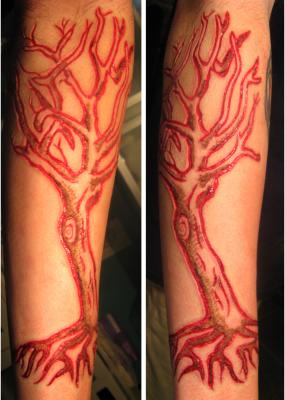 Scarification created with scalpel and cauterizer

Maintaining an open wound by repeatedly recutting the healing skin will result in a more pronounced scar; it will also delay the healing process and may result in serious health-related complications. Packing also creates more pronounced scars by introducing inert substances, such as ashes or clay, into the open incisions or lifting cut areas of skin and allowing the scars to heal around or over it. While cicatrisation can refer to any scar, it is usually used in connection with more pronounced scars resulting from packing.

Ink rubbing is a cutting in which indelible tattoo ink or other pigment is rubbed into a fresh cut. The ink remains in the cut as it heals, resulting in a colored scar. Although the intensity varies from person to person, this method creates more visible scars for lighter skin tones.

Skinning is a common method used to create large areas of scarification. An outline of the designated area to be scarred is cut. Then the scarifier or a lifting tool is placed under the surface of the skin to lift and remove it in manageable sections. An alternative skinning method, to increase the scarring, is to pack inert materials under the lifted skin and allow it to heal. The healing process is lengthy and complications may occur. This method creates large and more precise scarification areas.

Chemical scarification uses chemical compounds, such as liquid nitrogen, to damage and burn the skin, which results in scarring. Intricate designs are difficult to achieve with liquid chemical agents, otherwise the results are similar to other types of scarification. This method is relatively new and there is little research on it.

As with most permanent body modifications, scarification has been associated with aesthetic and health-related risks. The resulting appearances of the scars vary, because there are so many variables in the healing process. Scarification may take a year to completely heal, and longer if skinning or packing is involved. During the initial healing process diligent care is necessary in order to avoid infections.

Additional health-related risks include improper technique, such as cutting too deep, or acquiring blood-borne infections such as hepatitis B and C. Appropriate measures should be taken by scarification practitioners to assure the health and safety of their clients. Equipment and instruments that will be used for more than one client are sterilized in an autoclave, a high temperature steamer that kills blood-borne pathogens and bacterial agents. The area of skin to be scarred is disinfected and prepared by the scarification practitioner. During the scarification process, the skin is continually cleaned of excess blood and is disinfected.

Comments
© 2006-2021 LoveToKnow, Corp., except where otherwise noted. All Rights Reserved.
History of Scarification