African American dress intertwines with the history of Africans, who arrived in the Virginia colony in 1619. Within that century, southern codes forced the children of any enslaved woman to remain enslaved for life. West Africans continued to come unwillingly until the 1830s. President Abraham Lincoln proclaimed the emancipation of all enslaved peoples in 1863; but after the Civil War, African Americans lived on the margins of American society with poor jobs, substandard living and educational conditions, disenfranchisement, and public segregation. Nearly one hundred years later, in 1954, a Supreme Court decision began the desegregation process and in the 1960s, Federal legislation gave equal rights to African Americans.

Under enslavement, white owners demanded a certain form of dress for those in bondage: better dress for house servants and managers; poorer attire for field hands, children, and those too old to continue working. In spite of these constrictions, the nineteenth-century autobiographies and narratives, collected in the 1930s from formerly enslaved people, relate that African Americans put a great deal of thought into their dress. The narrators emphasized what clothing they had and did not have and described the clothing styles they desired and how they obtained them. "Correct" dress was especially important when "stepping out" for social occasions with community members, a habit that continues in the early 2000s. Narrators offered vivid depictions of dressing well for church, dances, and marriage.

Evidence shows that some retained West African forms of bodily adornment, particularly in the form of jewelry. From the African Burial Ground (1712-1795) in New York City, the remains of an adult female and an infant wore waistbeads as do West African women. Archaeological evidence from known slave sites sometimes includes cowries, seashells of economic importance before currencies became available in Africa and apparently worn as jewelry by the enslaved. The beads most often found at these sites consist of blue glass beads, worn as amulets in much of Africa and the Middle East. Former slaves provided testimony of wearing jewelry for both adornment and protection. Several Sea Islands narrators, for instance, describe single gold, loop earrings worn to protect the eyesight, retention of an African belief.

More outstanding as an African holdover than specific items of jewelry or clothing has been the interest in hairstyle and headwear by African American men and women. Documentation for West Africans' concern for well-groomed hair and ornamented heads is long-standing and survives among African Americans. Black men continue to sport ever-changing styles of facial hair and hairdos; the "conk" (straightened hair that is flattened down or slightly waved) of the 1930s remains a primary example. And, into the early twenty-first century, African American men consistently wear some type of headgear.

African American women also show a marked interest in their hairstyles and headwear. The slave narratives explain various ways of styling hair even under the most adverse conditions. Photographs of prominent women after the Civil War show them wearing the elegant, long, straight hairstyles in general fashion at the time. In 1906, this processing of the natural hair texture into straight hair spread across the country when Madame C. J. Walker began to market her highly profitable hair formula for managing African American women's hair. Black women also choose to wear hats, especially prevalent for church attendance.

With one exception, portraits from the eighteenth and nineteenth centuries, and nineteenth-century photographs, of African Americans show them wearing dress appropriate in general society. The exception is the African American woman's headwrap, the oldest extant specific dress item of any immigrant group worn in the early 2000s. But over time, its meaning changed.

In the antebellum South, several states legally enforced the code that ordered black women to wear a cloth head covering in public and not the hats and feathers worn by white women. These codes thus marked certain females as a subservient class. During enslavement, women working in onerous conditions wore the head wrap to keep the hair cleaner and to absorb perspiration. Use of the head wrap at home continued after the Civil War, but for public wear it was discarded. Beginning with the civil rights movement of the 1960s and 1970s, the head wrap took on other meanings. Young African American women again tied elaborate head wraps around their heads and publicly wore them in acknowledgment of their enslaved ancestors and as a reference to Africa and the way West African women adorn their heads.

During the civil rights movement, along with the head wrap, other young black revolutionaries adopted what they perceived to be West African attire, such as caftans and male head caps. Men and women grew their hair into enormous styles called "Afros," allowing for the natural texture to be emphasized in direct reaction against conks and Walker's straightening products that attempted to simulate European hair. Since the 1960s, some black men have continued to look back to Africa by wearing Rasta locks while black women have their hair intricately braided into elaborate African styles, often adding hairpieces.

Conveying a Place in Society

African Americans generally have dressed in the prevailing fashions along with other Americans. Portraits of early black clergymen offer examples. Slave narrative frontispieces, however, illustrate the author in either slave clothing or formally dressed as a freed person, the choice obviously expressed what the author wanted to portray about his or her place in society. After the invention of photography, the images of eminent leaders such as Frederick Douglass and Booker T. Washington always show them dressed in formal, gentleman's clothing. Between 1895 and 1925, black intellectuals, literati, and artists strove to present themselves as quite different from the racist stereotypical cartoon illustrations of "Mammys" and "Sambos" drawn by whites. Many illustrations show these "New Negroes" groomed and adorned in conservative, mainstream dress. 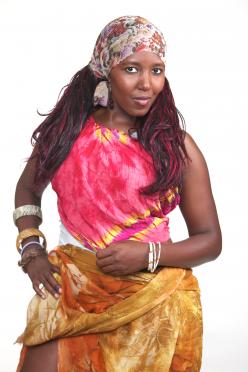 Although African Americans adopted the prevailing cultural dress of each period, their style often sets them apart. For instance, travelers' accounts about the South prior to emancipation describe African Americans' dress as more flamboyant and colorful than that of whites. Contemporary African Americans similarly prefer to be well dressed for most occasions and have not adopted the white population's sartorial trends to casual and even sloppy dress.

Part of the Cultural Scene