During the 1990s and the first years of the new millennium, ethnic style has been one of the strongest influences in fashion. Designers, such as Christian Lacroix, Dries van Noten, John Galliano, Kenzo, Vivienne Tam, Yeohlee and many others, have taken their inspiration from a variety of Asian, African, Arctic, Native American and several other dress forms and aesthetic styles and created colorful, syncretic styles evocative of the past or faraway lands. They have also found sources for ethnic fashion within the West, for example in the folk traditions of Northern and Eastern Europe. The fantasy element is strong in ethnic fashion; even when based on detailed research, designs are typically given a twist so they appear contemporary.

For many Western designers, non-Western aesthetics have provided a fertile subject matter, which has enabled them to develop creatively. This ability to break conventions is associated with a way of seeing, rather than faithful adherence to any particular ethnic style. The overall eclecticism of ethnic fashion is expressed, for example, by Dries van Noten, as noted in Touches d'exotisme, xive-xxe siècles:

"For me, exoticism is the elsewhere, the other, the difference. It is generally associated with distant countries. But for me, it is rather everything that reroutes us from the ordinary … from our habits, our certainties and from the everyday to plunge us into a world that is amazing, hospitable and warm. (p. 203) "

Fashion theory has been informed by the distinction between fashion-modern, changeable, and emanating from Western urban centers-and ethnic clothing-stable, oriented toward tradition, and belonging in the periphery. This distinction has not always been precise; however, it has had a profound influence on how society thinks about fashion. Many accounts of ethnic fashion thus tend to overemphasize the original reworking of exotic designs on the part of Western creators, just as they exaggerate the fixity of non-Western dress. In this respect, the ongoing impact of ethnic styles on Western fashion has been marginalized.

Historically, luxury has been associated with foreign origins. It is therefore impossible to date the starting point of ethnic style in Western consumption modes; in ancient times, novel and sumptuous goods arrived through trade routes from Persia, Egypt, and Central Asia, and later from India, China, Japan, Colombia, Mexico, and elsewhere. Designs and production methods of these imports were imitated, and whole industries-such as Italian and French silk production-were founded to cater for what had initially been a demand for exoticism. The taste for the foreign was also evident in the initial popularity of the cashmere shawl as a fashion item among European and American women from 1800 to 1870. Materials such as silk and cashmere are now fully naturalized in Western fashion, but from time to time their foreign origins are rearticulated in the context of ethnic fashion, for example in the recent trend for luxe povera.

Influence on Female Dress in the Early 20th Century

Looking at clothes design in a stricter sense, ethnic styles were an important element in the intense experimentation with female dress in the first decades of the twentieth century. Paul Poiret adapted the lines and silhouette of the Japanese kimono to contemporary dresses, and a few years later, he picked Middle Eastern inspiration to a sultan-and-harem mode of loose garments and bold color combinations. Mariano Fortuny combined inspiration from contemporary Middle Eastern clothing and European art, especially Italian renaissance, in pleated dresses that follow the lines of the body. His artistic dresses connote both timelessness-they are not made for special occasions or age brackets and are beyond the seasonal changes of fashion-and femininity that comes "from within," in the sense that it is less formal and less manifestly visible than the conventional gender code. 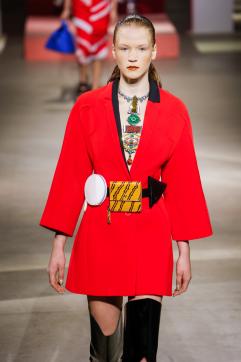 The second wave of ethnic fashion came in the late 1960s with such representatives in haute couture as Yves Saint Laurent, Kenzo, and Sonia Rykiel. Also in this period, ethnic style was associated with transcendence of conventions, thereby allowing perceived deeper sensual qualities to be expressed. The philosopher Hélène Cixous said about a jacket by Sonia Rykiel, and by implication about ethnic fashion as such: "A garment which is not a noisy manifestation of the street, but a fine manifestation of the world" (p. 97). She adds, "The dress doesn't separate the inside from the outside, it translates, sheltering" (p. 98).

An important issue is the position of non-Western fashion designers. When Japanese avant-garde designers, including Issey Miyake, Yohji Yamamoto, and Rei Kawakubo (of Comme des Garçons), presented the most sought-after collections in Paris in the 1980s, the international fashion press wrote them off as a mere exotic- in the pejorative sense of passing-influence. There was a tendency to interpret their designs in the light of traditional Japanese aesthetics, rather than acknowledge them as innovative designers working with a minimalism that self-consciously fused elements of East and West with very few overt ethnic references. In this respect, the Western fashion world has pushed non-Western designers towards self-exoticization. While some Asian fashion designers find it stimulating to apply their creative skills to their cultural backgrounds, others experience the demand for exoticization as devaluation of their talents and skills in the highly globalized fashion business.

In some markets, especially in the United States, there has been considerable recognition of non-Western designers; however, they have tended to remain identified with a particular ethnic style as aesthetic exponents of multiculturalism. A key example is Vivienne Tam: born in China, educated in Hong Kong, resident of New York City in the early 2000s. She incorporates Chinese motifs in her designs, but highly eclectically, so that her clothes have included both Buddhist and Maoist imagery. In contrast to Western designers, whose engagement with ethnic styles tends to be superficial, Tam's consistent work with Chinese aesthetics has led to a deep involvement with cultural tradition, including spiritualism, architecture, medicine, art, and performance.

There are also minority niche markets where diaspora women in the West find their salwar-kameez, the socalled Punjabi suit, or their Vietnamese ao dai. These markets are typically operated by women entrepreneurs without any formal training in fashion design. They tend to keep in touch with the styles current in the homeland; however, this does not stop them from influencing dynamics of fashion in the West, as was the case with the Punjabi suit in the late 1990s.

Ethnic style in fashion is an important, yet somewhat neglected, area of fashion studies. As fashion continues adjusting to the multicultural condition, both within each Western nation and at the transnational level, ethnic style provides a particularly rich and diverse field of study- one that is likely to produce major future developments in fashion theory.