The native peoples of North America are diverse in culture, language, and ecological adaptations to varied environments. This variation is expressed in their attire. The only major constant in their clothing prior to European contact was the use of the skins of animals-most notably the tanned skins of the variety of large North American mammals-buffalo or bison, antelope, mountain sheep, caribou, and others. Owing to its wide geographic distribution, deer was the most prevalent. Smaller animals such as mink, beaver, and rabbit were also used but mainly for decorative effects.

Native peoples in certain regional areas did create textile clothing technologies that mainly utilized fibers harvested from gathered plant products and sometimes used spun thread made from hair from both domesticated and killed or captured wild animals. From Alaska down through the gathering cultures of the Plateau, Great Basin, and California tribes as far to the southwest as the border of Mexico, woven products were worn literally from head to toe. Hats, capes, blouses, dresses, and even footwear were constructed of plant material. In the north, this practice reflected the deleterious effects of the constant dampness of the coastal temperate rain forest climate upon skin products, and in the south it was largely due to the scarcity or rarity of large animals for skins. For example, as a means to maximize available resources, several Great Basin tribes had developed a system of weaving strips of the skins of small animals (like rabbits) into blankets or shawls.

Before contact, the main decorative additions for clothing were paints and the quills of the porcupine and the shafts of stripped bird feathers. Entire feathers from a variety of birds were used as well, with the feathers from large raptors, especially the eagle, signifying prestige and sacred power among many tribes. Dyes and paints were used to color both the additive elements and the main bodies of the clothes themselves. These coloring agents were derived from plant and mineral sources, and in some areas very sophisticated systems for obtaining different colors from the local flora were in place. These products, as well as paints derived from regional mineral outcroppings, became important trade items.

Bone and shell ornaments were used as jewelry- bracelets, earrings, combs, and hair ornaments-and to a lesser extent as clothing ornaments. Extensive precontact trade routes existed for the distribution of these items, with the coveted shimmering abalone shells and the tapering conical dentalia shells that resembled miniature elephant tusks being traded from California and the more northerly Pacific Coast to the Great Plains and beyond to the Great Lakes region. Similarly, shells found in the Gulf of Mexico and ornaments cut from them were traded up river trade routes to areas in the Northern Plains, Midwest, and Great Lakes regions. A wide network also existed for the disbursement of the beads cut from Atlantic shells, later known to early European settlers as "wampum."

The only evidences of metallurgy north of Mexico occurred among the so-called Mound Builders of the Mississippi and Ohio valleys, where copper mined largely in the islands of Lake Superior and traded south to be turned into jewelry and other ornaments existed. On the Pacific Northwest Coast, exploitation of similar "native copper" deposits, allowed the nearly pure copper product to be exploited as jewelry, knives, and other implements. The unique metal shieldlike objects created were a pure demonstration of wealth, which represented prestige and status among the "Potlatch People" of the Northwest Coast. 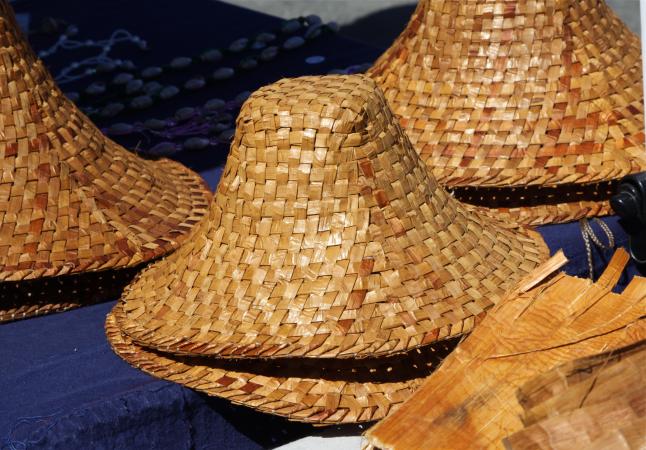 The abundance of resources in the Pacific coastal region led to the extensive use of various vegetation sources for clothing; in the north from Alaska to Northern California people relied upon evergreen root and inner-bark fibers, together with sedges, grasses, and ferns. As the rain forest climate gives way to marshy environments and grassy savannas in the south, the material from grasses and other smaller plants predominates. Nevertheless, this general area created some of the finest basketry products ever made by humanity, and a great array of basket-woven products was used as apparel. Large rain hats, caps, various forms of capes and wraps, dresses, kilts, leggings, and even shoes met the varying needs of the people of the western coast.

Peoples of the arid Southwest and Great Basin areas also wove clothing, but to a lesser degree, incorporating more skin products. Some sedentary tribes raised cotton that had previously been domesticated in Mesoamerica and had been traded north together with chilies, corn, and squashes as part of an agricultural diffusion.

The Hopi, for example, produced cotton mantas or women's dresses and sashes and kilts for men. Interestingly, the men wove their own apparel items in this culture.

In the Southwest in general, men tended to wear a belt and breechclout combination, while women wore either a skirt or kilt or a dress that covered the entire torso, depending upon the tribe. More warmth for the winter months was furnished by a robe of skin tanned with the hair on, of locally obtained deer, antelope, sheep, or of trade-obtained bison. Woven rabbit-skin robes were also used. Footwear appropriate to resist a rough, rocky environment and the often-thorned plants of the desert climate assumed increased importance.

In the far north, the Arctic culture area, the Inuit (formerly called Eskimo) often utilized skins processed especially with the fur retained in such a way as to combat the frigid weather. Fitted fur garments had hoods, which were bordered with specific species of fur to minimize the formation of frost around the edge due to the condensation of moisture from exhaled breath in extreme weather. Other areas of the clothing were specifically engineered as well, with some species' skins being used for specific traits in different areas of the garment. Seal was used for water resistance, caribou for insulative ability. Sealskin-soled mukluks or boots with formed soles were stuffed with dried grasses or mosses to provide insulation and protect the feet. The different species' skins were used in decorative fashion as well, with different tailoring demarcating various culture groups and gender identification. In addition, coastal groups created waterproof clothing of finely stitched seal intestine that enabled seahunters to venture out on frigid Arctic waters, allowing them to fasten themselves into their one-man kayaks in a leak-proof manner, when the intrusion of frigid seawater might have meant death, both for the kayaker and for those he was providing for.

Referencing the next cultural area south in the interior of the continent, the Athapaskan and Northern Algonquin also designed their clothing to stave off the hazards of the northern winter. Ironically, hazards of the possibility of thawing ground occasionally posed more danger than cold itself and thus changed the clothing design needs as opposed to those of their neighbors to the north. Additional decoration possibilities were afforded by the existence of porcupine and moose in the arboreal forest, allowing the use of quills and moose-hair as over-lay and embroidery elements. 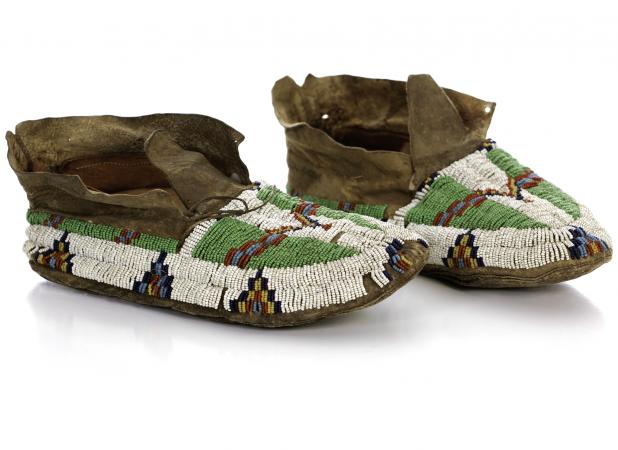 Indians of the Eastern Woodlands also decorated their clothing with quill and hair, both in embroidery and appliqué. Even inland tribes could obtain trade beads and shaped objects made by the coastal tribes from the coverings of the abundant shellfish. Deer, being the most common large animal, provided the most common skins utilized for clothing. Breechclouts, deer-skin leggings worn with each end tucked into a belt, were the norm in male attire, with women generally wearing full dresses. Moccasins in the wooded areas tended to be soft-soled, of tanned deer, moose, or caribou hide, often smoked over a smoldering fire to aid in resisting moisture prior to being cut up for the shoe's construction. Deer-hide robes aided in warmth during the cooler months. Some tribes in the area did develop a textile culture using fibers from gathered plants such as the stinging nettle; however, it was largely limited to smaller objects such as pouches, bags, and sashes.

By contrast, the tribes of the Plains had virtually no textile cultural history. In addition, the environment of the Plains area necessitated a change in the footwear technology, with most tribes favoring a two-part moccasin, with a tanned-skin vamp or upper attached to a thicker rawhide sole. As in the Southwest, this was a response to the more barren ground surface and thorned plants.

With the majority of the buffalo or bison in North America residing in this area, they assumed a central position in the cultures of the Plains tribes. This importance is reflected in clothing as well, with buffalo hide becoming a major resource. In the northern tribes especially, robes of buffalo hide tanned with the hair on were highly prized as winter attire, and often highly decorated.

In order to counter the monolithic image of the Native American, one must consider, in the early 2000s, the estimated 565 viable native groups in their proper cultural contexts to truly comprehend their rich cultural diversity, linguistic variation, and clothing and design of attire.

The long utilized Culture Area concept still has pertinence in postcolonial life. Within these coalescing areas, indigenous nations were grouped, mainly along the lines of material culture items-as among the Iroquois in the Northeast where longhouses sheltered several families together based upon matrilineal clan affiliation. There, a mixed hunting and agricultural economy was fostered by matrilocal residence and inheritance through the female and allowed a focus on seasonal ceremonies such as the midwinter and harvest festivals. Ceremonial-plaited corn-husk and carved wood masks were used in these and other rituals, often in the context of healing. Stranded belts of cut-shell beads rose above mere decoration, often being created to commemorate specific events. These wampum belts served as historic record-keeping devices. Quite a number of existing belts document treaties between native and European groups, for example.

One can select any area and explicate the clothing and adornment of the groups interacting with the environmental opportunity. The Northwest Coast consisted of various peoples speaking unrelated languages, but largely sharing a vibrant cultural lifestyle based upon the possibility for economic surplus afforded by the rich maritime environment. The most dazzling and elegant designs were undoubtedly those of the Haida from the Queen Charlotte Islands off the coast of present-day British Columbia in Canada. Their totemic art was embodied in monumental totem poles and decorated house villages, masks for ceremonial use, and the beautification of virtually every object type in the culture, whether utilitarian or decorative. This urge to beautify transferred to clothing as well, with masterful painting incorporating the same curvilinear stylized totemic themes on the woven hats and mats made from cedar bark and on skin robes and tunics as well. Chilkat blankets woven of mountain-goat wool and cedar bark were important prestige items owned by powerful individuals.

All aboriginal people of North America have under-gone coerced culture change by the colonizers. Although native beliefs, culture, and languages have been legally suppressed they have adapted and changed to new lifestyles. Many wear traditional styles adapted to new materials. In attire, they evidence modern styles in new fashions.