Roma is the Romani word used to refer to Gypsies, a label that has pejorative connotations. Since many Roma use the term Gypsy with outsiders, and there are contexts in which Gypsy is the broader term, its use is still applicable in certain settings and certainly appears in literature as well as search engines. In Europe and the British Isles, terms such as Romanies, Travelers, or Tinkers are also used. Many different groups form the Roma population based on a common sense of belonging, although they may have very diverse characteristics and call themselves by different names.

Roma Around the World

Roma live in the United States, South America, Europe, Russia, Middle East, North Africa, and North and Central Asia. Some have migrated to Australia, Hawaii, and Alaska as well. The Roma migrated into Eastern and Western Europe in the fourteenth century through Persia en route from India, which they left approximately 1,000 years ago. Since leaving India, Roma have always lived within another culture or country as a minority and pariah group. They have been subjected to extreme discrimination and persecution throughout history, especially in Western and Central Europe where they were enslaved in the Middle Ages. Between 500,000 and 600,000 European Roma perished under the Nazis in World War II. In the nineteenth century they migrated to North and South America where they continue to be a nomadic or semi-nomadic group.

Roma in the United States are estimated to range between 100,000 and 300,000 members of various groups (such as Vlach Roma, Boyash, Irish Travelers, and Hungarian Roma) living in all parts of the country. Estimates of Roma in Europe are between 4 and 10 million, with the largest numbers concentrated in Central European and Balkan countries (as much as 5 percent of the population). Different groups have taken up various occupations, including music, metal work, buying and selling horses or cars, fortune-telling (primarily women), and selling craft items. Middle-class Roma have entered the professions, but in the early 2000s this was still a relatively small group.

Roma trace descent through both parents but take on patriline names and have a patrilocal marriage preference. Authority is based on age, with both older women and men enjoying a high status. Men are powerfully situated in the system of juridical authority, and women hold power through the complex system of religious, spiritual, and medical authority. Roma have no religious specialists other than older women, but they use clergy from local churches to conduct baptisms. In the United States their own religion is punctuated by certain rituals, including the baptism of a six-week-old child, marriage, the pomana (death ritual), slava (Saint's Day feast) and some American holidays, such as Easter and Thanksgiving. 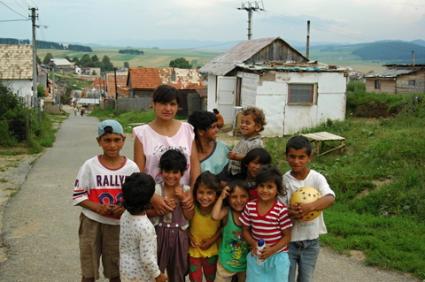 In the United States, Roma generally live in urban areas, usually on main streets and in the poorer parts of towns. They are not as easily recognizable to the American population as they are in Europe, where they stand out more. They often prefer to represent themselves as a member of an ethnic group other than Roma since it abates the stereotyping and discrimination against them. One of their survival mechanisms is to keep to themselves and avoid contact with non-Roma except in work-related circumstances.

The Roma wear clothing that reflects their religion, customs, and ethics. Many Roma, both men and women (but not children), treat clothes worn on the upper body separately from clothes worn on the lower body. Upper and lower body clothes may be washed separately as the lower body is considered "impure," and it is desirable not to "pollute" the upper body. The head in particular is protected from impurity. Hats worn by men and scarves worn by married women are kept away from any surface (such as the seat of a chair) or other clothes that touch the lower body. In addition, men's clothes may be kept separate from women's clothes, and women's skirts are considered dangerously polluting to a man. Women must wear a skirt long enough to cover their legs at least to the mid-calf. Items (such as dish towels) that are used with food are also given particular attention to purity.

During ritual occasions, the Roma often purchase or make new clothes to wear. New clothes have never touched anyone's body and therefore are guaranteed to be pure. A Saint's Day feast, wedding, or pomana (death ritual) are occasions when special pure clothing is desirable. During the pomana, a living person representing the deceased is dressed in new clothes and is called "the wearer of the clothes." This person stands in for the spirit of the deceased who is thought to be watching the po-mana to make sure the relatives are displaying the proper respect for the dead.

The presentation of self through dress and fashion is very important to the Roma and part of their public performance as Roma. Roma fashions do change over time and place. Furthermore, fashions for men and women seem to be based on different criteria. Whereas men dress to present an image to the outside world that they associate with power and authority, women dress to present an image to the Roma that is associated with Roma ideas of the power of purity and pollution. 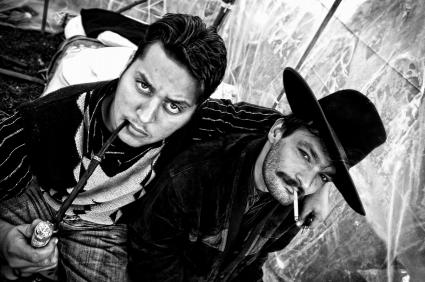 In the United States Roma have adopted fashions that project a particular masculine stereotype, often gleaned from the movies. Their public and private appearance is a performance of a certain recognizable style that they associate with masculinity and authority. They are not concerned with being stylishly up-to-date, rather they are concerned with the images of power projected by the clothing. Examples of commonly seen styles include:

Young men who are not yet old enough to present an image of power may adopt a more youthful modern dress. For example: (1) Beatles attire-pencil thin tie, loud tight shirt, and stovepipe pants; (2) Spanish or Hungarian Gypsy musician-longish hair, red diklo at the neck, "Gypsy" shirt; or (3) Modern-shirt and baggy shorts. 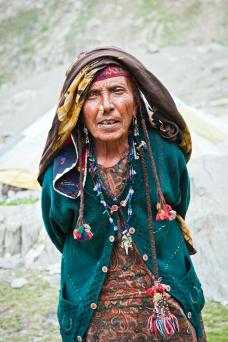 Women are interested in fashion that shows their sense of "shame" and their status as guardians of purity for the family. Because of this role, women are expected to cover their legs at least to the mid-calf. Married women traditionally cover their head with a scarf and tie their long hair up or braid it. There is no shame associated with showing a low-cut neckline; in fact, it is rare to see a woman who does not wear low-cut tops. Women may wear modern western clothing when they do not want to be recognized as Roma. Some, for example, wear "Hopi" Indian dress to "pass" as American Indians. Even within these limitations, women have a great deal of leeway to adopt different styles:

In general, children are considered pure until puberty and do not have to worry about being polluting or being polluted. Mostly they wear current store-bought American clothes. Very small children can wear shorts or tank tops. Boys wear jeans and a shirt, and on special occasions a suit. Girls wear dresses or pants, and on special occasions long dresses. They usually have long hair hanging down or a ponytail.