Southeast Asia is recognized for its legendary aesthetic in traditional woven textiles (Gittinger and Lefferts 1992). The region of Southeast Asia includes eleven countries: Brunei, Cambodia (Khmer), Indonesia, Malaysia, Singapore, Vietnam, Myanmar (Burma), East Timor, Laos, the Philippines, and Thailand (Siam). Its geography is composed of both mainland and insular areas. In spite of the differences in language, culture, and religion, the forms of textiles and clothing are remarkably similar.

People of mainland Southeast Asia inhabit the countries of Thailand, Cambodia, Laos, Myanmar, and Vietnam. The origins and migration patterns of these people are still debated by historians and anthropologists. Minority ethnic people who settled along the border areas of the countries are referred to as hill tribes. These hill-tribe people migrated over 1,000 years ago from the southern part of China into Laos, Myanmar, Vietnam, and Thailand. Hill tribes in Southeast Asia include Karen, Hmong (Meo), Yao, Lisu, Lahu, Lawa, Palong, Khamu, Thins, Mlabri, and Akha. Each tribe has its own distinct culture, religion, language, and arts. They make their homes in the highlands, maintaining an agricultural lifestyle and preserving their way of living with only slight changes. Both lowland and highland Southeast Asian people have created rich textiles representing their unique aesthetic in fashion and clothing.

Clothing forms worn in Thailand, Laos, Myanmar, and Cambodia are quite similar. Influences from India and China, carried through trade and religious teachings, are evident in clothing styles. Archaeological evidence, mural paintings, and ancient sculpture indicate that the people in this region were weaving textiles more than 3,000 years ago, and these textiles were often used to wrap the body. Women are depicted in both mural paintings and ancient sculptures wearing ankle-length wrapped skirts. Men are depicted wearing loincloth-type garments. A wrapping cloth could also be used to form a shawl to protect and conceal the upper body (Prangwatthanakun and Neanna 1994). It appears that wrapping styles varied depending on the occasion of wear and the activity of the person.

Traditionally, Thais and Laotians most likely used cotton for everyday wear and silk for special occasions. Wrapping cloths and ties were used in different combinations to create garment ensembles. Wrapping cloths were worn extensively despite the fact that they required more fabric than tailored apparel. An advantage was that the uncut yardage was used for many purposes, including covering for warmth, repelling mosquitoes and other insects, and as a towel for bathing.

Thai and Laotian women wore upper body wrap-pers, while men did not cover the upper body. Women's wrappers for the upper body provided coverage or adornment, and could also indicate social status. Typically women wore one wrapper as a covering cloth and one wrapper as decoration. The women's upper torso wrap-pers included breast cloths, called pha taap, and shoulder cloths or shawls, called pha klum lai. An upper torso wrapper for decoration made of pleated silk was called sabai. 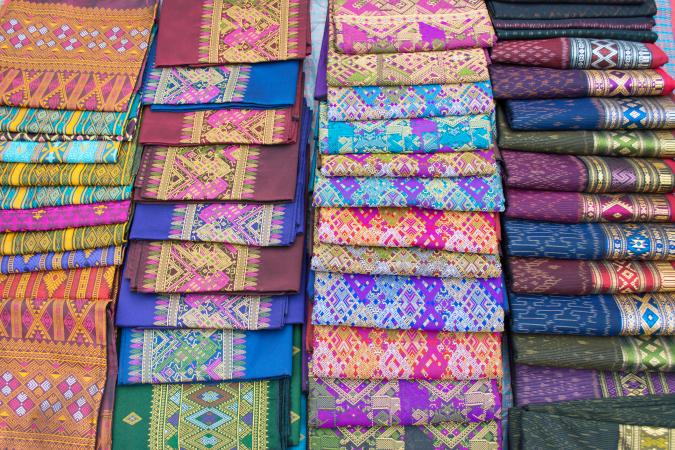 Lower body wrappers were called pha sin or pha sarong in Thailand, and in Cambodia, sampot. Women usually used a piece of rectangular fabric to wrap the body, tucking in an end at the waist to form an ankle-length tube skirt. Knee-length skirts were worn for work activities such as harvesting rice. Men also wore wrapped textiles but the garment was called pha khao ma. Pants were also created by wrapping fabric around the body. Wrapped garments from India were the original influence for the wrapping pant. In the Sukhothai period (1238-1377 C.E.), wrapping pants, pha chongkraben, were adopted by Thai society from Cambodian costume.

The wrapping pant is formed with one long rectangular piece of fabric. The fabric is wrapped around the body, tied at the waist with excess fabric rolled or folded to pass between the legs from front to back where it is twisted and tucked in at the waist. A short style called thok kamen, typically worn by men, provided comfort and convenience when working. Women did not wear short wrappers, but typically wore garments that provided full coverage for the lower body.

Fabrics and garments symbolized social and organizational patterns that differed throughout the reign of the monarchs. A common person wore no shirt, or a shirt made of poor quality cotton with pha chongkraben. Fabric was plain or printed, with silk brocade worn by the wealthy. People of the upper social tiers wore elaborate, highly decorated fabrics, including brocades woven with gold or silver yarns. Special occasion fabrics-silks, satins, metallic brocades-were often imported from India and China.

High-ranking women, royalty, or nobility wore very large pieces of cloth gathered, pleated, and tucked in luxurious folds. The pha sin (skirt or tube skirt) was made of highly glazed cotton cloth made in India for the Thai market. The glazed finish was renewed after washing by polishing the starched cloth with a seashell (Prangwatthanakun and Neanna 1994). Children were often naked or wrapped in a length of cloth similar to adults. A child might wear a casual blouse made of woven cotton worn with a garment similar to pha chongkraben. Children from upper classes were adorned in elaborate, embroidered fabrics and wore ornaments such as bangles, bracelets, necklaces, ankle-lacings, and hairpins.

Cambodian men wore sarong and the women wore sampot with a shirt or blouse. Burmese men wore a head wrapper while wearing sarong. Sampot is approximately 40 inches (1 m) wide and as much as 120 inches (3 m) long. Special occasion sampot and sarong were woven of silk, and embroidered with gold or silver threads. Sampot and sarong can be worn with a long piece of fabric gathered at the waist, passed between the legs, and tucked into the waistband in back like pha chongkraben worn in Thailand. Typically, Cambodian women wore dark colored (black, dark blue, or maroon) sampot with short-sleeved plain blouses. An essential part of Cambodian traditional clothing is the karma. It is a long scarf that can be worn around the neck and over the shoulders. It also can be wrapped turban-style around the head and loosely knotted. Cambodians living near the border of Vietnam adopted the Vietnamese conical hat style. 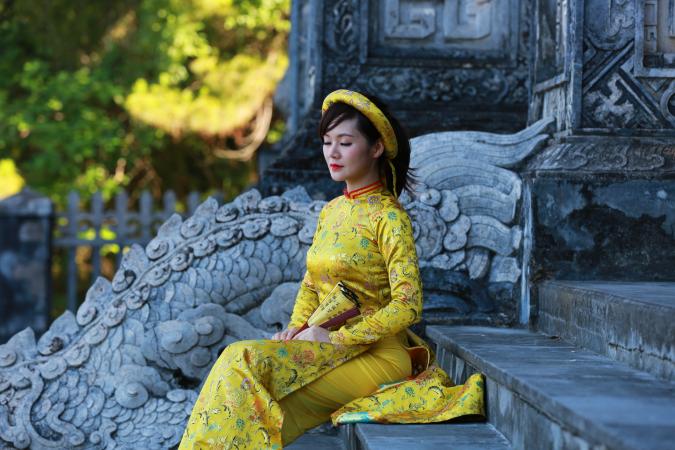 Vietnamese traditional clothing presents strong Chinese influence. The garment called ao dai (pronounced "ao yai" in the south and "ao zai" in the north) is a cutand-sewn form of clothing instead of a wrapping cloth. Ao dai is a long body-hugging gown worn over trousers. The sheath is split at the sideseam hem to provide ease of movement and comfort. Girls wear pure white ao dai symbolizing their purity. Soft pastel shades are worn by young, unmarried women. Married women wear gowns in strong, rich colors, usually over white or black pants. Men wear ao dai less often, generally only for formal ceremonies such as weddings or funerals.

Other hill tribes, such as Hmong, embellish their clothing with detailed embroidery and silver jewelry. Women traditionally make clothing for their families from cotton or hemp. Hmong women wear pleated skirts with intricately embroidered bands of red, blue, and white. Black satin jackets provide a somber background for the embroidered motifs. Silver ornaments are worn during ceremonies devoted to the sky spirit. 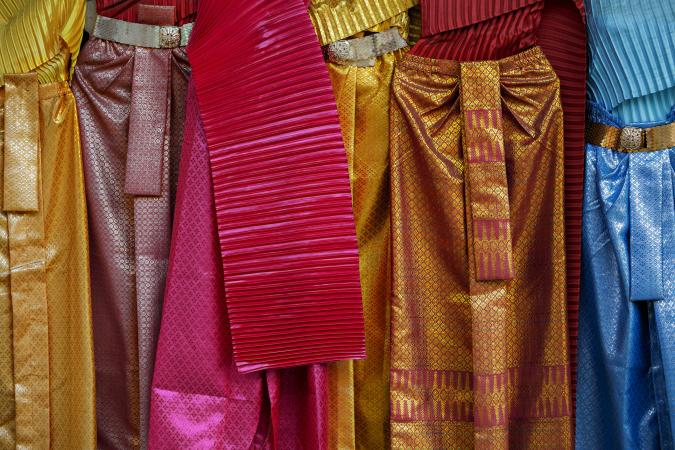 There are four major periods of Thai history: Sukhothai, Ayuthaya, Thonburi, and Rattanakosin. The Sukhothai period (1238-1377 C.E.) exhibited a very rich culture. The country was free from serious war, agriculture developed, and food was plentiful. In this prosperous climate, craftsmanship flourished and elaborate textile techniques and styles developed. However, garment fabrics for high-ranking people were imported from China, India, and Persia. The wrapping style, pha chongkraben, was adopted from Cambodia during this period.

The Ayuthaya period (1357-1767) is known as the golden period of textile trade. Ayuthaya, the ancient capital city, is located 50 miles (76 km) north of Bangkok.

During this period Thailand was a major trading center. Agents from Holland, France, the Middle East, Persia, India, Japan, and insular Southeast Asia worked in the country to facilitate the textile trade. Fabrics were imported from many countries, including silk and satin from China, chintz from India, pha poon from Cambodia, and some fabrics from Europe. Fabrics used for high-ranking people were elaborate and often made to order. In contrast, textiles worn by common people were woven by villagers and exchanged in a barter system (Gittinger and Lefferts 1992).

During the Thonburi period (1767-1781), a short span of time between Ayuthaya and Rattanakosin, there was a decrease in the textile and fabric trade. Fashion and styles of the Thonburi period did not change substantially from the Ayuthaya period. The current period, Rattanakosin (1782 to present day), was established by King Rama I (1782-1809) in the royal house of the Chakri monarchy. King Rama V (1868-1910) initiated changes in clothing, and white, satin long-sleeved shirts became popular. Similar to other mainland Southeast Asian countries, westernization emerged as the prevalent style of clothing. Methods of making textiles and apparel gradually changed from handicraft to manufacturing. Plain, dark blue silk replaced traditional elaborate fabrics. Royalty dressed according to their position, with color indicating rank and status (1910-1925) (Gittinger and Lefferts 1992).

Globalization and advances in technology have affected Southeast Asian society and lifestyles. High-ranking people and nobility adopted Western, tailored garments that were seen as fashionable. Although Thailand was never colonized by a European power, Western styles of clothing were readily adopted and became fashionable. Tailored garments gradually replaced wrapping cloths as the form of everyday dress. Men adopted neckties, bowties, and suit jackets if they could afford them, even though these close fitting, restricting styles are not comfortable in the tropical climate of Southeast Asia. Women transitioned from wearing the breast cloth and pha sin or pha chongkraben to wearing blouses and skirts. The adaptation pace of Western clothing differs from country to country.

By the beginning of the twentieth century, tailored garments were prevalent. Traditional clothing gradually disappeared from metropolitan areas. In the twenty-first century traditional styles of clothing can be seen as special occasion dress or worn in rural areas as everyday wear. In urban areas men wear suit jackets, trousers, and shirts to the office and women wear pants, skirts, shirts, blouses, and dresses. As the popularity of traditional clothing forms decreased, efforts have been made to motivate people to wear traditional clothing. High quality textiles with traditional embroidered or printed motifs have been developed to be attractive and suitable for today's lifestyles and fashionable wrapping cloth styles are being developed to appeal to the modern consumer.