Exaggeration of the feminine posterior has been a periodic theme in Western fashion for several hundred years. The pulled-back overskirts of late-seventeenth and early-eighteenth-century mantuas (loose-fitting gowns) emphasized this area, and pads or "cork rumps" sometimes supported the swagged-up styles of the late 1770s and 1780s. Even early-nineteenth-century neoclassical dresses often featured a small back pad-a so-called artificial hump-to give the high-waisted line a graceful flow. As waists lowered and skirts widened, the pad was retained, and by the late 1820s it was called a bustle. Throughout the mid-nineteenth century full skirts were enhanced by a small bustle made of padding, whalebone, or even inflatable rubber. In the 1870s and 1880s, however, both the skirt support and the silhouette created by the bustle became the focus of fashion.

In an age when men and women were considered to have distinct social roles, the late nineteenth century assumed the natural forms of the two genders also diverged. One arbiter of etiquette and aesthetics, "Professor" Thomas E. Hill, explained that, in contrast to the broad-shouldered male, the female figure is characterized by narrow, sloped shoulders but width across "the lower portion of the form." He stated that to avoid looking "masculine and unnatural," women's dresses should be tight on top while dressmakers are "permitted to arrange tuck and bow and flounce without stint below the waist." These enhanced derrieres proportionately lessened women's small waists, produced by corseting. The idea that women are naturally steatopygous or fat-buttocked is no more aberrant than the late-twentieth-century idea that all women should have "buns of steel."

The bustle, also known as a tournure, pannier, or dress improver, could be made in a wide variety of materials and shapes. Some types were full length, such as sprung steel half hoopskirts called crinolettes and petticoats with adjustable inset steels. Many bustles, however, were made to pad only the rump area, secured to the wearer by a buckled waistband. These could be simple rectangular- or crescent-shaped pads filled with horsehair or other stuffing, but more intricate forms included down-filled devices and puffed or ruffled constructions of crinoline or stiff fabric such as tampico hemp. Woven wire mesh bustles were advertised as not only cooler than padding, but uncrushable, eliminating the need for furtive rearrangement after sitting. Other structures featured several metal springs arranged vertically, placed a large crescent-shaped spring horizontally below the waist, or had projecting steel half hoops that adjusted with lacing and claimed to cleverly fold up when the wearer sat down. 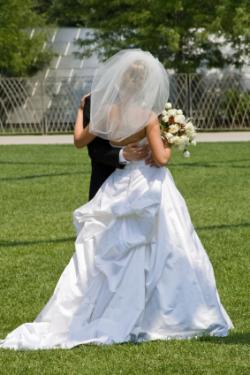 The material used to create bustles was seemingly endless: M. V. Hughes in her memoir A London Child of the Seventies (Oxford University Press, p. 84) recalls that an acquaintance used The Times newspaper to achieve her effective bustle, saying, "I find its paper so good, far more satisfactory than the Daily News." Petticoats, often with layers of ruffles down the back, helped smooth the line of the bustle pad and support bustled skirts.

By 1868, the fullness of women's skirts had moved to the back, and a bustle was needed to support fashionable puffed overskirts and large sashes. The high back interest continued in the early 1870s as the bustle gradually swelled in size. Although the back of the skirt remained the dominant feature, the silhouette slimmed down after about 1875, when the skirt and petticoats, drawn back low and close to the figure and usually flowing into a long train, were often unsupported by a bustle. In the early 1880s, the bustle returned in dramatic proportions, often forming a shelflike protuberance at right angles to the wearer's body. An examination of images of fashionable women in extreme bustle dresses would lead an impartial observer to conclude-as Bernard Rudofsky proposed in the 1940s-that skirts shaped in this peculiar way must contain a second pair of legs behind the women's normal ones.

The wardrobe of a woman of the time included a chemise, drawers, corset, corset cover, stockings, and several petticoats, as well as a bustle. The bustle's size was accentuated by all the features of fashionable dresses, including tight sleeves, tight-fitting bodices with back tails, and elaborately constructed skirts with back poufs, swags, gathering, pleating, draperies, and asymmetrical effects. While a few called for reform of feminine dress for artistic and health reasons, most accepted women's convoluted clothing as in accord with High Victorian taste, with its love of the ornate, ostentatious, and overdone. A fashionable woman, dressed in a horsehair or spring bustle, layers of undergarments, and rich, heavy fabrics trimmed with fringe, did present an upholstered effect, similar to an overstuffed sofa of the time, both expensive, decorative objects. In 1899, Thorstein Veblen's The Theory of the Leisure Class introduced ideas, such as the conferring of status by "conspicuous consumption," reflecting the bustle period's excesses. Yet to most contemporaries, highly contrived feminine clothing was not seen as contradictory to the spirit of this "age of progress," but rather as a concomitant of civilization, showing commercial enterprise and mechanical ingenuity and firmly establishing the "civilized" division of the sexes. Throughout the period, although ridiculed, the bustle silhouette was widely accepted and worn by women from all classes, as well as by little girls with their short skirts. As The Delineator noted in February 1886 (p. 99), some women did not wear a bustle pad, "except when such an adjunct if necessitated by a ceremonious toilette," relying instead on a flounced petticoat to support the drapery of simpler dresses.

After about 1887 the bustle reduced in size and skirts began to slim. The skirts of the early 1890s featured some back fullness, but emphasis had shifted to flared skirt hems and enormous leg-of-mutton sleeves, and bustle supports were not as fashionable. With skirts fitting snugly to the hips and derriere in the late 1890s, however, some women relied on skirt supports to achieve a gracefully rounded hipline that set off a small waist. While not as extreme as examples from the mid-1880s, the woven wire or quilted hip pads worn beyond the turn of century show the tenacity of the full-hipped female ideal.

Despite some historians' view that bustle fashions were surely the most hideous ever conceived, this very feminine silhouette has continued to fascinate. In the late 1930s, Elsa Schiaparelli made playful homage to the bustle in some of her sleek evening dresses, while late-twentieth-century bustle interpretations by avant-garde designers, such as Yohji Yamamoto and Vivienne Westwood, have utilized the form with historically informed irony.

Hill, Thomas E. Never Give a Lady a Restive Horse. From Manual of Social and Business Forms: Selections. 1873. Also from Album of Biography and Art. 1881. Reprint, Berkeley, Calif.: Diablo Press, 1967.