The term "tight-lacing" refers to the laces that tighten a corset. There is no generally accepted definition of what constitutes tight-lacing since it could be argued that any corset that is not loose is tight. Furthermore, there is no agreement as to how tightly corsets were usually laced. Some nineteenth-century writers argued that any use of the corset was dangerously unhealthy, whereas others tolerated or praised "moderate" corsetry, reserving their criticism for tight-lacing, however this might be defined. When they mentioned measurements at all, they variously defined tight-lacing as a reduction of the waist by anywhere from three to ten inches. That is, depending on the definition, a natural waist of, say, 27 inches might be reduced to a circumference of anywhere between 24 inches and 17 inches.

John Collet's caricature Tight Lacing, or Fashion Before Ease (1770-1775) depicts a fashionable woman clutching a bedpost, while several people tug strenuously at her stay laces. Anyone who has seen the movie Gone with the Wind (1939) can picture Scarlett O'Hara in a similar situation, exclaiming that if she cannot be laced down to 18 inches, she will not be able to fit into any of her dresses.

Published accounts of extreme tight-lacing in Victorian periodicals, such as The Englishwoman's Domestic Magazine (EDM), describe young women reducing their waists to sixteen inches or less. For example, a letter signed Nora was published in the EDM in May 1867, claiming to have attended "a fashionable school in London" where "it was the custom for the waists of the pupils to be reduced one inch per month. When I left school … my waist measured only thirteen inches." Another letter signed Walter appeared in November 1867: "I was early sent to school in Austria, where lacing is not considered ridiculous in a gentleman … and I objected in a thoroughly English way when the doctor's wife required me to be laced. A sturdy mädchen was stoically deaf to my remonstrances, and speedily laced me up tightly … The daily lacing tighter and tighter produced inconvenience and absolute pain. In a few months, however, I was … anxious … to have my corsets laced as tightly as a pair of strong arms could draw them."

Between 1867 and 1874 EDM printed dozens of letters on tight-lacing, as well as on topics such as flagellation, high heels, and spurs for lady riders. Later in the century, other periodicals, such as The Family Doctor, published letters and articles on tight-lacing. The notorious "corset correspondence" has been cited by some writers, such as David Kunzle, as evidence of extreme tight-lacing during the Victorian era. 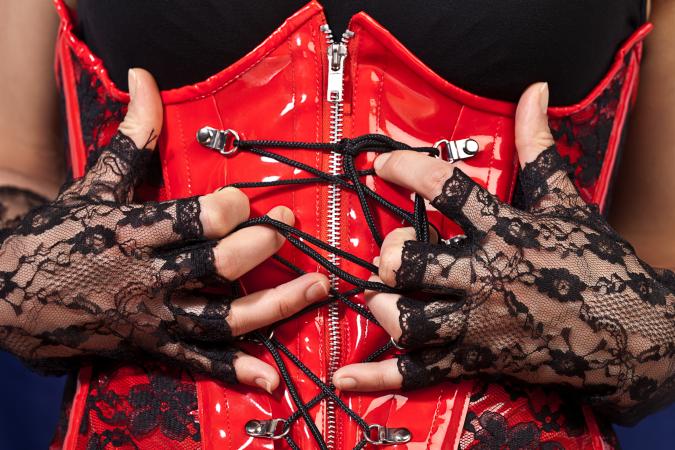 However, most scholars in the early 2000s believe that these accounts represent fantasies. Indeed, by the end of the century, the tight-lacing literature becomes increasingly pornographic, as fetishist themes overlap with sadomasochistic and transvestite scenarios. Such accounts may well indicate the existence in the later nineteenth century of sexual subcultures where corset fetishists (most of whom were probably men) enacted their fantasies in settings such as specialized brothels, where they paid prostitutes to role-play as sadistic governesses. Yet this is a far cry from the use of corsets in ordinary women's lives.

The popular belief that many Victorian women had 16-inch waists is almost certainly false. Corset advertisements in the second half of the nineteenth century usually give waist measurements of 18 to 30 inches, and larger sizes were also available. Within museum costume collections, it is rare to find a corset measuring less than 20 inches around the waist. Moreover, as the author of The Dress Reform Problem (1886) noted, "A distinction should be made between actual and corset measurements, because stays as ordinarily worn, do not meet at the back. Young girls, especially, derive intense satisfaction from proclaiming the diminutive size of their corset. Many purchase 18- and 19-inch stays, who must leave them open two, three, and four inches. 15, 16, and 17 inch waists are glibly chattered about … [yet] we question whether it is a physical possibility for women to reduce their natural waist measure below 17 or 18 inches."

This is not to say that women did not use corsets to reduce their waists. Writing in 1866, the English author Arnold Cooley claimed that, "The waist of healthy women … is found to measure 28 to 29 inches in circumference. Yet most women do not permit themselves to exceed 24 inches round the waist, whilst tens of thousands lace themselves down to 22 inches, and many deluded victims of fashion and vanity to 21 and even to 20 inches."

The discourse on tight-lacing needs to be analyzed in ways that move beyond simple measurements. Because the practice of tight-lacing was so ill-defined and yet was perceived as being so ubiquitous in the nineteenth century, it became the focus of widespread social anxieties about women.

Decline of the Corset

Tight-lacing disappeared as a social issue with the decline of the corset as a fashionable garment in the early twentieth century. However, there still existed individuals who wore tightly laced corsets. In the mid-twentieth century, Ethel Granger was listed in the Guinness Book of World Records for having "the world's smallest waist," which measured 13 inches. In the early twenty-first century, the most famous tight-lacer is probably the corsetier Mr. Pearl, who claims to have a 19-inch waist. His friend Cathie J. boasts of having reduced her waist to 15 inches.