The clothing known as activewear in the early 2000s traces its origins back to the high-performance sportswear designed for mountaineering, sailing, and hiking that became popular among urban youth during the 1970s.

By the 1980s, such utilitarian styles swept through college campuses in North America, and, subsequently, sneakers were worn with suits, backpacks replaced briefcases, anoraks were paired with deck shoes, and sweatshirts were combined with khaki trousers or jeans. As the style began to characterize the sporty chic of city dwellers and coed campus life, activewear became a staple of the modern wardrobe.

While activewear is often regarded as a contemporary style, the combination of street clothes, travel accessories, and sportswear is nothing new. In the 1930s and 1940s, the American designers Bonnie Cashin, Claire McCardell, and Vera Maxwell updated garments produced for travel, leisure, and sport with vestiges of high fashion. The designers made functionality a statement of style by producing easy-fit, loosely constructed clothing in fabrics such as wool, denim, and calico. One of Cashin's signature garments was an overcoat with an integral purse, while Maxwell designed a jacket with builtin bags rather than pockets. Such garments were conceived as urban tools that expanded into wearable luggage, widening the appeal of apparel that could maximize the performance of clothing as well as the body's ability to transport necessities with ease.

For several decades, activewear was characterized by bulky, loose-fitting garments. As the body-conscious styles of the 1990s took hold, activewear gradually became more tailored and form-fitting, yet continued to suit the active leisure interests of urban dwellers. Dress codes became more fluid as Rollerbladers, inner-city cyclists, and speed-walking pedestrians dressed in smart basics that moved easily and provided protection from adverse weather. Mobility and versatility became key considerations for professionals, who started commuting to work in sneakers and multifunctional outer garments. Many were made with detachable hoods that transformed over-coats into raincoats as they were buttoned or zipped into place, or designed with removable collars and detachable sleeves that could be adapted to weather changes. 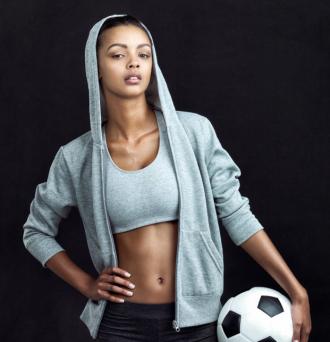 The hoods, zip-front seams, windproof jackets, pouch pockets, Velcro, and magnetic fastenings of activewear have become part of the everyday fashion vocabulary, along with drawstrings fitted at the neck, sleeve, and waist to make zippers and buttons redundant. Maharishi popularized these tailoring details on the catwalk as the 1990s drew to a close, updating them with elements of occupational uniforms to create a signature militaristic style. The rise of activewear's popularity throughout the 1990s indicated that the traditional compartmentalized wardrobe no longer sustained shifting social and cultural needs. As the style formed an essential part of the modern wardrobe, it encouraged the movement of materials and technologies across disciplines, moving high-tech fabrics into the collections of forward-thinking fashion designers. Activewear's multifunctional, dynamic features seemed to herald the dawn of twenty-first century fashion in garments that fused fashion with high-performance sportswear.

Labels such as CP Company, Mandarina Duck, Issey Miyake, Vexed Generation, and Final Home were among the first to use advanced textile technology to create an edgy, urban aesthetic in designs as durable as they were chic. CP Company led the pack with designs that transcended fashion altogether; their overcoats transformed into one-person tents or inflated into air mattresses, and their parkas puffed up into armchairs. The garments are transformed by the wearers themselves, introducing a notion of technical skill required beyond the point of purchase. Likewise, the "Jackpack," designed by Mandarina Duck in Italy, integrated a backpack's straps, fastenings, and compartments within the fabric of the jacket's back panel. By taking the jacket off, turning it inside out, and folding the sleeves, lapels, and fabric panels into an internal pouch, the structure of the garment was completely transformed. The pouch contains other zippered compartments for stowing away shopping or other items of clothing. Issey Miyake, for his "Transformer" series, also designed cotton jackets that concealed a nylon raincoat within.

The British fashion duo Vexed Generation countered the problems of modern life with clothing crafted from bullet-proof and slash-proof materials. Their designs combined high-performance fabrics with cutting-edge street style in garments incorporating many of the functions associated with protective clothing. Temperature-regulating materials manufactured for sportswear were incorporated into their winter coats, ending the need for bulky layering. By lining jackets and overcoats with phase-change materials such as Outlast, Vexed Generation created outer garments that could function as personal thermostats. Tiny paraffin capsules in the phase-change fabrics expand when body temperature climbs, absorbing the heat. Once body temperature drops below 98.6° F (37° C), they contract, releasing the heat they have stored. By maintaining a mean temperature within changing climatic environments, Vexed Generation created a comfort zone for the wearer.

The Japanese designer Kosuke Tsumura's signature garment, the Final Home jacket, expands the mobility of activewear into an expression of architecture as he claims that clothing constitutes the ultimate shelter. The multi-functional, transparent jacket is a nylon sheath equipped with forty-four zippered pockets that can be lined with warm materials for extra insulation, or cushion the wearer when sitting or reclining. Tsumura sees the jacket as a protective shell that enables the wearer to withstand harsh weather conditions. Along with personal items and accessories, Tsumura suggests that some of the pockets be filled with survival rations and practical supplies, eliminating the need for backpacks, shopping bags, luggage, and even tool kits.

As fashion consumers continue looking to activewear to reconcile the demands of the modern lifestyle, the boundaries between street clothes, office attire, and sportswear are blurring even further. High-performance designs and technologically advanced textiles are common to all three, as comfort, flexibility, and protection become central to all parts of the modern wardrobe. As the garments are updated with innovations that transcend conventional clothing, activewear is proving to be one of the fastest moving areas of fashion in the early 2000s. New tailoring techniques radically streamline the designs each season, and future styles of activewear portend such sophistication that the gym is probably the last place one can expect to see them.