Vietnam's national dress, the ao dai (literally "long shirt"; pronounced "ow zai" in the north, "ow yai" in the south) consists of two elements: a long tunic with a close-fitting bodice, mandarin collar, raglan sleeves, and side slits that create front and back panels from the waist down; and wide-legged pants, often cut on the bias. While in the past both men and women wore ao dai, in the twenty-first century it is almost exclusively a women's garment. A popular uniform for civil servants, tour guides, hotel and restaurant staff, and high school students, the ao dai is also worn for weddings, religious rituals, and special occasions. Commonly seen as symbolizing traditional Vietnamese identity and femininity, the ao dai in fact has a relatively brief history marked by foreign influence.

The ao dai provides a striking example of how Vietnamese have responded to both Chinese and French colonization by adopting elements of foreign cultures and modifying them to be uniquely Vietnamese. Prior to the fifteenth century, Vietnamese women typically wore a skirt (vay) and halter top (yem). These were sometimes covered by an open-necked tunic (ao tu than) with four long panels, the front two tied or belted at the waist. Women's garments were brown or black, accented by brightly colored tops or belts on special occasions. From 1407 to 1428, China's Ming Dynasty occupied Vietnam and forced women to wear Chinese-style pants. After regaining independence, Vietnam's Le Dynasty (1428- 1788) likewise criticized women's clothing for violating Confucian standards of decorum. These policies were haphazardly enforced, and skirts and halter tops remained the norm. During the seventeenth and eighteenth centuries, Vietnam was divided into two regions, with the Nguyen family ruling the south. To distinguish their subjects from northerners, Nguyen lords ordered southern men and women to wear Chinese-style trousers and long, front-buttoning tunics. After the Nguyen family gained control over the entire country in 1802, the conservative Confucian Emperor Minh Mang (r. 1820-1841) banned women's skirts (vay) on aesthetic and moral grounds.

Over the next century, precursors to the modern ao dai became popular in cities, at the royal court in Hue, and for holidays and festivals in the countryside. With some regional variations, the outfit consisted of pants and a loose-fitting shirt with a stand-up collar and a diagonal closure that ran along the right side from the neck to the armpit, both features inspired by Chinese and Manchu garments. Elites often layered several ao dai of different colors, with the neck left open to display the layers. Among peasants and laborers, however, the vay and yem remained popular for daily wear.

French colonialism ended in 1954 with the division of Vietnam into North and South. In North Vietnam, communist leaders criticized the ao dai as bourgeois, colonial, and impractical for manual labor, although women continued to wear it for special occasions. Meanwhile, in capitalist South Vietnam, experimentation with the garment continued. Madame Nhu (Tran Le Xuan), the sister-in-law of President Ngo Dinh Diem, became notorious in the 1950s and 1960s for the skin-baring open necklines of her ao dai. Also at this time, two Saigon tailors redesigned the ao dai to include raglan sleeves, thus reducing wrinkling around the shoulders and armpits.

Revival of the Ao Dai 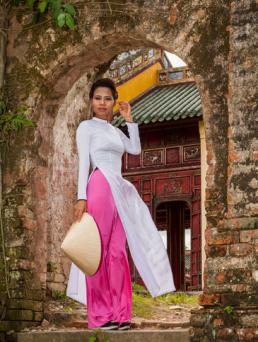 In 1975, the Vietnam War ended with the reunification of North and South under communist rule. Leaders decried the southern ao dai as decadent and instead promoted simpler, utilitarian clothing styles. But austerity proved short-lived. By the 1990s, economic reforms and improved standards of living led to a revival of the ao dai within Vietnam and to growing international awareness of it as a symbol of Vietnamese identity. In 1989, the Women's Newspaper in Ho Chi Minh City (formerly Saigon) hosted the first Miss Ao Dai contest. Six years later, Miss Vietnam's blue brocade ao dai won the prize for best national costume at Tokyo's Miss International Pageant. Simple white ao dai have been reinstated in many cities and towns as uniforms for female high school students, while Vietnam Airlines flight attendants don red ao dai. Recent innovation has come in both decoration and form. The designers Si Hoang and Minh Hanh employ novel fabrics, abstract motifs, and ethnic minority patterns, while others alter the tunic by opening necklines, removing sleeves, or replacing the long panels with fringe. The once scandalous white pants now seem outmoded, and urban women instead favor pants the same color as the tunic. Although most Vietnamese women wear Western dress daily, the ao dai allows the fashion-conscious to be simultaneously trendy and traditional on special occasions.

When the ao dai fell into disfavor in socialist Vietnam, Vietnamese who had immigrated to the United States, Canada, Australia, or France preserved it as a symbol of their ethnic heritage. Ao dai can be seen at fashion shows, Tet (Lunar New Year) celebrations, weddings, and musical performances throughout the diaspora, which numbered approximately 2.5 million in 2003. Like the Chinese cheongsam and the Japanese kimono, the ao dai has also inspired non-Asian designers. Following the 1992 films Indochine and The Lover, both set in the French colonial period, Ralph Lauren, Richard Tyler, Claude Montana, and Giorgio Armani debuted ao dai-inspired collections. While "Indo-Chic" fashions can be Orientalist in their celebration of a demure, sexy, and exotic Vietnamese femininity, they are typically welcomed in Vietnam as evidence that the ao dai has entered the canon of international fashion. The ao dai's twenty-first-century revival in Vietnam rests as much on this newly fashionable status as on its links to the past. 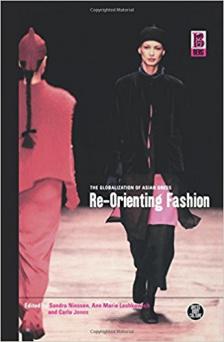