The bicycle was invented in Europe, but American ingenuity increased its usability and widespread use. Kirkpatrick Macmillan of Scotland is credited with inventing the first mechanical bicycle, while Pierre Michaux and son Ernest of Paris were the first to manufacture bicycles on a large scale in the mid-1860s. The aptly named "boneshaker" or velocipede was quickly followed by the high-wheeler and then the safety bicycle. In July 1865 Pierre Lallement brought the bicycle to America resulting in a wave of bicycle-related patents. The bicycle craze flourished through the end of the century. Clothing specifically designed for wear while bicycling has changed dramatically over the years.

Early bicycle riding was a man's activity due to the fact that in order to ride the velocipede, essentially two wheels connected by a frame and suspended seat, the rider had to wear bifurcated apparel to straddle the mechanism. With the introduction of the pneumatic tire in 1888, the popularity of the bicycle for transportation and leisure increased dramatically. In the same year the drop-frame bike was introduced in America. This new model made bicycle riding in a skirt much easier and more women participated in the activity. By the 1890s, clothing developed specifically for bicycling was being designed and produced. Racing clubs for men were formed and appropriate attire was required. Typical clothing included the "wheelman" or sleeveless vest with insignia worn over a shirt, long shorts (to the knee), and shoes without socks. In 1874 Charles Bennet, an avid bicyclist, decided to tackle "the delicate problem that men faced as they were jounced on their penny farthings" (Norcliffe, p. 128). He designed the "bike web," a knit and elastic garment to provide support and cushioning. Because the garment was worn by bicycle "jockeys" it was called the "jockey strap," soon shortened to "jock strap." Headgear and footwear were also designed specifically for bicyclists. Headgear varied from a small flat crown hat with visor brim to a pith helmet that might provide protection in a crash. Shoes were designed to prevent slipping on the bike pedals. One shoe model incorporated leather pleats on the sole that served this function.

Mid-Victorian society did not approve of women riding bicycles, but the activity became more accepted after 1881 when Queen Victoria ordered tricycles for her daughters. Besides the immodesty and physicality of women straddling a bicycle, the independence allowed the individual woman was unprecedented. By the late 1800s, women were becoming enthusiastic bicyclists. Soon many adventurous women started wearing shorter skirts to avoid catching them in the pedals. Barbara Schreier (1989, p. 112) declared "bicycling helped to smooth the way for future clothing changes and dramatically advanced the position of women in sports." Knickerbockers made bicycle riding even easier for women, but the style was ridiculed as being unfeminine and unattractive. More shocking was the association of bifurcated garments and immorality. P. Russell suggests, "the forked body astride a modern machine could be represented as an essentially sexual image" (p. 66).

By the 1920s, new trends in sportswear introduced new forms and fabrics that permeated all sports activities. The new casual lifestyle eliminated the need for specific bicycle wear. Practical, comfortable sportswear was now fashionable and accepted. From the 1920s to the 1960s bicyclists wore all varieties of readily available sportswear with the exception of professional bike racers who wore close-fitting knit tops and pants to facilitate speed. 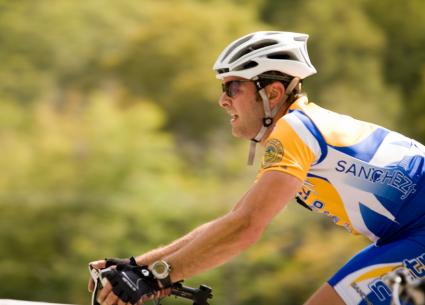 Bicycle clothing in the early 2000s combines elements of function, fashion, and advertising. Function centers on the most aerodynamic ensemble while providing comfort for the rider. Fashion is evident in color choices while professional and leisure riders sport clothing with company names and logos. The avid bicyclist wears form-fitting shorts and jerseys with appropriate accessories. Bicycle shorts rely on properties of nylon and spandex fibers to provide the closest fit possible. A major functional feature of bicycle shorts is the pad sewn into the crotch of the shorts, providing cushioning between body and bike seat. Chamois leather was originally used for the pad, but synthetic chamois or gel inserts are used in the twenty-first century. The bicycle shirt or jersey is also body-conforming for the all-important aerodynamic form. Shirts are typically brightly colored making the rider highly visible. The well-known yellow jersey worn by the leader in the Tour de France bicycle race was introduced in 1919. The Tour de France uses other signifier color jerseys including the green "points" jersey for the race's most consistent sprinter or points winner, the red polkadot jersey for the most consistent climber, and the reintroduced white jersey distinguishes the best young rider.

Bicycle helmets, when properly worn, prevent head injuries and are becoming more accepted as the "look" for riders. Indeed, bicycle helmets are required wear for child bicyclists in some states. Helmets vary in cost and design, but most have an aero Cycling shoes are designed with a rigid sole to efficiently transfer energy from the downward push of the leg to the ball of the foot and so to the pedal. Shoes worn by professional racers can be almost impossible to walk in as the sole of the shoe is contoured to mesh with the pedal of the bicycle. Gloves and eyewear often provide the finishing touch to the cyclist's look. Gloves facilitate grip on the handlebars and may prevent injury in a fall. Eyewear provides protection from sun, wind, and insects.

Since the introduction of the bicycle to the general public, bicycle clothing has influenced everyday fashion. Bifurcated garments for bicycle wear in the late 1800s assisted in liberating women from cumbersome full-length skirts. The body-conforming look provided by modern materials, especially nylon and spandex knits, is evident in bicycle wear and fashion forms worn in the twenty-first century.