The man's business suit is an emblem of official power and professional identity, suggesting a life free from physical toil. The three-piece suit, allowing for differences of cut and fabric, has been the basis of the male wardrobe since the last quarter of the seventeenth century. King Charles II, on the restoration of the British throne in 1660, set the style for a new way of dressing. He appeared in a knee-length coat, vest (waistcoat), and breeches. As diarist Samuel Pepys recorded, "Oct 15th 1666. This day the king begins to put on his vest. It being a long cassock close to the body, of black cloth, and pinked with white silk under it, and a coat over it" (p. 324).

The loosely cut knee-length coat, embellished with elaborately worked buttonholes and deep turned-back cuffs, and embroidered waistcoat remained the staple of the British court style until the mid-1720s. As the British nobility spent much of their time on their country estates, the boundaries between the clothing of the landed gentry and the middle classes became eroded. Clothes that had originally been made for riding became upgraded into acceptable day wear and even for more formal occasions.

The influence of sporting dress increased an appreciation of the solid virtues of fit and finish. Throughout the eighteenth century, the comfortable and practical coat, waistcoat, and breeches, made mostly of wool, underwent little alteration. Abstaining from overt display was a requirement of the prevailing nonconformist religion, and together with the need for equestrian practicality this resulted in a movement away from baroque splendor to greater simplicity. By the 1780s this style of dress was correct for all but the most formal of occasions and obligatory court appearances. During the next twenty years, the coat became more streamlined and the turned-back cuffs, full coat-skirts, and pocket flaps began to be refined, with the waistcoat cut straight across the waistline. Legs were clad in knitted pantaloons, to provide a long, lean line in keeping with the desire to ape the natural masculine ideal of classical revivalism that was a significant aspect of dress at the beginning of the nineteenth century. This look was exemplified by George Bryan "Beau" Brummell, born in 1778, who established himself as a paradigm of sartorial exactness and simplicity. A close friend of the Prince of Wales, who became Regent in 1811 and later George IV, Brummell created a vogue for bespoke tailoring. He took his patronage to the Burlington estate where fashionable tailors had begun to congregate in the late eighteenth century.

By 1806 the first tailor was established in Savile Row. By 1810 tailoring techniques were capable of producing an unembellished coat of exquisite fit with emphasis on sculptural seaming and construction. The coat now had a collar that curved around the neck and formed flat lying lapels across the chest, the most distinctive element of the modern-day suit. The perfect fit was also due to the use of woolen cloth, which is both pliable and responsive to steam pressing, unlike the taut weave of silk. Wool was also easily available, a staple cloth of England's sheep farmers. Ready-made clothes were available from the 1820s, and with the development of the railroads and the opening of department stores they came to dominate the market, though bespoke tailoring remained standard wear for the middle and upper classes. Secondhand merchants provided clothes for the poor, and hawkers redistributed redyed patched clothing at markets.

In 1815 trousers, very often looped under the foot, replaced pantaloons and were worn with the frock coat, which owed its origins to the military greatcoat. First appearing in 1816, it was the most usual coat for daywear, typifying middle-class respectability as it was worn by the professions and by businessmen. Buttoned from neck to knee it was decorated across the chest with frogging. By 1850 the morning coat was preferred. Based on the riding coat, (riding was a popular morning activity) it began to be worn on formal occasions, replacing the frock coat, and by 1900 it was the established norm for business and professional activities. 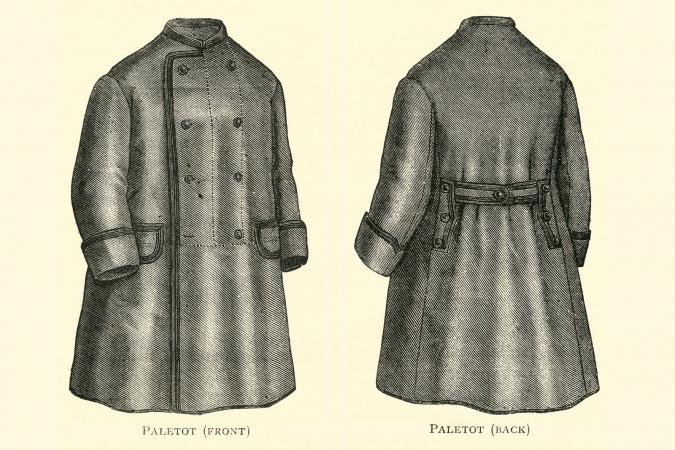 The nineteenth century saw an increasing division between the public and private roles for men and women. The psychologist J. C. Flügel identified the early nineteenth century as era of "The Great Masculine Renunciation," when men became more concerned with propriety than with the pleasures of adornment. This supposition that men gave up their right to a choice of elaborate clothing, leaving the pleasures of ornamentation only to women, can be countered by the many different masculine styles that developed at that time. For example, the Paletot was introduced in the 1830s. This was a jacket, cut loose and without a waist seam; it came to denote a certain bohemianism. Refined by the 1850s into the lounge jacket, and worn with matching waistcoat and trousers, it became the lounge suit and was initially worn after lunch and only in private, never on formal occasions or in the city. However, city workers were wearing ready-to-wear versions in darker colors, and by 1920 it assumed respectability and was subsequently worn for all business events. It became the all-purpose male costume of the twentieth century.

Advances in technology made possible the production of men's suits in large quantities, standard sizes, and a wide range of price points, thus helping to ensure the suit's continuing popularity over a long span of time. During the middle decades of the twentieth century, suiting materials became lighter in weight, reflecting the widespread use of central heating in homes and workplaces.

After World War II, men's wear became more casual and youthful in appearance; in America, the collegiate "Ivy League Look" became dominant. Also influential was the Italian streamlined silhouette developed by tailors in Rome and Milan. Italian and American suits influenced British tailoring in the 1950s and 1960s, just as London was becoming the center of youth fashion. John Stephen opened the first of his men's wear shops in Carnaby Street, purveying styles that were colorful, cheap, and fun. The clothes presaged the look of the hippie era in the use of richly textured and colored materials and exploitation of historical revivalism. The response of traditional male outfitters was to attempt to offer suits with some of the eccentricities of Carnaby Street but allied to something suitable for business wear. In 1965 men's outfitter Austin Reed filled the gap between Carnaby Street and traditional tailoring, providing contemporary suits for the young executive. Male-orientated publishing ventures such as Man About Town, which was first published in 1961, (subsequently called About Town and then simply Town) placed shopping for fashion firmly in the context of a leisure activity. The bespoke end of the market was not immune to change. Tommy Nutter, defined by the style press as a "designer tailor," took over premises on Savile Row and combined traditional qualities of craftsmanship with excessive detailing.

The 1970s and 1980s saw the rise of Italian luxury ready-to-wear. Giorgio Armani, in particular, became known for his unstructured suits, which combined ease and elegance, thus linking the freedom of the 1960s with the drive for financial success that typified much of 1980s culture. The revival of the suit heralded a new seriousness about being successful, epitomized by the aspirational "yuppie." The burgeoning style press and the advertising industry emphasized the importance of a lifestyle that included not only clothes but also iconic accessories such as the Rolex watch and the Mont Blanc fountain pen. The newly important role of the merchandiser, rather than the buyer or designer, under-pinned the emphasis on lifestyle marketing. Men's shops took on the appearance of a gentleman's club. Retailers such as Ralph Lauren and Paul Smith sold the "English look" amidst the accoutrements of an Edwardian gentlemen's club such as sofas, leather-bound books, and sports paraphernalia, all evoking an era of leisured gentility. 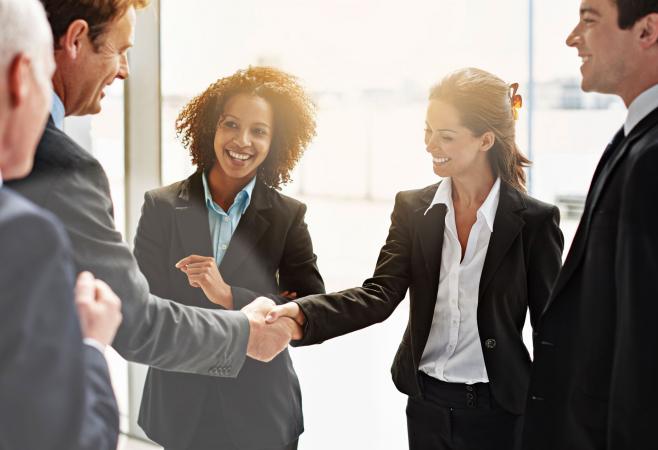 When women entered the marketplace in substantial numbers in the 1980s, they began to adopt elements of male dress, wearing an approximation of the male suit. As they achieved more confidence they exaggerated the tailored qualities of the suit with ever widening shoulders and flying lapels, subverting its formality with short skirts and stiletto heels, a look known as "power dressing."

An Icon of Authority

Despite a long-term trend toward more casual dressing, the suit remains an icon of authority. However its details might vary, it remains fundamentally the same. The business suit implicitly evokes the virtues of assertiveness with self-control, diffidence in success, and just enough socially acceptable narcissism to be attractive.