Diplomatic uniforms are civilian uniforms worn by ambassadorial and consular officers at public occasions. These uniforms appeared around 1800 when European countries began to reform their administrations and assign uniforms to many of their public officials. Previously, diplomats, who usually belonged to the highest nobility, had worn their own splendid clothes at solemn occasions. Only the colors and badges of their livery servants' clothing indicated the ambassador's own court and the court of the ruler he represented (Nach Rang und Stand, pp. 85-93, 252-255).

In the second half of the eighteenth century, several European countries began to consider uniforms for their envoys to foreign countries. As early as 1768, France ordered that her consuls in charge of trade and shipping traffic in the Near East wear uniforms of the navy's commissioners and under-commissioners. By 1781, the French consuls received their own uniforms of blue cloth with red lining, red waistcoat, and breeches, decorated with buttons featuring the king's coat of arms and trimmed with gold braids denoting respective rank. One of the reasons for the introduction of diplomatic uniforms can be found in a letter sent by Netherlands consuls in Spain to their home country in 1776. They asked for uniforms in order to save money and claimed that uniforms would relieve them from buying expensive fashionable clothes needed for representing their country (Kramers, p. 23).

For patriotic reasons and in order to promote abroad the ideas of a national republican state, the First French Republic required that its representatives at foreign courts dress in the uniform of the French Garde Nationale. However, these early regulations were obviously not yet strictly followed, as an official portrait of Guillemardet, the French ambassador in Spain at that time, shows him wearing his private clothes together with a tricolor sash wound around his waist (Delpierre, p. 31).

Diplomatic uniforms became part of general administrative reforms issued by most European countries around 1800 as a response to the French Revolution and the Napoleonic wars. When in the past the ambassador's impressive appearance depended on his personality and his own individual means, now uniforms made the person stand back behind the office he represented (Lüttenberg, p. 86-87). In several countries, diplomatic uniforms were among the first civilian uniforms to be issued because they represented the new reformed state to the outside world. When Count Maximilian von Mont-gelas, minister and head of the new reforms in Bavaria, ordered uniforms for the Bavarian state officers in 1799, he began his campaign with the office of foreign affairs. His regulations, published in 1807, were basically kept until as late as 1918. In fact, in most European countries, the design of the diplomatic uniforms changed very little in contrast to other civilian uniforms.

The design of the diplomatic uniforms preserved the court fashion of the early nineteenth century, which was marked by richly embroidered tailcoats with standing collar, breeches or pantaloons depending on the formal event, and completed by a sword and a two-cornered plumed hat. With their lavish gold embroidery, the diplomatic uniforms were always among the richest of civil uniforms and resembled those of distinguished court officials. This was considered appropriate because members of the diplomatic corps usually belonged to the highest court circles and represented their country at the most official events at court. While most Bavarian state employees were clad in blue uniforms, Barvarian diplomats dressed in red ones similar to the uniforms worn by high officials of the Bavarian royal court. In most countries, diplomats had to acquire at least two uniforms: a richly embroidered full dress uniform for formal events and a simpler uniform for everyday use. English and Bavarian diplomats needed three kinds of uniforms: full dress, levée dress, and frock dress. 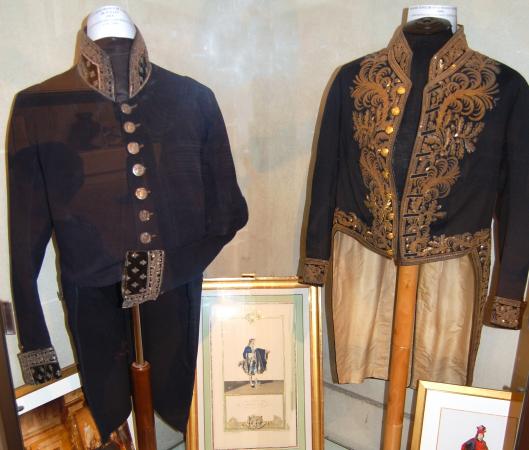 While military uniforms signal rank mainly by stars and badges, civilian uniforms distinguish rank by the amount and quality of the embroidery. By 1847, the Lord Chamberlain's office divided the British diplomatic corps into five ranks and laid down rules for their respective uniforms precisely specifying the amount and width of the gold embroidery allowed for each rank. Ambassadors, who belonged to the first class, enjoyed the privilege of wearing the richest full dress uniform at grand state occasions. Sparkling gold embroidery of oak and palm leafs covered large areas of the tailcoat's chest, collar, cuffs, pocket flaps, and back skirts, as well as the seams. Gilt buttons showing the royal arms buttoned down the chest. White breeches, a sword, sword knot and belt, gloves, and a two-cornered hat with white ostrich feathers completed the full dress uniform. For less grand occasions, the English ambassadors donned the so-called levée dress uniform. Being less opulent its gold embroidery was restricted to the collar, cuffs, pocket flaps, and between the buttons on the rear waist. Long trousers belonged to the levée dress because they were considered less formal than short breeches. The embroidery on the full dress and levée dress uniform diminished in amount and width as the rank descended. (At informal dinners and evening parties, all members of the English diplomatic corps wore plain black frockcoat). Signaling a lower status within the foreign services, the uniforms of the English consular staff were decorated with embroidery of silver instead of gold (Tendrell, 35-42).

Most European diplomatic uniforms were quite similar in shape but varied in color, design of embroidery, and of course in the design of the buttons showing the coat of arms or initials of the ambassador's ruler. Austrian diplomats dressed in dark green tail coats with cuffs and collars of black velvet covered with gold oak leaf embroidery. After 1817, Prussian diplomats wore dark blue tail coats with cuffs and a standing collar of black velvet, decorated with gold embroidery showing neoclassical oak leaf scrolls. Whereas during the course of the nineteenth century most uniforms of governmental officials became modernized along with the military uniforms, the ornate diplomatic uniforms tended to keep their traditional shape. In 1888, when the German government revived the altbrandenburgische waffenrock as the full state uniform to be used by most governmental officers of upper rank, the diplomats were at first excluded. Only later, after having launched several requests, did the German diplomats receive permission to wear the richly embroidered long coat, which revived elements of uniforms worn by Prussian military officers during the eighteenth century (Lüttenberg, p. 90). 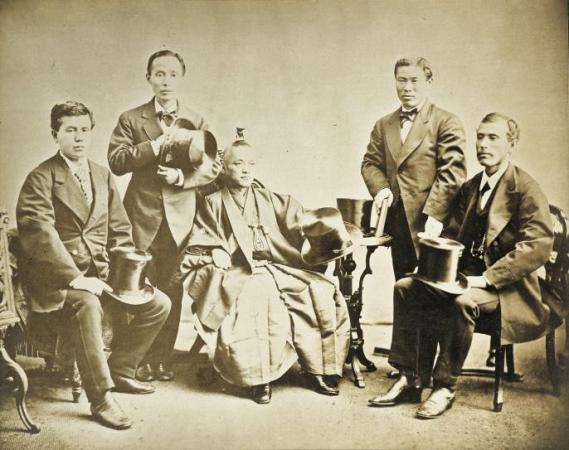 Although the majority of the European countries gave up uniforms for most of their governmental officers at the end of World War I, several countries decided to keep diplomatic uniforms. Germany, for example, had already abandoned its richly embroidered diplomatic uniforms during the Weimar Republic, although the Nazis' fondness of impressive uniforms brought back the diplomatic uniform for a short while. The stage designer Benno von Arent recreated a new diplomatic uniform with the help of Mrs. von Ribbentrop, wife of the German foreign minister. Its full dress uniform consisted of a dark blue tail-coat with silver oak leaf embroidery covering the coat's modern lapels. A silver sash, silver aiguillette, and a small dagger completed the startling uniform. Even by the twenty-first century, some European ambassadors still appeared in full dress uniforms at special occasions. A photo taken of the New Year's reception at the Vatican in 2001 shows from left to right the ambassadors of Monaco, the Netherlands, Thailand, Great Britain, Spain, France, and Belgium, all clad in splendid diplomatic uniforms.

The embroidered full dress uniform of European diplomats impressed several non-European courts. Formal portrait photos taken during the nineteenth century depict Indonesian princes wearing jackets richly embroidered with gold thread in the style of Western diplomatic state uniforms together with multicolored native sarongs and pajamas. A most striking adaptation of Western state uniforms took place in Japan in 1872, when two centuries of isolation had come to an end and the Japanese emperor Meiji decided that all members of his military, court, and government (including the diplomatic corps), abandon traditional Japanese dress and adopt European uniforms. Quite in contrast to monarchic countries, the republican United States renounced civil uniforms for its diplomats, and their use was even prohibited by Congress. Of Civil War veterans only those of the Northern states were allowed to wear their military uniforms. Consequently, during the nineteenth century, American diplomats frequently ran into trouble when trying to attend formal events at European courts, which would only admit men in uniform. Thus, Theodore Roosevelt attracted considerable attention when he attended the funeral of the English king Edward VII in 1910 and was the only foreign representative who did not appear in uniform.

Trendell, Herbert A. P. Dress Worn at his Majesty's Court. Issued with the authority of the Lord Chamberlain. London, 1908. pp. 35-42.