Simply put, evening dress is the prevailing style prescribed by fashion to be worn in the evening. Though straightforward in its basic definition, there are surprisingly complex expectations related to appropriateness of fashionable dress for evening. Regardless of the era, evening dress is intricately connected to fashions of the day, with specific characteristics that distinguishes it from everyday dress. An evening gown is a special form of dress that amplifies a woman's femininity and often proclaims her desirability. In general, necklines are low, bodices are tightly fitted, arms are bared, and skirts are extravagantly designed. Fabric surfaces vary from reflective to matte, textured to smooth, and soft to rigid. Gowns may be bouffant or hug the body, emphasizing every curve and swell. Regardless of these distinctions, there tends to be an overall emphasis on the woman's body and in many instances on the gown itself. Through the decades, undergarments have played a critical role in reshaping the body into the desired silhouette, from corsets and petticoats of the nineteenth century to control-top panty hose and padded Wonderbras of the twenty-first century.

Although formal court dress has existed for centuries, there is consensus among dress historians that evening dress materialized as a discrete category in the mid-1820s. It is probably not coincidental that this form of dress emerged at roughly the same time the Romantic Movement in art and literature surfaced as an influence in European and American cultures. Romantics accentuated passion and sentiment, placing a greater emphasis on love rather than on duty. Other cultural factors such as increased fabric production, a thriving textile industry, and an expanding ready-made clothing industry resulted in greater access to resources. By the 1820s, fashion had been fairly democratized. Additionally, Parisian and American fashion magazines experienced a burgeoning popularity among women in the United States and Europe. Dresses of the 1820s were frequently identified in Godey's Lady's Book and Peterson's Magazine according to explicit activities or time of day. Women viewed fashion plates with captions like morning dress, day dress, walking dress, promenade dress, carriage dress, seaside dress, dinner dress, evening dress, or ball dress. From these labels, it seems the evening dress was born. 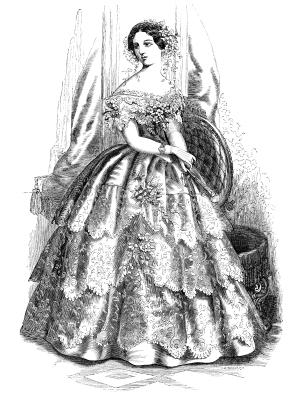 During the last eighty years of the nineteenth century, women's fashions evolved from an X-shaped silhouette (1820s) to the introduction of the cage crinoline (1850) through the bustle period (1870-1890) and ended with an hourglass silhouette (1890s), and in each era evening dress took its profile from current styles of the day. However, evening dress was discernible by its use of opulent and supple gauze and satin fabrics, the cut of the neckline- typically low or off-the-shoulder-short sleeves, and by the lavishness of surface embellishment. Skirts were especially complex in ornamentation-with layers of swags and puffs and such trim details as artificial flowers, ribbons, rosettes, and lace. During the bustle period and the 1890s, trains were frequently attached to full-length skirts.

The early years of the twentieth century included a progression in women's fashions from an S-shaped silhouette to a revival of Empire styles to the flapper style of the 1920s to the bias-cut fashions of the 1930s. With the exception of the latter part of this time-period, evening dress followed the conventions of daytime dress. Necklines tended to be deep and wide, sleeves were short or were mere straps on the shoulder, skirt lengths varied according to fashions and frequently involved complex floating panels, draping, or layers. Fabrics were extravagantly pliant chiffons and satins and luxuriant velvets and taffetas. Pleating, embroidery, lace, beading, fringe, braid, and ruffles decorated the surfaces.

During the 1930s, evening dress made an uncharacteristic split from daytime styles, remaining floor-length while daywear fluctuated in length from mid-calf to ankle. Evening gowns were designed in bias-cut styles and were usually constructed with an open back, with fabric skimming the body to the hips and flaring out and to the floor.

The late 1940s through the early 1960s saw the last of a singular identifiable fashion for evening. Dior's New Look-with a rounded shoulder line, a nipped waist, and either an exceptionally full skirt or a pencil-slim skirt- defined the style of the day. Evening dress generally paired strapless bodices with full rather than narrow skirts and it was not unusual for skirts to be floor-length.

By the 1960s, a plethora of options in evening wear emerged. Mini-skirted straight dresses were made from metallic fabrics or brilliantly patterned fabrics, and surfaces may have been trimmed with sequins, beads, or plastic bits. By the late 1960s, evening dresses had returned to floor length. Pantsuits with full-legged trousers and palazzo pants paired with a coordinating top also became viable options. In the mid-1970s, fashionable evening dress was typically long and made from fabrics that were soft, clinging, and often knitted. In the 1980s, the glamour of evening dress contrasted with professional dress for career women and integrated bright and vibrant colors with plenty of glitter, embroidery, sequins, and beading. Lacroix introduced a gown with a short wide puffy skirt, nicknamed Le Pouf, which was eagerly copied and made available to the masses. Wide-skirted, short styles called mini-crinolines were also popular. By the late 1980s, evening dresses made from elasticized fabrics hugged the body were short, and were strapless or had tiny shoulder straps. In the early 1990s, basic slip dresses made from soft crepe fabrics became popular. By the mid-1990s, full-skirted, short, strapless evening gowns reemerged.

Also fashionable were lace or elaborately decorated bustiers and fitted evening gowns and black was the color of choice.

Contemporary Use of Evening Dress

Today, evening dress is limited to such formal or semi-formal events as balls, high school proms, gala fundraisers, pageants, and awards ceremonies. While men's dress tends to be quite typical (usually a standard dark-colored suit or tuxedo), women's gowns vary drastically from demure black garments to revealing objets d'art, as might be seen on celebrities at the Academy Awards. Despite the range of possibilities for contemporary evening dress for women, a gown will undoubtedly include a lowcut neckline, a constricting bodice, bared arms, and lavish skirts. Evening dress draws attention to a woman's body and serves to define her gender, establishing her as an object to be gazed upon by her audience.