The G-string, or thong, a panty front with a half- to one-inch strip of fabric at the back that sits between the buttocks, became one of the most popular forms of female underwear in the early twenty-first century. Its sources are manifold; the thong bikini designed by Rudi Gernreich in 1974, launched with a matching Vidal Sassoon hairstyle, is one which in turn spawned the more popular Brazilian string bikini brief, or tanga, of the late 1970s. This tiny bikini-dubbed the fio denta, or dental floss-ensured that the buttocks achieved maximum exposure to the sun and openly displayed an erogenous zone that was a particular favorite in Latino culture.

The stripper's G-string is another influence and has been an important part of the striptease artist's-or, more latterly, lap dancer's-wardrobe since the 1950s, when the taboo of displaying the vagina or any degree of pubic hair was paramount. The G-string was comprised of an elastic string that went around the waist and up between the buttocks and is popularly believed to have been originally added to the stripper's accoutrements on the occasion of the 1939 World's Fair in New York when Mayor Fiorello La Guardia demanded that the city's nude dancers cover themselves as a mark of respect for the thousands of visitors thronging the city. However, these types of coverings could be described as derivations of male underwear or garments associated with sports, such as jockstraps, which tend to reveal the muscle power of the legs and buttocks. Posing pouches worn by nude models in life classes since the Renaissance and in the nineteenth and early twentieth century in magazines promoting "health culture" and featuring body builders could be seen as types of G-string in that they have a front part that covers the genitals and a string at the back that exposes the bottom.

The thong was incorporated into the vocabulary of women's underwear in the 1980s in response to tighter and tighter trousers, especially jeans worn by women to display more of their gym-honed bodies in an era that emphasized muscled body shape. Women demanded underwear that would remain invisible under outerwear and combat what became known as VPL, or Visible Panty Line. Frederick Mellinger, of popular underwear manufacturer Frederick's of Hollywood, realized the potential of this form of underwear; Frederick's began to mass-market the thong, at first known as the "scanty panty," as an erotic item alongside crotchless or edible underwear. By the mid-1980s, however, the thong began to be appreciated as a practical garment in its own right. By 2003, it had become the fastest growing segment of women's underwear, making "full-bottomed" panties almost obsolete. In order to persuade the few reluctant women left to wear the thong, a "training" garment was invented called the Rio, or "starter" thong, which rose more sedately up the sides to expose less of the buttocks. 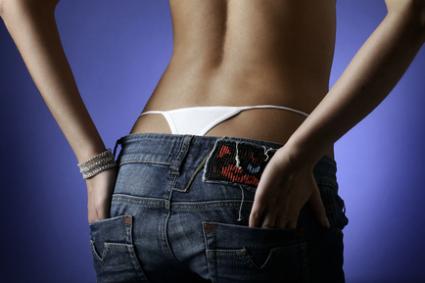 In the 1990s, the thong became a garment of folkloric proportions after the White House intern Monica Lewinsky's affair with U.S. president Bill Clinton was outlined in the Starr Report. Lewinsky admitted initiating her liaison with Clinton by flirtatiously lifting the back of her formal suit jacket to reveal the straps of her thong underwear. This indicated the irony of the thong for, in its original incarnation as underwear, it was designed to remain invisible so as to reveal the contours of a shapely bottom under the tightest of trousers. By the early 2000s, it became fashionable to wear low-cut hipster jeans that revealed the back of the thong, which became a focal point reinforced by diamanté-covered straps by such designers as Agent Provocateur and Frost French and the manufacturers Gossard. This fad, believed to be initiated by glamour model Jordan in England and singers Britney Spears and Mariah Carey in the United States, also showed a cultural shift in the sexual zoning of women's bodies. The prominent, fleshy bottom mythologized in African American culture by songs such as "The Thong Song" by American rhythm and blues star Sisqó, who exhorted, "Let me see that thong," and eulogized in the shape of actress and singer Jennifer Lopez, began to take over from the breasts as the primary erogenous zone.

The popularity of the thong spread across all ages and sexes (although the man in the thong is mainly popular in certain gay circles), and by 2003, a moral panic had ensued as parents and the media saw the thong as responsible for sexualizing girls at too young an age. According to provisional figures compiled by manufacturers' sales of thongs to tweenage girls, the marketing definition of twelve- to fourteen-year-olds, jumped 33 percent from 2002 to 2003 in the United Kingdom. In 2003, an estimated ten million thongs worth about sixty-five million pounds were sold in the United Kingdom. The British shop Tammy Girl came under particular fire for marketing thongs to pre-teenaged girls with logos such as "Cupid Rules" and "Talent" printed on them. A further attack on the thong came in 2002, when the authorities at Daytona Beach, Florida, using anti-nudity laws to dissuade the use of the thong, threatened to arrest anyone displaying more than a third of their buttocks in public.

Comments
© 2006-2021 LoveToKnow, Corp., except where otherwise noted. All Rights Reserved.
G-String and Thong