Mary Brooks Picken defined girdle as a "flexible, light-weight shaped corset, made partly or entirely of elastic. Worn to confine the figure, especially through the hip line." Merriam-Webster's Collegiate Dictionary offered: "A woman's close-fitting undergarment often boned and usu. [sic] elasticized that extends from the waist to below the hips." Neither definition does full justice to the undergarment that changed shape, materials, and functions through its six decades of prominence in women's wardrobes, from the 1910s through the 1960s. Girdles evolved continuously to take advantage of new fibers and fabric structures and to respond to each new silhouette in women's outerwear. Pantie girdles came on the scene when substantial numbers of women began to wear pants. Initially, girdles appealed to younger women and teen girls, but women of all ages eventually wore some type of girdle, before control-top panty hose supplanted the girdle's functions for all but the most conservative women.

The modern girdle's origin may be traced to the short hip-confiners worn over corsets during the early 1900s, but the term itself began to assume its contemporary meaning in the mid-1910s. Treo, an early manufacturer, applied the term girdle to its flexible Para rubber corsets without laces. Competing terms to describe girdles included the French ceinture, belt, and sash. In 1916, Stanford Mail Order Company, New York, marketed girdles to "Misses and Small Women." At the outset, girdles were associated with youth and informality, in part because their light control suited the figures and activities of a younger clientele. However, rubber "reducing girdles" were sold to weight-conscious women of all ages. 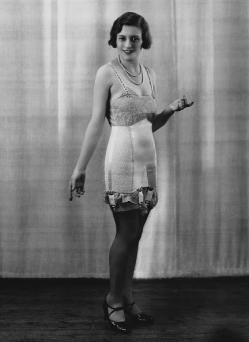 In the famously unconstrained 1920s, teens and young women, collectively termed flappers, generally abhorred the heavy corsets on which their mothers depended for figure control. Fashionable young women often rolled their stockings and limited underwear to a wispy bandeau and step-in panties. By the mid-1920s, as a contoured silhouette began gradually to return to women's fashions, flappers and other fashionables accepted garter belts and light girdles. The advertising agency J. Walter Thompson reported the views of a Manhattan department store buyer thus: "widely talked of abandon [sic] of corsets was a myth. Even flappers wear something, if it's only a garter belt or corselette." Girdles of the 1920s usually extended from natural waistline to hipline, came in white or peach-tone knit elastic, and were worn over step-ins. More conservative girdles included woven brocade panels over the tummy and derriere. Generally priced from $1 to $6 dollars, girdles appealed to the budgets of young women.

Thriving During the Depression

In the 1930s, technology and fashion converged to produce styles of girdles that sold by the millions, despite the persistence of the business depression. Unit sales of girdles topped 20.6 million in 1935 alone ("The Corset," Fortune, March 1938). Technological innovation arrived in the form of Lastex, an extruded (spun) rubber latex yarn covered by mercerized cotton. Put on the market in autumn 1931, Lastex made possible the lightweight twoway stretch girdles that gained wide appeal, especially with young customers, for their ability to move with the body. Lastex hand-washed easily and provided control without boning, though some girdles added a few bones and often had panels of woven fabric to tame front and rear bulges.

Warner made knitted Lastex girdles, whereas Kops Brothers specialized in woven two-way stretch fabrics. By the end of the 1930s, makers had devised tubular, seamless knitted girdles and knits of differential density and tension for molding different parts of the wearer's anatomy.

Fashion also contributed to the survival of girdles. Throughout the 1930s, dress silhouettes gradually became fuller in the bust, slimmer and higher in the waist, and gently curved and elongated in the hips. Compared with the changes in bust contours and bras, where aggressive uplift held sway by 1939, girdle shapes altered only subtly. Fashion's overall trimness of line meant that all but the very young and slender needed a girdle (or corselette) to wear a chic dress well.

Fashionable women's 1930s wardrobes began to include pants, primarily for active sports, gardening, and strictly informal social events. Enter the pantie girdle. Beginning about 1934, pantie girdles constituted a staple in the lines of many manufacturers. Most panties had garters, because stockings continued to be worn under pants, but a few styles featured removable garters or special leg bands to hold down the girdle when socks were worn or the woman went barelegged. Regular girdles were marketed for all purposes, from housework to evening parties, and at prices that ranged from 59 cents to $15 dollars.

Like bras, girdles sold mainly in peach (like present-day nude) or white, but by 1939 at least a couple of makers offered black girdles. "Talon slide fasteners"-zippers-appeared in slightly heavier or fancier girdles. Talon argued that roll-on girdles caused frustrating tugging matches. A girdle could be as short as eight inches-like a glorified garter belt-but most came in ten-, twelve-, fourteen- and sixteen-inch lengths, varying with both the height of the wearer and her need for control at the hip and waist.

Girdle manufacturing was widely dispersed during the 1930s, with many of the 240 corset companies ("The Corset," Fortune, March 1938) producing some type of girdle. Some stores featured private-brand girdles, but generally the industry divided between prestige-brand makers and small, marginal firms. Even the better-known companies split between those grounded in corset-making, such as Maidenform and Formfit, and those derived from knit underwear makers, including Carter, Kayser, and Munsingwear. 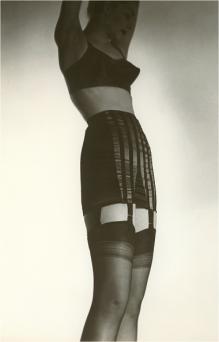 New fibers and innovative marketing might have constituted the core of the girdle story in the 1940s but for the hiatus of World War II. Nylon, introduced for hosiery in 1939, was offered in girdles in 1940; Formfit and other companies marketed all-nylon and blended-fiber girdles by that autumn. Nylon and Lastex created strong, light powernet, so effective in girdles for the junior market. Latex film Playtex all-way-stretch girdles offered another route to smooth control.

As war approached, the U.S. government took possession of strategic textiles, including nylon and latex. Regulation L90 stipulated allowable amounts of elastic in girdles and other undergarments; however, neither Lastex nor nylon wholly disappeared from girdles or bras. Small sections of elastic provided some relief from rigidity. Knitted fabrications helped too, but wartime girdles often looked and felt dowdy to young customers. Pantie girdle sales held up well, because women working in armaments factories often wore pants or coveralls, which looked better over a pantie girdle. Slim and fit girls just wore garter belts or inexpensive briefs with garters.

Late in the war, synthetic rubber neoprene appeared in girdles, but was overshadowed by the newly plentiful nylon and Lastex. With wartime seriousness forgotten, pink, blue, rose, black, and plaid girdles gladdened consumers' hearts. Embroidered touches, including custom sorority emblems from the new Olga Company, lent glamour to formerly stodgy foundations. The biggest news, however, came from the outerwear silhouette. American dress and girdle styles were moving tentatively toward fuller hips and smaller waists as early as fall 1945, but the 1947 French New Look took the trend much further, faster. Girdles rose in the waistline, swelled in the hip, and even returned to selective lacing to achieve the newly desired hourglass effect. American brands pursued a more moderate line, in order not to alienate customers-especially the all-important teenagers, who demanded comfort, easy care, and flexibility in their girdles.

Far longer-lasting than the New Look was the new marketing, presaged before the war by Playtex's packaging of its Living Girdles in tubes for self-service. Other girdle and bra makers followed suit after 1945, and the old tradition of corsetieres fitting customers began a slow decline. 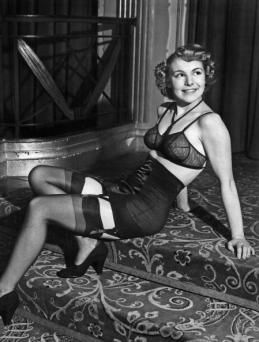 Sheath dresses, popular periodically through most of the 1950s, kept various types of girdle in adult women's wardrobes. Many girdles sported waists as much as four inches above the natural line, supported by boning, wires, and Lastex reinforcements. Snug pants, a fashion of the mid- to late 1950s, augmented the need for long-legged pantie girdles. However, as early as 1952, hints of eased fit in some dress and suit styles foretold the coming of shift dresses in the 1960s. Blousons, Empire-waisted dresses, and the ill-fated chemise of 1957-1958 offered women escape from the stifling embrace of the sheath and its confining foundations.

During the 1950s, very short girdles and pantie girdles proliferated, designed for informal wear and appealing to older teens and young adults. Some merited the nickname "postage stamp" that Jantzen applied to its 1952 style. Some makers featured girdles proportioned for tall women. Companies tried to serve varied customers, though some, including Jantzen, Olga, and Hollywood Vassarette, specialized in a young clientele.

Young or mature, women made their complaints about girdles known, because companies repeatedly trumpeted improvements in comfort. Several firms began to cut the lower front edge in a high upward curve to reduce discomfort in walking. Sarong famously brought out a crisscrossed lower front to move with the wearer's stride. Legs of panties were redesigned for ease in wearing, and both top and bottom of the rear of the girdle were engineered to prevent riding up-a major lament. Removable, even disposable, crotches remedied the panties' laundry problems.

Throughout the decade, manufacturers trumpeted their girdles' lightness, at no sacrifice of shaping power. Girdles, like their wearers, seemed to be on a diet. Nylon in Powernet and woven materials subtracted ounces. Openwork fishnet improved ventilation-crucial in selling girdles for warm-weather wear. By 1954, Dacron polyester appeared in girdles, alone and in blends with cotton. Less-clammy textured nylon came to market under the brand names of Helanca and Ban-lon. Most successful of the weight-reducing textiles, however, was Dupont's Fiber K, which in 1959 produced a two-ounce girdle! Spandex was born.

Comfort alone did not suffice; beauty was also required. Colors proliferated-from subtle almond and pale gray to vibrant red, purple, and salmon. Individual styles came in as many as eight colors by 1957. Embroidery, lace, and appliqués gratified the desire for luxury. All of this cost money. Although $2.95 could purchase a down-market girdle, typical prices ranged from $5 to $25 dollars.

Like the 1920s, the 1960s had an exaggerated image of uncorseted, braless freedom. In fact, the early 1960s produced waist-hugging dresses and tight pants that drove some women to retain their girdles. Constraint was achieved by machine-washable powernets of Fiber K, christened Lycra in 1960, and joined by rivals Vyrene and Numa in the 1960s. Every girdle company used proprietary shaping in front and side panels to tame tummies and thighs. Derrieres, however, came into fashion, and girdles that uplifted the gluteus maximus moved from racy Frederick's of Hollywood into mainstream companies in the mid-1960s.

Frantic pursuit of fashion and novelty availed little. A 1963 report showed that girdles constituted only 23.6 percent of foundation-department sales, compared with 71.8 percent for bras. Fashion reportage stressed the nude look, and played up Yves Saint Laurent's statement "underwear is dead." Despite howls from the trade press, girdles seemed to be in terminal decline. By 1970, a mere scattering of ads for panty-sized "smoothers" appeared. But fashion has taken many turns through the years, and in 2003 at least a few companies still produced nylon and spandex "body slimmers." Under such euphemisms, the girdle lives.

"How Do Your Bra and Girdle Sales Compare?" Merchants Trade Journal (September 1944): 104.