The notion that women, other than prostitutes, could use underwear to designate specific occasions as sexual was particularly popularized during the Edwardian era. Under the relatively austere "tailor-made" suit, women were prepared to wear sensual camisoles and petticoats of lace, chiffon, and crepe de chine, offsetting the accusations of "mannishness" directed by the conservative press at the New Woman, a product of the suffragette movement. Lingerie was a symptom of conflicting gender relations at the turn of the century, on the one hand, the suffragette movement promoted a sea change in sexual politics, while lingerie evoked a more traditional brand of femininity, which objectified the female body.

Underwear became deliberately branded as either male or female, feminine or masculine, determined by the use of delicate fabrics and applied decoration for women and practical wool and cotton for men. However, as the twentieth century progressed, the increase in the popularity and use of lingerie mirrored women's gradual freedom from the constraints of Victorian morality and notions of what constituted an appropriate femininity as they emerged as more sexually and socially independent beings. Lingerie was also set apart from the rationalist and unashamedly moralistic undergarments advocated by the Victorian Dr. Jaeger, who espoused the use of wool next to the skin for reasons of hygiene and health-lingerie was unashamedly erotic. However, caution was advocated at first: Lingerie should only be used by women within the confines of a happily married life. One female fashion journalist wrote in 1902, "'Lovely lingerie' does not belong only to the fast…. dainty undergarments are not necessarily [sic] a sign of depravity. The most virtuous of us are now allowed to possess pretty undergarments, without being looked upon as suspicious characters" (Steele, p. 194).

At first, handmade lingerie was a sign of social status, afforded only by the very few. Of note were those designed by English couturiere known as Lucile (Lady Duff-Gordon), who fashioned camisoles, peignoirs, and petticoats using lace, chiffon, and crepe de chine-materials that mirrored the feel of idealized flesh, deliberately appealing to the sense of touch, and evoking a new sensuality for the twentieth-century woman. Although artificial fibers such as rayon were marketed in the 1920s as a luxury fabric through the use of the name "artificial silk," their development led to a democratization of lingerie. The more body-conscious fashions of that decade also led to a new item of lingerie, the teddy, named after its inventor Theodore Baer, who combined a chemise with a short slip or attached panties. The camisole, originally derived from a decorative waist-length garment with an embroidered and pleated front and shoulder straps that were worn over the corset for warmth and modesty, became a staple garment of lingerie, eventually becoming an item of outerwear by the 1970s. Similarly the slip, a standard piece of lingerie from the 1950s and produced by the company La Perla, founded by Ada Masotti, in 1954, was used by a number of fashion designers as outerwear in the 1990s, most notably John Galliano, Dolce & Gabbana. 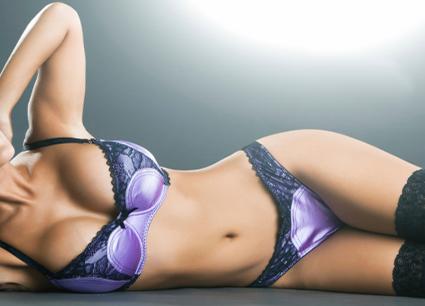 Declining Sales in the 1960s

Sales of lingerie declined in the 1960s as the new silhouette defined by the miniskirt needed a more practical combination of matching polyester bra and panties with tights to replace stockings and suspenders.

In the 1970s, however, a lingerie revival was lead by the English designer Janet Reger, whose company became one of the most renowned lingerie names of the late twentieth century. Reger was even the object of an essay by the English journalist and cultural commentator Angela Carter, who described her ranges of lingerie as "part of the 'fantasy courtesan' syndrome of the sexy exec, a syndrome reflected admirably in the pages of Cosmopolitan magazine. Working women regain the femininity they have lost behind the office desk by parading about like grande horizontale from early Colette in the privacy of their flats, even if there is nobody there to see" (Carter, p. 97). Carter was prescient in her comments, as with the rise of women entering the executive arena in the 1980s came an exponential rise in the sales of lingerie and the power suit with a lacy camisole peeping through the jacket became the staple of many a working wardrobe. In the 1990s, a lingerie revival, attracting both male and female consumers, was led by Californian companies Victoria's Secret and Frederick's of Hollywood. Victoria's Secret was estimated in 2000 to be selling six hundred items of lingerie per minute while the simple Egyptian cotton camisole made by the Swiss firm Hanro and worn by Nicole Kidman in Stanley Kubrick's film Eyes Wide Shut (1999) was a major lingerie bestseller.

The British company Agent Provocateur, founded by Joseph Corres and Serena Rees in 1994, has successfully integrated the glamour of 1950s underwear with the catwalk, recreating seminal garments like the baby-doll nightie and matching puff panties worn by Carroll Baker in the 1956 film Baby Doll. Sourcing vintage undergarments and amalgamating them with new fabrics, such as Lycra, and high-fashion design concepts, they have redefined lingerie as a luxury item with a strong appeal for a young fashion-oriented consumer. Dorothy Parker's well-known remark, "Brevity is the soul of lingerie," invokes the appeal of these most personal of undergarments.

Comments
© 2006-2021 LoveToKnow, Corp., except where otherwise noted. All Rights Reserved.
History of Lingerie