The quintessence of uniform elegance in men's wear must surely be those nearly unchanging garments described as "formal." The exact opposite of "casual" clothes, men's formal garments are as curiously elevating and ennobling as they are utilitarian and leveling. This might seem a contradiction in terms at first, but one has only to think of a "black-tie" event to realize that at least en masse, the uniform nature of the clothes-coded and easily recognizable globally-places all men in the same category, much like a uniform does for the army, navy, or air force. But like the armed forces, which have panoplies of different ranks, a tangible difference in provenance can be evinced in evening or formal clothes. Is this suit custom-made? Is that rented? Is that a hand-me-down? Is this a lucky find in a vintage market?

A black-tie event is a sea of ebony and ivory-all men, although from different ranks in society, at least visually and superficially are united by convention. Formal wear not only functions as a social leveling device for the men at a gathering, but it also provides a uniform backdrop (or perhaps, "black-drop") for the female guests who are of course, not restricted to the color black for their gowns. Formal clothes have an air of assured authority and confidence about them and are generally resistant to fashion, although of course some designers attempt to play with their strictures from collection to collection. But customers always seem to revert to the history, tradition, and timeless style of the unshakable classics. 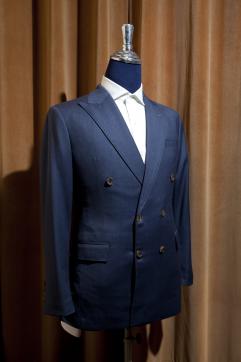 The most recognizable formal wear costume is the black-tie-in the United States, usually referred to as the tuxedo and frequently shortened to "tux." In 1896, a mischievous, iconoclastic dandy, Griswold Lorillard, wore a shorter, black formal jacket (without tails) to a country club in Tuxedo Park, New York-and the name was established. The jacket part of the black-tie ensemble is sometimes referred to as a "dinner jacket," though that appellation is too limiting to encompass all its myriad social functions. Essentially, the terms all refer to the same costume, though some contend that the classic tuxedo jacket must have a shawl collar rather than peaked lapels, and many would permit no color other than black (some will allow cream). But these distinctions have more to do with the wearer's upbringing and taste as opposed to the outfit itself.

There are generally five styles to choose from: single-breasted, double-breasted, peaked lapels (usually double-breasted) and single-or double-breasted shawl collared. Basically, it is a black suit but ennobled by a silk or grosgrain facing on the lapels, the better to provide a suggestion of luxury and attention to detail. And black-tie is, and should only ever be, black-or perhaps midnight blue, which the late royal couturier Sir Hardy Amies always maintained looked blacker than black itself, under artificial light. A corresponding black silk or grosgrain stripe runs down the sides of the trouser-again echoing uniform pants.

The shirt is always white. It can be made in anything from the finest zephyr cotton to polyester-but it must always be white. Pearl buttons or studs are the norm and a wing collar a matter of choice and taste, although if one is sported it should be buttoned on or studded through-not ready-made. And the bow tie is not considered one if it is not hand-tied. Aficionados frown upon the ready-made examples with elastic and hooks. Cummerbunds are reserved for the most formal of occasions, but they do have a small function which rescues them from being pure items of conspicuous consumption; in their pleats is concealed a tiny pocket for small essentials.

While the basic elements of formal wear are conveniently precise, the wearer is able to exert his individuality through the sporting of discreet (or not so discreet) items of jewelry-these for the most part being concealed by the jacket cuff in the form of links or by the jacket itself if a spirited watch chain or fob is attached to a waistcoat. 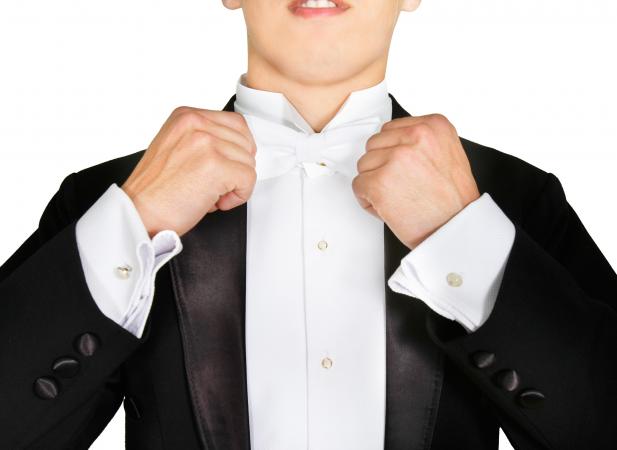 The luxe de luxe of formal wear is white-tie, an ensemble that includes tails, wing-collared shirt, hand-tied white bow tie usually in a cotton pique or fine grosgrain, and corresponding white waistcoat-traditionally three buttoned and cut low to expose maximum shirt front. For the feet, nothing but glacé, glossy pumps will suffice, topped off with a pair of silk, decorative bows. And at the other end of the body, a top hat-in glossy black silk-is the point finale. This look was established as a sartorial must by the early 1920s. Whether formal or extremely formal, the basic sonorous quality of the ensemble is the color black As the costume historian James Laver has pointed out, since the eighteenth century, all attempts to introduce color to male formal attire have failed or have been derided. A shiny, colorful, patterned male evening ensemble is unthinkable; such is the continuing power and influence of tradition.

Formal daywear is now found primarily in the world of sports, and especially of horse racing and boat racing. Royal Ascot, Goodwood, and Henley are social institutions where formal clothes are demanded and specific dress code requirements are imposed on all who attend. Formal wear for Royal Ascot would be full morning dress (dove gray or black); the groom or the bride's father at a formal daytime wedding would wear the same ensemble. The coat is sometimes referred to as a cutaway coat (being a frock coat with the corners removed), not to be confused with a tailcoat, which is cut to the waist in the front, and sports a pair of tails behind. A gray, buff, or for the more fashion conscious, brightly colored and patterned silk waistcoat, is worn beneath and teamed with a tie, cravat, or some other individualistic neck wear-but never a bow.

The origin of formal wear is open to discussion and challenge, but one name forever associated with formality, uniformity, and simplicity was Beau Brummell-king of the dandies and a one-time favorite of King George IV. He is often referred to as the "father of modern male formal costume" as he eschewed the brightly hued silken finery and powdered wigs generally worn at court for a sober suit of midnight blue-black with minimal jewelry (a signet ring was permissible), no wig, no perfume but plenty of shaving and washing-a well-scrubbed appearance being the natural partner to formal dress.

It is the Beau whom many think invented or at least popularized the under-the-foot strapped pantaloon (from the French-Pend en talon-to the heel) and set the standard for what would become the ubiquitous tailcoat. Brummell was belligerently exact when it came to matters of formal and what came to be "court dress." To a would-be dandy seeking sartorial approval he snapped, "Do you call that thing a coat?" Brummell made formality look simple-challenging the brightly colored costumes in feminine fabrics like silk and velvet for the sharp masculinity of well-cut wool and flannel. Thus formal wear showed and still does show its class by line, not content.

In the twenty-first century, the reduction of occasions on which to wear formal clothes has curiously thrown a sharper light on these style stalwarts. Not even a hundred years ago, BBC radio announcers were required to wear black-tie-the premise being that the stiff formality of the shirt, bow tie, and exact-fit jacket aided the gravitas of the voice and the assurance of the delivery. At weddings and funerals, formal clothes were obligatory and many other social situations demanded this "civilian uniform" as a means of maintaining a required ambiance, from balls and tea dances to memorials and visits to the opera. Just a hundred years ago, dressing for dinner in one's own home could have meant having to wear full formal dress-even if it was just with family members. A visit to almost any vintage clothing fair or market will reveal several yesteryear formal garments for men-a clue as to how vital they were and perhaps how few the occasions for which they are needed in the early 2000s.

In the mid-1950s, everyone who could afford to have at least one formal outfit owned one, which would most often be mothballed until needed. Those who did not own formal wear relied on borrowing from relatives or renting. The formal rental market is still hugely successful with providing formal wear for weddings to royal garden parties and theatrical opening nights. The respect that formal wear lends to the occasion is thus implied-even if not required or requested-and many will opt for formality to suggest this. Those who have chosen casual attire will be thrown into sharp contrast. Perhaps formal wear represents the last bastion of constancy in clothing with a conspiratorial nod to time, not trend.

Curtis, Bryan, and John Bridges. A Gentleman Gets Dressed Up: Knowing What to Wear, How to Wear It, and When to Wear It. New York: Rutledge Hill Press, 2003.