A plain, ankle-length garment or set of garments, the jilbab is worn by Muslim women in many different countries for reasons that include modesty, religious devotion, and political activism. Several other words, including jellabib and djellaba, refer to the same or similar styles of dress. The djellaba, a long cloak with a hood, is worn in North Africa by both men and women. In Palestine, Jordan, and Syria, the jilbab is a long over-coat that buttons down the front and is worn with a head-scarf called a khimar. In Southeast Asia and East Africa, the terms jellabib and jilbab refer to a set of simple, opaque garments that, except for the face and hands, cover the body from head to toe. This new style of Muslim dress is intended as a specific change from garments (such as a sarong or garbasaar, a traditional head and body covering) that are part of local culture. The jilbab has diffused from the Middle East in conjunction with the rise of Islamism (political Islam) following the Iranian Revolution in 1979. It is also connected with more recent efforts to counteract some of the perceived negative effects of globalization such as materialism and the corruption of secular governments.

Along with khimar (a head covering) and hijab (a more general word for something that covers), jilbab is a special term because it appears directly in the Qur'ān. Verse (33:59) briefly describes how the wives of the prophet Muhammad (and by extension, Muslim women) should be dressed: "O Prophet! Tell thy wives and thy daughters and the women of the believers to draw their cloaks [jilbab] round them [when they go abroad]. That will be better, so that they may be recognized and not annoyed" (Pickthall p. 449). This passage highlights several reasons for renewed interest in the jilbab. As more Muslims than ever have come into contact with non-Muslims or taken up residence in non-Muslim countries, many have wanted to make their status visible "so that they may be recognized." The jilbab marks a devout woman's need to pray regularly, to abstain from pork and alcohol, and to avoid compromising situations with unrelated men. For Islamist purposes, the jilbab speaks to an interest in "pure" Islam as exemplified by the prophet Muhammad. This is part of a pan-Islamic effort to find common ground between different sects and cultures in the Muslim world.

Although the Qur'ān does not specify the color, texture, or shape of the jilbab, a few basic styles have become commonplace and in the early 2000s are viewed as "authentic" dress for Muslim women. In the United States and parts of Europe, the jilbab is easily recognized as "religious dress" because it resembles the style of clothing worn by nuns before Vatican II. Some corporations, in an effort to comply with antidiscrimination laws, have adapted the jilbab as a Muslim version of their standard uniform. 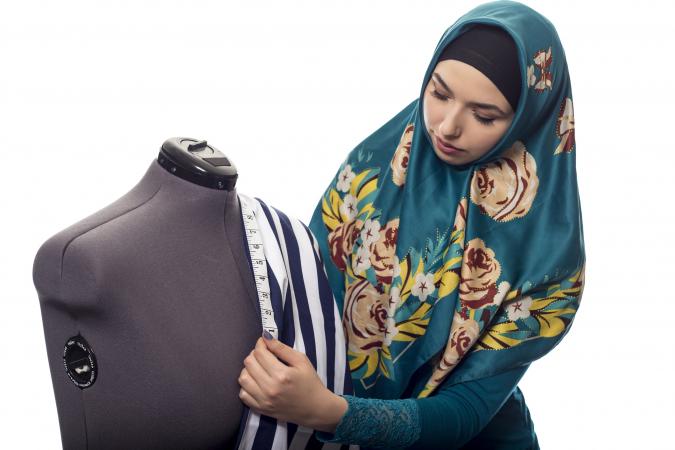 Patterns for women who want to make their own Islamic clothing are widely available in books and even on the Internet. Somali women living in the United States, Europe, and Australia frequently commission or sew their own jilbab using cloth from local fabric stores. This requires at least four yards of material. Two yards are used for a skirt and the rest for a two-piece, tailored head covering that fits closely around the neck and hairline. Older and more devout women often prefer to have a longer head covering that extends to the waistline or even mid-calf. (This requires more fabric.) As an alternative, some women wear the button-down overcoat called jilbab in Jordan and Palestine. This garment has a longer history in Somali culture and is called "shuka," a word for something that conceals the body.

In Iran, women often construct these garments from heavy black, navy blue, or gray fabrics. As Faegheh Shirazi notes in Undressing Religion, "Black, being a sign of mourning, carries a symbolic meaning in tune with the cause of the Revolution, the Iran/Iraq war and … those who lost their lives as martyrs [in the cause of establishing an Islamic state]" (p. 120). Women in other countries wear the jilbab in a variety of muted colors-white (for prayers), brown, green, and rose. Somali dress in the 1970s and 1980s was very colorful, and Somali women in the early 2000s sometimes wear the jilbab in brighter colors such as yellow, mint green, and magenta. They might also combine the plain jilbab with a few touches of more colorful printed fabrics at the hemline or on a scarf worn just underneath the tailored head covering.

The Spread of Islamism

For many women, the decision to wear the jilbab is based on their own personal beliefs and convictions. At the same time, these garments are part of a global dialogue concerning how Muslims should live in the contemporary world. The Iranian Revolution of 1979 was an early success of Islamism, a movement to create social, economic, and political change through Islam and to establish new systems of power based on Islamic law. In the 1980s, Iranian activists who believed in Islamic dress as a symbol of this transformation traveled to parts of Central Asia, North Africa, the Persian Gulf, and Turkey to promote their ideas. The jilbab worn in Syria, Jordan, and Palestine is called "rupush-rusari" in Iran. There were limits to their success, however. In her essay in Iran and the Surrounding World, Nayereh Tohidi notes there were differences in language (Persian vs. Arabic), religious practices (Shiʿa vs. Sunnī), and a general dislike for restrictive styles of dress based on the chador.

"In June 1992, when a delegation of twenty-two Islamist women … visited Baku, Azerbaijan, their heavily-covered figures in chadors in Baku's hot summer brought stares and disdainful reactions everywhere they went. They met with the same reaction in Tajikistan and the rest of Central Asia during visits in the early 1990s. On one occasion, a middle-aged Azeri woman asked me to translate a question…. "Don't you feel hot under this heavy black garment in this hot summer? … "But the fire in hell is much hotter if one fails to follow Allah's orders," one of the Iranians replied. Baffled by her response, the Azeri woman mumbled, "What a cruel God you have! The Allah of Islam that I know of is much kinder to women" (Tohidi, p. 20)

Since that time, ideas about these styles of dress have spread more indirectly through religious books and pamphlets, videos, television programs, and the Internet. In the United States and Europe, Muslims from many different countries have been brought together to worship in neighborhood mosques.

Berns McGown, Rima. Muslims in the Diaspora: The Somali Communities of London and Toronto. Toronto: University of Toronto Press, 1999.

Tohidi, Nayereh. "The International Connections of the Women's Movement in Iran." In Islam and the Surrounding World. Edited by Nikki R. Keddie and Rudi Matthi. Seattle: University of Washington Press, 2002.