The kain-kebaya is a jacket-blouse and wrapper ensemble that forms the basis of national dress for Indonesian women. The long-sleeved kebaya comes in two lengths, at the hip (kebaya pendek) and near the knees (kebaya panjang). The five-centimeter-wide collar-lapel runs from neck to bottom hem. The kebaya is closed in two ways-one (Kartini kebaya) in which the collar-lapels meet from breast to hip and are closed with broaches or concealed pins, and the second (kebaya kutu baru), in which the kebaya is open like a jacket, with a rectangular panel bridging the collar-lapels on either side to cover the breasts. The panel is closed at center with four small buttons, or at the side with snaps by the collar-lapel. The Kartini kebaya style of closure is found on short and long kebayas, while the kebaya kutu baru closure style is found on short kebayas only. The kebaya is made of light-weight material in lace, cutwork, or embroidery, in printed or solid silks, cotton, and synthetics. As Javanese wedding apparel, the kebaya panjang comes in velvet with gold embroidery.

Kain literally means "cloth"; a traditional Indonesian kain is approximately 87 inches (220 cm) long by about 40 inches (100 cm) high and, when wrapped at the hips, extends to ankle length. A kain can be batik, silk, or other cotton. A kain panjang (long cloth) refers to a batik, a cloth, traditionally cambric cotton, whose surface design has been created by means of wax and dye steps. The kain panjang ends could be pleated or arranged in a special drape for formal wear. The kain can also be a batik sarong, a rectangle, shorter in length than the kain panjang, around 100 inches (180 cm) to 87 inches (220 cm), whose end seams are sewn together to make a tube. A woman wearing a kebaya and a batik sarong would still be described as wearing a kain-kebaya.

The kain-kebaya is worn for both everyday wear and formal wear, distinguished by quality of material and addition of accessories. Central to the kain-kebaya is the "belt"-a corded cotton band, stagen, that is 40 feet (12 m) long by 5 inches (12.5 cm) wide, that is wrapped around hips to just under the breasts. For formal wear, a solid-colored stole, or selendang (88.5 inches [2.25 m] by 20 inches [.5 m] wide) is draped over the right shoulder, folded to a band of about 4 inches (10 cm) wide. In everyday use, the selendang, generally in batik, would be worn as a baby carrier in front, or to carry a basket of goods at the back. Hair would be pulled back into a large chignon (konde) at the nape of the head; low-heeled sandals, earrings, a necklace, and rings would complete the formal dress.

Origin of the Kebaya 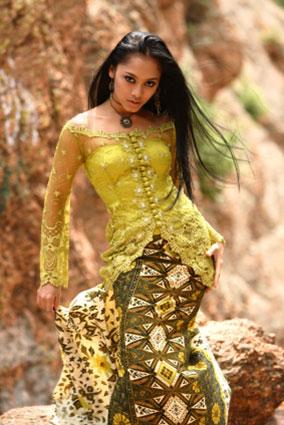 The kebaya has its origins in a garment brought over by Moslem traders from India. Prior to Moslem influence, women wore flat textiles wrapped about their body; Moslem influence required that women cover their arms and torsos. They brought over cut and sewn garments. The baju panjang, a long-sleeved, knee-length gusseted garment still worn in the early 2000s in the south coast of Sumatra, was the forerunner of the kebaya up until the late nineteenth century. The Moslem presence remained in the coastal regions of Java and nearby islands from the fifteenth century, but a central Javanese sultan was aggressive in his spread of Islam by the seventeenth. While no certain evidence exists, it's possible that the baju panjang was being worn even then.

As early as 1840, Eurasian women in the north coast of Java began designing and manufacturing batiks for sale to Europeans, Chinese, and other Eurasians. Their batiks made for sarongs were characterized by bold colors, an overall repeat punctuated by a wide panel of triangle border or floral bouquet. Eventually, as evidenced in late nineteenth-century photographs, the predecessor baju panjang shortened to the kebaya pedek (the short kebaya is the default kebaya) to better show off the vibrant north coast style of batiks.

The kebaya kutu baru (short kebaya with panel over the breast) seems to have developed in the late nineteenth century as well, though this subject deserves more research. Djumena states that the panel insert was an innovation developed in Yogya and Surakarta courts, but does not give a date. A photograph dated 1905 of a Javanese regent's family shows one woman in a kebaya kutu baru and four others in other styles of kebaya.

Taylor calls the kain-kebaya "a costume for all women" in the nineteenth century, because women in villages, royal courts, and European spouses of colonialists (though only at home, as morning attire) all wore them. The quality of the kain-kebaya linked women to the social status of their spouse.

Indonesia's first president declared the Javanese kainkebaya as Indonesia's national dress for women. In the 1950s and 1960s, it consisted of a kebaya kutu baru (with the panel) in sheer floral or lace, with a brassiere visible underneath, the stagen exposed, and a central Javanese style batik with or without pleating, the hair in a large konde with a jeweled hairstick, low-heeled sandals, narrow, solid-colored selendang, pendant on a chain, and stud earrings. This style of dress would be worn for formal occasions.

In the 1980s and 1990s, the kain-kebaya as national dress included stylistic variations as Indonesian fashion designers incorporated textile traditions throughout Indonesia and fashion trends from the Western hemisphere. Iwan Tirta introduced several variations. His selendang and kain pajangs were matching batiks, and were draped on the arm like the 1980s' world fashion of wearing big scarves on the shoulder. His kebayas were always a solid color, and when puffed sleeves were stylish in the mid-1980s, his kebaya had them. He popularized the kebaya panjang and Kartini kebaya that closed in front with ornate broaches. It became acceptable to wear other textile traditions besides batik as national dress. As late as the early 2000s, Indonesian fashion designers popularized the kebaya, creating a variety of styles and making it part of leisure world-dress ensemble, as worn with jeans, or skirts, or shorts for middle-class Indonesian women.