The kilt has come to signify a natural and unmistakable masculinity, but it has a long history of outside intervention and deliberate reinvention. From its origins as the basic garb of the Highlander, Scotsmen and non-Scotsmen alike have embraced it as uniform, formal and semiformal wear, and casual, everyday wear. The kilt's ability to remain recognizable while responding to changing circumstances and consumer demands has been instrumental in maintaining its popularity through successive generations and, increasingly, throughout the world.

The kilt as we know it today originated in the first quarter of the eighteenth century. Known to the Gaelic-speaking Highlander as the "little wrap" (feileadh beag), it evolved from the "big wrap" (feileadh mor), or belted plaid, the first identifiably "Scottish" costume that emerged in the late sixteenth century. Earlier, the Scottish Gaels had worn the same clothes as their Irish counterparts, namely a shirt known in Gaelic as the léine and a semicircular mantle known in Gaelic as the brat.

The belted plaid consisted of a four- to six-yard length of woolen cloth about two yards wide. In Highland Costume (1977), John Telfer Dunbar explains how the belted plaid was arranged on the body. It was laid out on the ground and gathered in folds with a plain section left at each side. The man lay down on it with one selvage at about knee level, and fastened it with a belt. When he stood up, the lower part was like a kilt, and the upper part could be draped around the body in a variety of different styles. Several dress historians, however, have discounted this method on the grounds of impracticality. They propose that the most pragmatic and time-effective method was to gather the pleats in the hand, pass the plaid around the body, secure it loosely with the belt, and then tighten it after a final adjustment of the pleats.

The kilt as worn in the early 2000s is the lower half of the belted plaid with the back pleats stitched up. Its invention is credited to Thomas Rawlinson, an English ironmaster who employed Highlanders to work his furnaces in Glengarry near Inverness. Finding the belted plaid cumbersome, he conceived of the "little kilt" on the grounds of efficiency and practicality, a means of bringing the Highlanders "out of the heather and into the factory" (Trevor-Roper 1983, p. 22). However, as Dorothy K. Burnham asserts in Cut My Cote (1973), it is more likely that the transformation came about as the natural result of a change from the warp-weighted loom to the horizontal loom with its narrower width.

Romanticism: The Kilt as National Dress 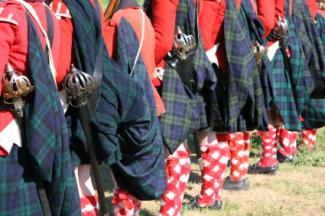 Not long after the kilt's invention, the Diskilting Act was passed in the wake of the Jacobite Uprising of 1745. This rebellion, organized by Prince Charles Edward Stuart (Bonnie Prince Charlie), marked the final attempt by the Jacobites to regain the British throne. As in the previous Jacobite risings, the "Young Pretender" sought and won the support of many Highland chiefs and their clans. When the Jacobites were defeated at the Battle of Culloden (1746) by the duke of Cumberland and his troops, a campaign of "pacification" of the Highlands was undertaken "beginning with fire and the sword, and leading on into social engineering of various kinds" (Chapman 1992, p. 125). The latter included the proscription of Highland costume, which was seen as a symbol of rebellion and primitive savagery.

The Diskilting Act made an exception for those serving in the armed forces. Originally, the Highland regiments were dressed in the belted plaid, but in order to conform to the other regiments of the British Army they wore a red coat cut away at the skirts to allow for its voluminous folds. Other distinctive Highland features of the uniform included a round blue bonnet, a small leather sporran, red and white knee-length hose, and black buckled shoes. By about 1810, however, the Highland regiments had replaced the belted plaid with the little kilt. At the same time, the small, practical leather sporran developed into a large, hairy, decorative affair. This early-nineteenth-century military style was to have a lasting impact on civilian dress. Several dress historians have claimed that Highland costume would not have survived in civilian form had the Highland regiments not been raised and uniformed in elements of their native dress.

In 1782, through the efforts of the Highland Society of London, the Diskilting Act was repealed. By the time of the repeal, the kilt had fallen out of use as an item of ordinary dress, allowing for what Malcolm Chapman in The Celts: The Construction of a Myth (1992) calls the "romantic rehabilitation of Highland dress." The romantic gaze was a reaction against the urban and the industrial and a celebration of the untamed wilderness. No longer the threat from the North, the image of the Highlands could represent this wilderness within the bustling economy of the "new" Britain. Rather than dangerous, bare-legged barbarians, the Highlanders became admirable, a kilted version of the noble savage.

The romantic rehabilitation of the kilt reached its apotheosis with King George IV's carefully stage-managed state visit to Edinburgh in 1822, during which he disported himself in full Highland dress. This "publicity stunt" promoted the kilt as fashionable wear among the Scottish nobility and, in so doing, helped establish the kilt as the national dress of Scotland. However, the king's clothes, like those worn by Scottish noblemen, were far removed from those worn by the Highlanders of the previous century. Given the fact that they were largely designed for the levee, assembly, and ballroom, the emphasis was on the dramatic and spectacular. As Hugh Cheape points out in Tartan (1991), "'Highland dress' turned into 'tartan costume.' A practical dress with style became … a fashionable dress with little regard for function" (Cheape 1991, p. 52).

Throughout the nineteenth century, aristocratic patronage continued to provide cachet for this new urban-based national style, which began to have "correct" items and styles of wear for day and evening. From the 1840s, it was given new impetus through Queen Victoria's cult of the Highlands. Queen Victoria shared King George IV's romantic vision of Scotland, and in 1852 Prince Al bert bought Balmoral Castle in Aberdeenshire. Parts of the interior, most notably the queen's private suites, were decorated with tartan. Queen Victoria herself wore dresses made from "Dress Stewart" or "Victoria" tartan, sparking a trend for tartan fashions worldwide. It was not until the twentieth century, however, that women embraced the kilt as fashionable attire. After World War II, a simplified version of the kilt emerged in the form of a pleated, wrap-around skirt belted at the waist and secured near the hem with a large pin. Popular with middle- and upper-class women, it also formed a component of the uniforms of private girls' schools in England and America, thus maintaining the kilt's connotations of wealth and class privilege.

As Scotland gained a new level of cultural and political confidence toward the end of the twentieth century, "a new generation of [young] radical Scots … reclaimed the wearing of the kilt from the embrace of nearly two hundred years of establishment, commodified gentrification" (Taylor 2002, p. 220). The Victorian styles of day wear and evening wear gave way to contemporary usage. Many younger Scotsmen began to wear their kilts for everyday use with a T-shirt or sweater, a denim or leather jacket, sneakers or chunky, heavy-soled boots, and woolly socks falling around the ankles. As Lou Taylor observes in The Study of Dress History (2002), "Now young Scotsmen wear their kilts according to their own cultural codes and on their own national identity terms" (Taylor 2002, p. 220).

Recently, the kilt has become increasingly popular among non-Scotsmen wishing to project a self-confidently fashionable image. This can be attributed, at least in part, to the immense success of such films as Rob Roy (1995) and Braveheart (1995). In the tradition of the Romantic movement of the late eighteenth and early nineteenth centuries, these films portray the Highlander as "warrior hero," embodying timeless, masculine values. This image has been reinforced in the arena of sport, most obviously through the Highland Games, now broadcast around the world. In putting the shot, tossing the caber, and throwing the weight, men of obvious stamina are shown competing in kilts. Most recently, however, Scottish football supporters have promoted the Highlander as a beau ideal. Their tribal antics and kilted uniforms received widespread publicity in France during the World Cup in the summer of 1998. Through such images, the kilt has come to represent a ready access to Highland male sexuality. For non-Scotsmen, it provides the means of asserting a self-consciously yet unambiguously masculine persona.

Contemporary designers have drawn heavily on the kilt's hypermasculine connotations in their attempts to appeal to the young fashion-conscious male. At the same time, various designers have attempted to blur the lines between the "kilt" and a "skirt" by reworking elements of the kilt's design. Most typically they have focused their efforts on foregrounding the cut over the culturally specific tartan, employing nontraditional "street" materials like denim or leather, and even adapting its cut, length, and construction. These "skirt-kilts" offer men a means of expressing a frank masculinity while simultaneously projecting a self-confidently unconventional persona. As such, they have proved particularly successful among youth and countercultural movements such as punks in the 1970s and new romantics in the 1980s. Since the early 1990s, kilts and skirt-kilts have entered the lexicon of gay fashion. Worn by gay men as an expression of hypermasculinity and a flaunting of perceived femininity, the kilt has become a standard item in the masculinized gay wardrobe.

Chapman, Malcolm. The Celts: The Construction of a Myth. London: Macmillan, 1992.