The term "A-line" is used to describe a dress, skirt, or coat with a triangular silhouette, narrow and fitted at the top and widening out from the bust or waist in a straight line to the hem. More specifically, it is understood to mean a structured garment, which stands away from the body to form the sides of the A. The fronts of A-line garments are often cut in one piece, with darts for fitting, and the skirts often have no waistband.

Origin of the Term A-Line

The term first entered the vocabulary of fashion via the couturier Christian Dior's collection for Spring 1955, which he named the "A-Line." In the 1950s, the international fashion press looked to Paris, and Dior in particular, to set the direction fashion would take each season. Dior obliged by organizing each new collection around a specific idea, and giving each a name that described or evoked that idea. In 1954 and 1955, he designed three closely related collections, based on the shapes of the letters H, A, and Y, which marked a move away from the strongly emphasized, nipped-in waist that had been the dominant silhouette since his 1947 "Corolle Line" (or "New Look") collection. The most influential of these was the "A-Line" collection, characterized by narrow shoulders and a smooth, trumpetlike flare toward the hem; the elongated waistline, either high under the bust or dropped toward the hips, formed the crossbar of the A. The signature look of this collection (the "most wanted silhouette in Paris," according to Vogue, 1 March 1995, p. 95) was a fingertip-length flared jacket worn over a dress with a very full, pleated skirt; while it was clearly an A-shape, this silhouette was quite different from what was later meant by "A-line."

Though the example set by the A-Line collection was not immediately followed, and Christian Dior explored other ideas in subsequent collections, the idea of the A-shape was a success, and the term quickly entered common usage. The A-line was one of a series of controversial mid- to late-1950s looks that de-emphasized the waist and brought an easier, more casual look to fashion; chemise and sack dresses, loose tunics, and boxy suits were shown by Dior, but also by other couturiers, most notably Balenciaga and Chanel. The most dramatic of these, in which the A-line idea was given its ultimate expression, was the Spring 1958 "Trapeze Line" introduced by Dior's successor, Yves Saint Laurent, in his first collection for the house of Dior. The Trapeze silhouette, in which dresses flared out dramatically from a fitted shoulder line, was considered extreme by many, but it did establish the A-line dress, with its highly structured, clean lines, as a suitable look for modern times. A more subdued version of the A-line shape was introduced in the early 1960s, and A-line dresses and skirts remained a popular style choice through the mid-1970s. 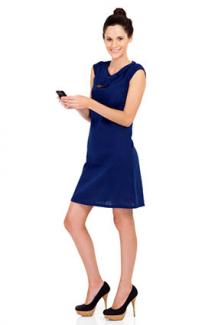 By the early 1980s, however, A-line garments, and flared shapes in general, had almost completely disappeared. The new loose silhouette was an update of the sack shape, with dresses and tunics falling loosely from an exaggerated shoulder line. Some 1960s styles received a retro revival later in the decade, but as long as the shoulders remained padded and the tops loose-fitting, straight skirts were required to balance the look. A-line skirts and dresses were not revived until the late 1990s, when the retro trend embraced the styles of the 1970s, and closely fitted garments with narrow shoulders and fitted sleeves came back into fashion. By this time, following almost twenty years of straight skirts and dresses, the term had been out of use for so long that its earlier, more specific meanings had been forgotten. It is used loosely to describe any dress wider at the hips than at the bust or waist, and a variety of flared skirt styles. With the revival of true A-line shapes in the early 2000s, however, there are signs that the terms originally used to describe them are beginning to return as well.

Keenan, Brigid. Dior in Vogue. London: Octopus Books, 1981. Excellent chronological and thematic guide to the Dior collections and their influence.