The little black dress has long been a star of page and screen, its ability to convey meaning a powerful tool. Edith Wharton's Ellen Olenska in The Age of Innocence wore black and shocked New York's high society when she decided to get a divorce. Majorie Morningstar, the eponymous heroine of Herman Wouk's novel, wore black, as did Mrs. Danvers of Rebecca. Jeanne Moreau was an image of perfection in her Chanel little black dress, chignon, and pearls in Louis Malle's The Lovers. But in The Bride Wore Black, Moreau, also in a Chanel little black dress but now a murderess, was anything but perfect. Anouk Aimee wore her signature dark glasses and little black dress in La Dolce Vita. Catherine Deneuve's little black dress was detailed with white in Belle de jour, creating an image that was at once pure and corrupt. And perhaps the most famous of all little black dresses was Audrey Hepburn's Givenchy in Breakfast at Tiffany's.

At once demure and daring, the little black dress conjures up a host of images and associations. Consistently a symbol of elegance and chic, it is an international fashion icon capable of being interpreted in myriad different styles. Since the late 1920s, some of the world's most elegant women, including Audrey Hepburn, Marlene Dietrich, Maria Callas, and Edith Piaf, have been photographed wearing a version of the little black dress. Coco Chanel claimed to have "invented" the little black dress, and that claim has found its way into fashion mythology. But although Chanel greatly influenced the status of the little black dress as a classic fashion item, beginning with her 1926 introduction of a simple black jersey day dress, many other designers were experimenting with the same look at the same time, and black as a fashion color has a long history.

Historically, black has been associated with mourning and asceticism. By the fourteenth century, however, black was being used to create a dramatic effect in one's appearance. In the fifteenth century, Philip the Good, duke of Burgundy, dressed exclusively in black. He was second to none in the luxury of his dress, but in black this magnificence was conveyed with much greater discretion. Black, expensive to produce with natural dyes and thought to convey an air of refinement, became the color of choice for the fifteenth-century Spanish aristocracy, and connoted wealth and social status among the Dutch commercial middle class.

By the eighteenth century black clothing was considered respectable, even dowdy, as it was associated with mourning and the dress of the clergy. Black was revived as the color of elegance, especially for men, by the dandies of the early nineteenth century. The introduction of aniline dyes later in the nineteenth century created a new vogue for bright colors for fashionable women's clothing; black clothing for women signified mourning, or was a badge of middle-class respectability. When fashionable women did wear black it was to make a statement. One of the most memorable, if controversial, examples of this was John Singer Sargent's 1884 portrait of "Madame X," Virginie Gautreau, dressed in a form-fitting black evening gown. Conventional portraiture employed colorful frilly, even demure dress that all but obscured the subject. That Mme. Gautreau, a socialite of the day whose improprieties were hardly secret, appeared in a seductively form-fitting black gown with deep décolletage was quite a departure, underscoring the subject's decision to play by a different set of rules.

In the early 1900s, black "widow's weeds" were still being sold in department stores, but black was beginning to make appearances on other occasions as well. Paul Poiret made vivid colors fashionable between 1908 and 1914. Chanel claimed to be "nauseated" by Poiret's colors and favored instead black, beige, and navy blue. Her 1926 showing of the little black dress was a milestone in the creation of this fashion icon. However, she was hardly alone. The House of Premet had already had a great success with a little black dress. Indeed, the terrible death toll in World War I had resulted in a plethora of fashionable black dresses.

The little black dress was the ideal mix of elements. It was easy, versatile, and practical; it was also chic, elegant, and sophisticated. Capable of embodying many meanings, the little black dress's chameleon-like quality enabled it to evolve with the trends, but never to be beholden to them.

Of the little black dress, Vogue declared in 1944, "Ten out of ten women have one" (MacDonell Smith, 2003, p. 14). Fashion magazines everywhere featured the new phenomenon. By 1948 Christian Dior's ground-breaking New Look was calling for hem- and necklines to drop and skirts to be fuller. The little black dress obliged. As Dior said in 1954, "You can wear black at any time. You can wear black at any age. You may wear it on almost any occasion. A little black frock is essential to a woman's wardrobe" (MacDonell Smith, 2003, p. 14). 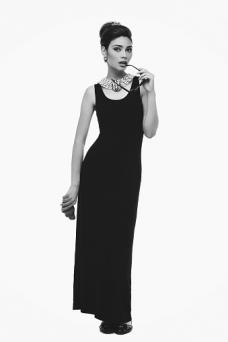 The little black dress's versatility ensured its immortality. Parisian Left Bank intellectuals wore it for its associations with creativity and rebellion. Paired with black tights and black eyeliner, it was the uniform of the beatnik generation. Audrey Hepburn wore black in Funny Face, and a little black dress by Givenchy in Breakfast at Tiffany's.

The 1960s marked a low point in the life of the little black dress. Not only did one of its masters, Cristóbal Balenciaga, retire in 1968, but it was an era focused on a youthful sense of color and fun rather than sophistication and elegance. But a decade later, a new generation of designers began to make it once again the uniform of the modern woman. From Claude Montana's versions in leather to Azzedine Alaia's in stretch fabric, the little black dress took on a more aggressive edge during the late 1970s and 1980s. Showcased at the groundbreaking New York store Charivari, the status of the little black dress was underscored by Helmut Newton, the German-born, Australian photographer, known for his blatantly provocative erotic, sometimes violent images of women. The evolution continued and by the early 1980s a new breed of Japanese designers led by Rei Kawakubo and Yohji Yamamoto reinterpreted the little black dress according to new somber, intellectual criteria. 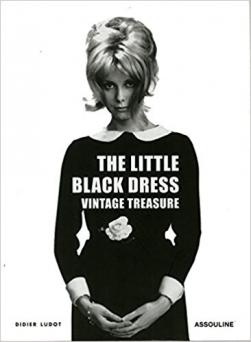