"Macaroni" was a topical term connoting ultra-fashionable dressing in England circa 1760-1780. First use of the term appears within David Garrick's play The Male-Coquette (1757) that includes the foppish character the Marchese di Macaroni. Although used occasionally to refer to women noted for their conspicuous gambling-described, like fashion, as a form of ephemeral expenditure-the term generally referred to the styling of men. The famous observer of manners Horace Walpole makes numerous reference to these figures. In the first relevant letter, dated February 1764, Walpole discussed gambling losses amongst the sons of foreign aristocrats at the "Maccaroni [sic] club, which is composed of all the traveled young men who wear long curls and spying-glasses" (Lewis 1937, p. 306). The "Macaroni Club," was probably the Whig venue Almack's in St. James's, the court end of London.

Macaroni dress was not restricted to members of the aristocracy and gentry, but included men of the artisan and servant classes who wore examples or cheaper versions of this visually lavish clothing with a distinctive cut. To wear macaroni dress was to wear the contemporary continental court fashion of the male suit, or habit à la française, which consisted of a tight-sleeved coat with short skirts, waistcoat, and knee breeches. At a time when English dress generally consisted of more sober cuts and the use of monochrome broadcloth, macaronis emphasized pastel color, pattern, and textile ornamentation which included brocaded and embroidered silks and velvets, some encrusted with chenille threads and metallic sequins. Fashionable men in the late 1760s and 1770s replaced the small scratch-wig of the older generation with elaborate hairstyles that matched the towering heights of the contemporary female coiffure. For men, a tall toupée rising in front and a club of hair behind required extensive dressing with pomade and white powder. This wig was garnished with a large black satin wig-bag trimmed with bows. The use of a pigtail and wig-bag was viewed as a Francophile affectation; so much so that the visual shorthand for Frenchmen in caricature imagery was this device. 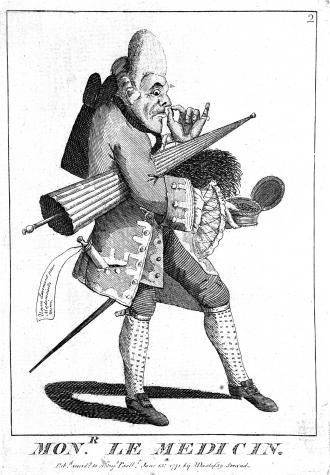 'Monr. Le Medicin', a macaroni with umbrella and snuff box

Macaroni men deployed a number of accessories that characterized court society. These included the hanger sword, which was traditionally the preserve of the nobility, and which in England was fading from general usage. Other Macaroni features include red-heeled and slipper-like leather shoes with decorative buckles of diamond, paste, or polished steel; a tiny nivernais or nivernois hat named after the French ambassador resident in London; large floral corsages or nosegays; chateleines or hanging watches, and seals suspended around the waist; decorative neoclassical metal snuffboxes; and eyeglasses feature in descriptions of macaronies. These objects contributed to an emphasizing of courtly artifice in posture, gesture, and speech further underlined by the use of cosmetics such as face-whiteners and rouge. According to contemporary reports, there was even a highly mannered macaroni accent and idiom, captured in popular ditties of the period. Colors particularly associated with the macaroni include those used in the contemporaneous interior design of Robert Adam: pea green, pink, and deep orange. Striped or spotted fabrics on stockings, waistcoats, and breeches appear to have been popular fashions, sometimes worn in contrasting arrangements.

Macaroni identity was not a peripheral incident in eighteenth-century culture but a lively topic of debate in the periodical press. Motives for retaining elaborate dress requisite at court but not necessary in the streets of commercial London was various, inflected by the class interests and personal motivations of the wearers. Macaroni status was attributed to such famous figures as the Whig politician Charles James Fox (1749-1806), "the Original Macaroni;" the botanist and South Sea explorer Sir Joseph Banks (1743-1820), the "Fly Catching Macaroni;" the renowned miniature painter Richard Cosway (1742-1821); the famed landscape garden-designer Humphrey Repton (1752-1818); the St. Martin's Lane luxury upholsterer John Cobb; Julius "Soubise," the freed slave of the duchess of Queensbury, the "Mungo Macaroni;" and the Reverend William Dodd (1729-1777), the extravagantly-dressed Chaplain to George III. Aristocratic Whig adherents emphasized a version of ultra-fashionable court-dress in order to assert their preeminent wealth and privilege in the face of Tories, the English court, and its more modest Hanoverian monarchy. French and Italian goods and manners had added appeal in that travel to the Continent had not been possible and the importation of French textiles had been banned during the Seven Years War (1756-1763). Alleged macaroni status was used to attack the professional credentials of Joseph Banks within the scientific community; Cosway was similarly ridiculed as an absurd-looking parvenu. Dodd, the "Macaroni Parson," in becoming the subject of a forgery trial resulting in his execution, further highlighted the potency of the macaroni label. 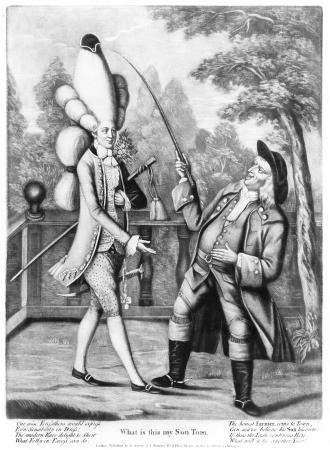 Macaroni dress was lampooned as excessive and bizarre in numerous caricature prints, plays, and satirical texts. The macaronies form the largest subset within the English graphical social satires produced in abundance from the early 1770s. The catalogers of the British Museum caricature collection, Frederic George Stephens in 1883 and Dorothy George in 1935, published a wealth of primary material relating to macaronis that has formed the basis of all further studies. Aileen Ribeiro wrote the first article devoted to them in 1978, and has included them in subsequent studies of eighteenth-century costume, where they are discussed as an amusing episode in the sartorial folly of young men. In 1985 they formed the subject of an article by Valerie Steele that broadened awareness of their social and political influence and helped lift them from the taint of triviality. Diana Donald's study of caricature indicates that a reading of the macaroni type provides important insights into eighteenth-century English society. She highlights their role in defining the English character as sane and measured in contrast to the reign of folly experienced across the Channel. Represented in a wide range of verbal and visual sources, from the press to the theater, the macaronis provided the perfect frame for critique regarding consumption and emulation, as they suggested wild expenditure, the spread of fashionability, and even the cult of gambling in late-eighteenth-century English society.

"Maccaroni [sic], An Italian paste made of flour and eggs; also, a fop; which name arose from a club, called the Maccaroni [sic] Club, instituted by some of the most dressy travelled gentlemen about town, who led the fashions…"

Pierce Egan. Grose's Classical Dictionary of the Vulgar Tongue. Revised and corrected, with the addition of numerous slang phrases, collected from tried authorities. London, for the Editor, 1823 [revised ed. of work published 1785], n.p.

"Such a figure, essenced and perfumed, with a bunch of lace sticking out under its chin, puzzles the common passenger to determine the thing's sex; and many a time an honest labouring porter has said, by your leave, madam, without intending to give offence."

The commonly held explanation for the title "macaroni," that it was derived from a fondness for that Italian dish, may be supplemented in that "macaronic" refers also to a type of mixed language poetry known for its wit, a hallmark of the macaroni stereotype. "Macaroni" thus also suggested the world of the medieval carnival, burlesque, carousing, and excessive food. The macaroni was regularly connected with a slavish and shallow love of things continental and Catholic. The amused suspicion of the English toward these supposedly uncritical followers of fashion is linked to a hostility toward fashionable dress that had colored British life since at least the seventeenth century. This censure had generally been more strongly directed at women, and the macaroni episode shifted much of this attention toward a redefinition of effeminate men. In occasional prints, plays, and satires the macaroni was cast as an indeterminate figure who did not fit normative stereotypes of gender and sexuality. Sometimes the macaroni stereotype took on sodomitical suggestion. Fictional descriptions of "Lord Dimple," "Sir William Whiffle," and "Marjorie Pattypan" deployed the notion of a neutral or unnatural gender in which "inappropriate" feminine attributes were grafted onto male appearance, dress, and behavior. The attributes of the Regency dandy (circa 1800)-deviant masculine consumption, nonreproductive irresponsibility, a rejection of middle-class gendering, a creation of the male body and home into a work of art-are firmly evinced in the macaroni type. As a foppish type, the macaroni also shares characteristics with the precursor, the seventeenth-century Restoration fop. The macaroni fashion preferences, however, were quite different and the two should not be conflated. The macaroni remains commemorated within the song Yankee Doodle (1767)-"Yankee Doodle Came to Town/Riding on a Pony./Stuck a feather in his cap/And called it Macaroni"-in which the appearance and masculine identity of the American troops is ridiculed within the theater of war.

Stephens, Frederic George, and Edward Hawkins. Catalogue of Prints and Drawings in the British Museum. Division I. Political and Personal Satires. Vol. 14, A.D. 1761- A.D. 1770, London: Trustees of the British Museum, 1883.