The following definition of mantua was published in a book that recorded symbols for coats of arms and was compiled in 1688 by Randle Holme, a third-generation craftsman in that field. It is the earliest known definition of the style:

"A Mantua is a kind of loose Coat without any stays in it, the body part and sleeves are of as many fashions as I have mentioned in the Gown Body; but the skirt is sometime no longer than the Knees, others have them down to the Heels. The short skirt is open before, and behind to the middle: this is called a Semmer, or Semare: have a loose Body, and four side laps or skirts; which extend to the knee, the sleeves short not to the Elbow turned up and faced. "

The mantua style was introduced in the 1670s and remained fashionable until the beginning of the eighteenth century. Distinctive features of the mantua are its loose-fitting unboned bodice and the fact that it was cut in one length instead of cutting the bodice and skirt as two separate pieces. The loose-fitting over robe with a train was draped up and pulled back to reveal the petticoat. It was unboned but worn with a corset. The mantua is thought to have originated as informal dress to provide relief from the heavily boned bodices of the grand habit that was the style at court. The mantua had a kimono-like construction inspired by imported Indian robes worn as dressing gowns in Europe. In its earliest form, the mantua was constructed of two long pieces of fabric that ran from the front hem over the shoulders and down the back to the hem of the train. The textile was cut only minimally-at the neck and under the arm to the waist. It was recognized that styles would change and it was advantageous to have as much fabric available to convert it to the new style. Its one-piece construction formed the basis of much of women's clothing in the eighteenth century. Sack gowns of the early eighteenth century directly evolved from the mantua style.

Its loose fit and reference to dressing gowns gave the mantua an air of undress that Louis XIV considered too informal to be worn at French court functions. The mantua was supposed to be worn only in one's own chamber or at specific country residences of the court. Despite royal disapproval of the style, the mantua was the height of fashion in town and became the dominant fashionable garment for women through the beginning of the eighteenth century. Another important distinction from the grand habit of the court was that the mantua covered the shoulders. Ladies appreciated the warmer, more comfortable style over the off-the-shoulder cut of the grand habit which had to be worn no matter what the temperature.

As the mantua evolved it became more formalized and was accepted at court. The loose folds of the bodice were stitched down into pleats for a closer-fitting shape. Eventually it was allowed for all but the most formal occasions at court, and even crystalized in varied forms as court dress in England through the eighteenth century. 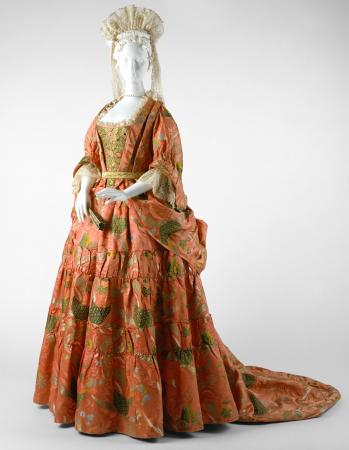 The overall appearance, textile, trimmings, and accessories of a mantua were far more important than the fineness of its construction. The largest portion of the cost of any new garment in that period was the fabric. Careful consideration was given to the cutting of the textile and placement of dominant motifs, but the inside stitching was sometimes quite coarse and uneven. Distinctive brocaded silk damasks now known as bizarre silks, fashionable from circa 1695 to 1720, were often used for the mantua. Characterized by elongated, asymmetrical patterns that combined natural and abstract motifs, bizarre silks used bold color combinations and textured gold and silver metallic threads. The combination of textures and colors of these textiles created spectacular effects in a mantua's flowing appearance. The surface of gold and silk threads change with movement, casting light and dark within the free folds of the draped train.

The interest in scientific and technical experimentation, and the influence of exoticism from imported goods from the East, coupled with the increasing demand for luxury and change of the late seventeenth century, came together to create free and dazzling bizarre silk designs. The vertical lines of the mantua complemented the long, flowing lines and large repeats of the bizarre silks. An average vertical repeat of a bizarre silk at the height of the movement was nearly 27 inches, 10 across (69 centimeters and 26 centimeters across). Commonly, the design repeated across the width of the textile twice.

Mantua makers used a combination of flat cutting and draping. First, the pieces of the garment were cut from the fabric according to measurements taken from the client. Second, the long center back seam was sewn with close stitches in the bodice, and long loose stitches below the waist. The bodice area that fits more closely and takes more stress with movement than the lower parts requires closer stitching. Side gore pieces would have been added to the sides of the main panel to make the dress wider below the waist. These seams were sewn in two different ways depending on whether the mantua was of the lined or unlined style. If the mantua was lined, the seams were sewn in the conventional manner of placing the right sides together leaving the outside with a clean finish. If the robe was unlined these seams would have been sewn wrong sides together so that the seam allowances were on the outside of the dress. The draping back of the front edge of the mantua positions the inside of the mantua to the outside in this area. Fabrics that were attractive on both sides were joined with special mantua-makers seams giving both sides a clean finish for the draped arrangement of the skirt of the mantua.