The debut of the miniskirt in the early 1960s can be compared to the birth of rock'n'roll music. When rock'n'roll took hold in the 1950s, parents and clergy were up in arms, railing against it. They were hopeful that it was a fad that would play itself out and fade away. Neither the miniskirt nor rock'n'roll has faded away. They have both endured and continue to serve as chief symbols of youthful rebellion.

Fashion history is characterized by the shifting focus on one female "erogenous zone" of the body to another. The fashionable Victorian silhouette focused attention on the waist, bosom, and hips through the use of corsetry. By the beginning of the twentieth century, the "mono-bosom" was prominent. During the 1920s, the flapper-style dress, which was based on a loose tunic or tubular shift, dared to reveal more of the female leg than ever before in modern Western history. However, fashion reverted to longer hemlines by the 1930s. Just as Art Deco set the stage for modern art, so did the fashions of the Jazz Age pave the way for the miniskirt.

While the decade of the 1950s embraced prescribed rules of dressing for special occasions and time of day, there was a new freedom in the area of casual clothing. The ideal fashionable woman was a statuesque adult, and young women were expected to imitate adult styles when it came to dressing. Teenagers tended to wear grown-up versions of clothing, except for casual wear. But rumblings of change were in the air.

American teenagers of the 1950s and 1960s, later dubbed baby boomers, were taking note of each other on television dance party shows spawned by Dick Clark's "American Bandstand" in Philadelphia, especially after it went nationwide in 1957. Great Britain, which lagged behind the United States in recovering from World War II, was also giving birth to its own baby boomers. Among them was the intrepid Mary Quant, whose name is forever linked with the creation of the miniskirt.

Quant was part of the restless youth culture in the Chelsea section of London. Along with her friends Alexander Plunkett Green (who later became her husband) and Archie McNair, Quant felt that clothing for her age group did not really exist, so they opened their own shop called Bazaar in 1955. Quant infused her designs with a fresh, youthful energy, and even appeared at Buckingham Palace in a miniskirt to receive the Order of the British Empire in 1966. Along with the Beatles, Quant reinvigorated British culture, helping to launch the phenomenon known as "swinging London." Quant once noted, "London led the way to changing the focus of fashion from the Establishment to the young. As a country we were aware of the great potential of these clothes long before the Americans and the French."

Short skirts were incompatible with garters and stockings, making tights a vital new option. Already in the early 1940s, American designer Claire McCardell had presented her tunic-jumpers with dance leotards. However, the relatively high cost of producing tights kept them a novelty until the 1960s, when colored tights diffused some of the overt sex appeal of the miniskirt. Soon panty hose had largely replaced stockings and garter belts.

By 1960, more than half of the world's population was under the age of 25, but it took some time before the Paris haute couture recognized the emergence of youth style. By the early sixties, however, even couture-trained designers, such as Pierre Cardin and André Courrèges, began designing youthful styles.

When Courrèges presented his autumn 1964 collection, it affected fashion as dramatically as Christian Dior's "New Look" had done in 1947. Courrèges' 1964 collection included stark, modern designs that were futuristic and electrifying. In addition to carefully sculpted tunics and trousers made out of heavy wool crepe, Courrèges created his version of the miniskirt. He paired his shorter skirts with white or colored leather, calf-high boots that added a confident flair to the ensemble. This look became one of the most important fashion developments of the decade and was widely copied. Scores of other designers embraced the miniskirt concept and strove to adapt the look for clients of various ages. 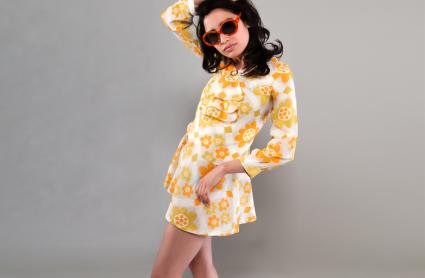 While the miniskirt did not always complement each and every figure, almost every Western woman eventually tried some version of the style during the 1960s. Young women were the first to embrace it, despite resistance from parents and school administrators. The miniskirt became a symbol of the sexual revolution, as the contemporaneous invention of the birth control pill liberated women from the specter of unplanned pregnancies.

Whereas during the early twentieth century short hemlines were associated with prostitutes and theatrical performers, by the 1960s short hemlines were also adopted by "respectable" women. The miniskirt was synonymous with Mod style. By 1969 the miniskirt evolved into the "micro-mini." As Mods gave way to hippies, however, subcultural styles increasingly emphasized long, romantic skirts. By 1970, the fashion industry had launched "midi" and "maxi" skirts, which dominated the following decade.

In the early 1980s, the miniskirt made a comeback, linked again with the power of music and the rise of MTV. Music videos promoted highly charged, sensual images of female performers wearing skimpy clothing. Rap and hiphop performers have promoted their music by using mini-clad women in their videos. The miniskirt, first unleashed by Mary Quant and André Courrèges, has come and gone every few seasons on the fashion runways, but it has become a mainstay of popular culture.

Lehnert, Gertrud. A History of Fashion in the 20th Century. Cologne: Köneman, 2000.