Occultism is any nonmainstream Western system of spirituality that uses magic, the definition of magic being the way in which internal thoughts are used to affect changes in the outside world. Occultists, such as northern European Pagans (e.g., Wiccans, Druids, and witches) and ceremonial magicians (Cabalists, hermetics, and the like) practice magic as part of their religions. Occult dress is used when participating in magic rites, rituals, or ceremonies. Western occult dress has three primary functions: (1) to psychologically place the wearer in an extraordinary sense of reality; (2) to identify the status of the wearer within a social group; and (3) to indicate the beliefs of the wearer.

Clothing of the Occult Movement

Occult beliefs promote nudity as occult dress, because clothing is believed to impede the flow of magical energies through the body from the surrounding environment. Wicca practitioners and witches have traditionally performed rites in the nude to show their devotion to the Wiccan goddess. Due to modesty or weather, some occultists wear robes or tunics with bare feet and no undergarments. This latter dress is believed to still allow the flow of magical energies. Many covens and magical groups have set occult dress guidelines, using tradition or personal tastes as a basis for these guidelines. Occult dress, especially nudity, is not a common Western mode of dress, therefore it psychologically alerts and reinforces the awareness of special occasions and presence of magic for occultists. Each magical group sets the guidelines for occult dress. There is not a specific literature, although a magical group may draw inspiration from books, movies, or even more mainstream cultural practices.

Some occult groups don garments symbolically colored according to a ceremony or rite. For example, a Northern European Pagan coven may don white clothes to celebrate Yule rites and green clothes to celebrate Beltane festivals. Ceremonial magic groups, such as the Hermetic Order of the Golden Dawn, have an extensive magical color symbolism, and thus certain colored clothing is worn for a specific ritual. This is done in order to mentally link the practitioner to the rites being performed, raising awareness and effectiveness of the spiritual ritual.

Occult dress is also used to indicate status within a group. Wiccan high priestesses of Alexandrian lineages indicate status to other initiates by a colored leg garter. Also, a waist cord may be worn in the same group to indicate the wearer having taken oaths pertaining to a level of initiation. Other occult groups, such as the Order of Bards, Ovates, and Druids, who originated in England, wear colored robes denoting rank during some occult ceremonies.

Cultural disposition is another motivation for specific occult dress. For example, Asatru practitioners may don tunics and mantles of historic Germanic styles to denote their affiliation to the ancient Teutonic religion. Celtic knotwork designs on clothing and jewelry may be worn to show an affiliation to Druidism and other ancient Celtic spiritualities.

Western occult dress tends to be self-manufactured (sewn by the practitioner or by a fellow occult member), or if technical skills are lacking, utilizes existing everyday clothing for a magical purpose such as a silk bathrobe purchased at a department store that could be worn in ritual as magical raiment.

Jewelry is used to indicate occult status or beliefs. A Wiccan priestess may don a silver tiara or crown emblazoned with moon-phase symbols, while a Wiccan practitioner or a Witch may wear a necklace with a moon or feminine symbol. Both silver metal and the moon symbolize the Goddess and feminine energies. A Wiccan priest may wear a headdress of antlers to symbolize fertility, fecundity, and the God of Wicca. A high priest or other practitioner may wear a necklace or torc decorated with appropriate spiritual symbols.

The pentacle, a disk emblazoned with a five-pointed star known as a pentagram, is commonly worn by many occultists as a token of affiliation to a nature-based pagan religion. The pentagram's points symbolize the elements of air, earth, wind, fire, and spirit, important concepts in northern European paganism. Another common indicator of a belief in a nature-based religion, especially witchcraft, is the Egyptian ankh pendant, worn as a symbol of eternal life.

Practitioners of Teutonic religions may wear an upside-down T-shaped "Thor's hammer." This symbol is used as an overall indicator of Asatru, a name sometimes used for the Teutonic pantheon-based religion. 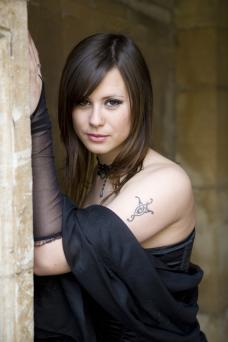 Tattoos may be used to indicate Pagan spiritual beliefs. Celtic knotwork and swirls are common designs employed as indicators of a nature-based religion. Tattoos can be utilized as proof of initiation or devotion. For example, some worshippers of Odin may get a tattoo of three interlocking triangles as a sign of their devotion to that Teutonic deity.

The media generally depicts occultists wearing all-black clothing, especially black robes or cloaks, and having pentacles as jewelry. This stereotypical dress perpetuates the erroneous belief that the occultist is sinful or "evil."

The "witch" is an enduring stereo-type of female occult dress, exemplified by the Wicked Witch of the West from The Wizard of Oz and the witch antagonist from various Grimm's fairy tales. The witch stereotype consists of ragged, all-black clothing, cape, conical wide-brimmed hat, and facial deformities. This stereotype originated in medieval Christianity's attempt to denigrate practitioners of Western Pagan religions. The color black and physical deformities are associated with the concepts of evil and sin, hence the witch stereo-type is "covered" in sin-black clothing and warts. Around the turn of the twenty-first century, the popularity of the Harry Potter book series by J. K. Rowling helped to alter the stereotype of the witch, replacing it with more diversified images and connotations.

The "warlock/Satanist" from cinema, such as those in the 1970s' Hammer horror films, is another Western occult dress stereotype. The male and female Satanist stereotypes typically wear pentacle jewelry, black robes, black hair, and black eyeliner; similar dress is used for the (male) warlock. Since Western cinema has historically dressed the villain archetype in all-black clothing, dressing the occultist in black visually communicates a sinister character to the audience.

In the late twentieth century, some occultists wishing to be recognized in mainstream religious and cultural arenas adopted stereotypical occult dress-black robes, pentacle jewelry, black hair, and black eyeliner. While controversial among occult communities, they visually publicized and communicated occult membership and beliefs by wearing this type of dress.

Occult dress has also influenced subcultures. The dark-romantic Goths, some heavy metal music fans "headbangers," and a variety of vampire subcultures utilize elements of occult dress, especially stereotypical components, such as black clothing and pentacles. Occult dress styles are more commonly worn by these subcultures as a symbol of subculture affiliation, rather than as an indicator of religious or spiritual beliefs and practices.