The sarong is a wrapper sewn together into a tube. Both men and women in Indonesia and other parts of Southeast Asia wear it. In Indonesia the sarong is an item of everyday dress as well as an essential component of formalized ethnic dress. It is made in a variety of fabrics, including woven plaids, batik, warp ikats, songkets, or silk plaid and/or silk weft ikats. Hollywood's appropriation of the sarong has imbued it with exotic and erotic overtones and reinterpreted it as a wrapper rather than a tube. As a result, in the Western hemisphere the sarong has come to be defined in popular usage as a cloth wrap-per, not as a tube.

The Southeast Asian sarong is typically made of mill-woven cloth and is about 100 centimeters high and up to 220 centimeters in circumference. The wearer steps into a sarong, secures it at the hip (or under the arms, a variant for women) either by lapping both ends to meet in the center or by pulling the sarong taut at one side of the body and lapping the remaining fabric to the front, and then rolling the top down and tucking it in or tying the ends in a knot. In this way, hip to ankle are covered.

As a multipurpose garment, the sarong is worn in other ways as well. For women it might be secured under the arms to sleep in or to walk to the river for a bath. Male laborers in T-shirts and shorts hike it at their hips or wear it over their shoulder like a sash when working, only to wear it about their legs on the return home. Enveloped about a person, the sarong serves as a blanket against cool nights.

Origin of the Sarong

The sarong was the dress of the seafaring peoples of the Malay Peninsula near Sumatra and Java; according to Gittinger, it was subsequently introduced on the island of Madura and along the north coast of Java. In the late nineteenth century, an observer recorded its absence in the Java interior. Early sea traders in these waters were Moslems from India, and Islam spread from the coastal areas, so it is thought that these early sarongs may have been woven plaids, which were associated with Moslem men.

What makes the cloth produced for sarongs unique is the decorative panel (kepala, head) that contrasts with the rest of the fabric (badan, body), seen at the front when lapped over and secured. In a plaid, this panel may vary in color and/or weave.

One of the earliest panel configurations in batik sarongs of the north coast of Java and Madura is two rows of triangles (tumpal) whose points face each other. Traders brought chintzes from the Coromandel Coast of eastern India whose ends were rows of triangles. When sewn together, this created what is now the kepala, and eventually the two bands of triangles were positioned as a set at the end of the pre-sewn batik sarong. The tumpal motif is found on gold thread songkets of Sumatra and triangle end borders are seen in ikats, perhaps an influence from Indian chintzes.

In the clothing traditions of Java and adjacent western Indonesian islands, the sarong is an alternative to the kain (cloth wrapper). North coast batik sarongs are noted for their floral bouquet kepala and exuberant colors. At the turn of the twentieth century, Eurasian batik makers experimented with new chemical dyes and motifs, and the thigh-length jacket blouse (kebaya) worn with the sarong was shortened to hip length to better show off the kepala panel. The sarong is not as long as the kain panjang (long, cloth wrapper) batiks of court traditions of Yogyakarta and Surakarta in central Java. The kain panjang batiks are of an overall pattern, without a kepala panel; they are usually made with subdued colors such as browns, indigos, creams, and whites. When wrapped about the lower body, the end might be fan-folded in tight pleats, or with a loose drape.

The sarong varies in size and material. In all of Indonesia's twenty-six provinces, there are representative forms of ethnic dress in which sarongs, worn with a sleeved upper garment, figure prominently. In southern Sulawesi the Buginese silk sarong is extra wide. In Maluku sarongs are layered, the first one is long, and the second one is folded and worn at the hips, often revealing a tumpal motif. In Rote, the handwoven warp ikat sarong is narrow and tall; it is about twenty-five inches in circumference and would almost conceal the wearer's head. Here, the sarong is secured at the breasts and the excess folded over, and secured again at the waist with a belt. Another ikat (not a sarong) would be draped over the woman's shoulders. Generally speaking, the overall silhouette was tubular. 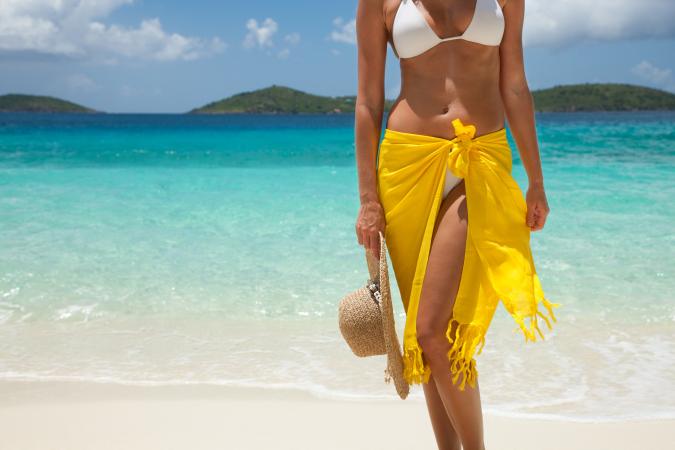 The sarong as appropriated by Hollywood bears little resemblance to the original. Hedy Lamarr in White Cargo (1942) and Dorothy Lamour in Road to Bali (1952) both wear wrappers (more like pareos), tied at the side in a way that emphasizes, rather than concealing, the curve of the hips. We know that what the actresses are wearing is a "sarong," because in Road to Bali Bob Hope specifically refers to Lamour's wrapper by that term. The draped, lapped frontal portion creates a diagonal line revealing the actress's entire leg. Both protagonists wear form-fitting tops baring midriff and shoulder, bangles, heavy necklaces and earrings. Lamarr and Lamour are seated in languorous poses to show off even more skin. The sarong here is a presentation of exotic femininity that is meant to titillate the western film audience. While White Cargo is set in Africa and Road to Bali is set in Indonesia on an unnamed island near Bali, the specifics of place and culture are immaterial. Tondelayo (Lamarr) and the Princess (Lamour) are not "natives," but rather a nebulous mixture of the Western and the "other." They conform to western ideals of beauty and allure, while the "ethnic" dress they wear is a fabrication of Hollywood costume designers, unrelated to anything attested in the anthropological record. What is depicted is the "East" as orientalized by the West.

According to Jones and Leshkowich, "Oriental" elements of clothing and decorative arts became part of the Western retail lifestyles markets in the 1990s at a time when Asian economic prowess was on the rise. The fashionable sarong as interpreted by Western fashion designers followed Hollywood's imagined version of the sarong as a knee-or thigh-length wrapper, tied at the side. Indonesian fashion designers, participating in self-orientalizing, also offered these Western-interpreted sarongs to cosmopolitan Indonesian women. Clearly, for these designers the sarong now referred to two kinds of dress, one local and one global, where the global one was an orientalizing of the local.