Travel clothing hardly existed as a separate category of dress until the nineteenth century, when new forms of travel beyond horse, carriage, and sailing ship were developed, and when the Industrial Revolution permitted mass production of fabrics, enabling more classes to afford garments that were designed for specialized and infrequent use.

Prior to that, both urban and rural poor and middle-class people did little traveling and relied on whatever outer garments they possessed to protect them from dirt, dust, and the elements. Boots, cloaks, coats with extra shoulder capes, and wide-brimmed hats were available to men riding on horseback or in uncovered vehicles. Upper-class men traveling by horseback relied on the same garments. When traveling in carriages, women in the seventeenth and eighteenth centuries could wear a wool riding habit, more easily cleaned than fashionable silks. The cane-framed calash, a high, folding bonnet, introduced in the late eighteenth century, protected women's high hairstyles from the dust of travel; women's iron pattens worn over shoes also protected from dirt and mud.

Generally, however, the condition of roads, and the lack of leisure time for most people, prevented much travel except among the gentry classes. After 1800, more people could afford travel, with the development of public conveyances like canal boats and stagecoaches (old forms, but increasingly used in America) and new inventions, steamships and trains. Travelers were concerned not only with protection from dirt (soot and sparks from coal engines on trains and steamships, dust and mud on carriages), but about appearing in public among strangers-particularly a concern for middle-class women.

Canal travel was not particularly dirty, but its shared sleeping, bathing, and dressing quarters required its users to pack carefully so that propriety and modesty could be respected. Canal boats offered ladies' bathing and dressing rooms not necessarily connected to their sleeping quarters, so women were advised to pack a full-length, modest dressing gown. Men were expected to sleep in their shirt, trousers, and shoes, removing coat, waistcoat, collar, and cravat.

Railway travel had similar concerns and solutions. With limited room for luggage, a smaller holdall was needed for the duration of the journey. The "shawl strap" was a recommended and seemingly popular solution: a change of clothes and undergarments was spread on a large square of sturdy linen or wool, the edges folded over the clothes, and the whole rolled up and bound with two leather straps.

Steamship travel for leisure was not extensive until the last quarter of the century. The combined effects of seawater and soot from the smokestacks were ruinous to clothes, and during most parts of the year, decks could be chilly. Accordingly, warm, enveloping overcoats were recommended, particularly Ulsters , and fine clothes discouraged. Some guidebooks advised wearing old clothes that could be discarded after the journey. Others addressed seasickness, suggesting women wear dresses that could be donned with minimum effort. Shared bathrooms accessed by a walk down a corridor required, as had canal boats and railway cars, modest wrappers.

Small cabins required packing a minimum of clothes for the journey, allowing the remainder of the luggage to stay in the hold. Steamer trunks, unlike the vast trunks designed to hold the many bulky items in a women's wardrobe for an extensive foreign journey, were only twelve inches high and fit under the cabin's berth. The "shawl strap," beloved of railroad journeys, was often suggested as ideal for the transatlantic trip. 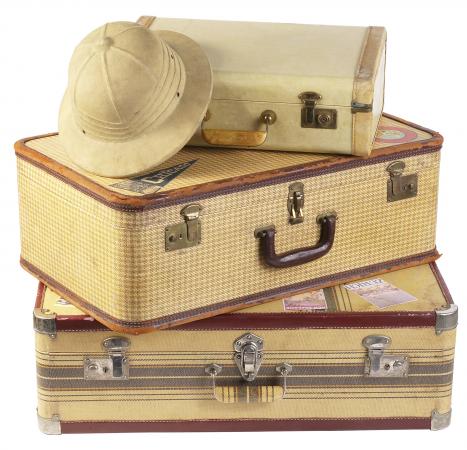 Travel clothing, when referring to extensive foreign travel, takes on two categories: what to wear on the voyage, and what to pack to last for the rest of the trip. Once the rigors of the steamship were over, travelers could resume normal dress, but guidebooks offered comprehensive packing lists, unanimously advising traveling light. Women were advised to bring a few sturdy undergarments without delicate trim to withstand hotel laundries, and a minimum of outfits-the black silk dress and wool tailored suits being top recommendations. Even when travel became more luxurious, women were advised to wear outfits uncluttered by trims and flounces, which were difficult to keep tidy and clean. The tailored outfits that entered women's fashions in the 1870s were ideal for travel.

Travel to tropical climates required specialized equipment such as pith helmets to protect from the sun (with veiling for women) and khaki-colored linen and cotton being logical fabrics and colors in dusty, sandy places. Green-lined parasols-green was thought to protect the eyes-and green sunglasses were also necessary accoutrements.

By about 1900, travel by both sea and rail had become less dirty. Fashion advice for travelers addressed matters of etiquette more than practical issues. Travel costume merely had to fit within pre-existing codes of dress: "The boat is the country, and the train [is] town in the morning," Vogue had only to declare in June of 1925, and its readers knew precisely what was proper (p. 58).

Advent of the Car

Travel by automobile was, in its early years, more of a sport than a mode of travel, and as such its specialized clothing need not be discussed at length here. Open cars required long linen dusters and goggles for both sexes as protection from dust, and ladies wore veils over their hats for some protection from sun, wind, and dust. A uniform emerged for chauffeurs, and long "car coats" kept passengers warm; later in the century, the "car coat" was by definition short, for convenient movement by the driver.

Choosing clothes for airplane travel was also largely a matter of etiquette. While choosing fabrics less likely to wrinkle and show dirt was always a concern, flying in an enclosed cabin did not require specialized clothing. However, luggage design had to adapt to the weight restrictions of airplane travel, and aluminum and smaller suitcases quickly replaced the heavy steamer and other trunks used in railway and steamship travel. Lately, travelers' desire to forgo checked luggage has led to the design of wheeled bags conforming to size restrictions for overhead or under-seat stowing. Additionally, the democratization of travel led to a decline in use of porters, further incentive for designing lightweight, convenient bags.

The later twentieth century saw innovations in synthetic fibers and fabrics useful to travelers seeking clothes that resist wrinkling when packed or worn, take little space in a suitcase, and can be washed in a hotel sink and hung to dry, avoiding costly and time-consuming laundering by a hotel-or easily done in less luxurious locales, as modern travelers venture into locations beyond the traditional centers of culture that were the destinations of nineteenth-century voyagers. Travelers can also purchase garments and gadgets to ease both their airplane journey and the rest of their travels, including specialized toiletry bags and packing organizers; reversible, wrinkle-proof, drip-dry, less bulky dresses and skirts; and garments suited to hot climates. 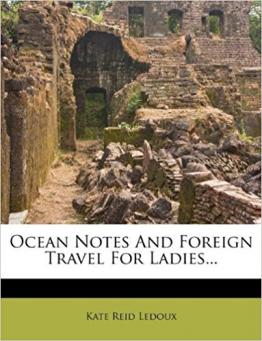