Bifurcated lower-body garments made from textiles, fabric, or leather have existed since ancient times, and trousers rank among the most fundamental pieces of clothing. Ankle to calf-length trousers, wide or narrow, with seamed or wrapped legs were part of the costume of the ancient Chinese, Mongols, Sythians, Phrygians, and Persians. The Sarmatians, the Dakerians, and the Lydians presumably adopted them, after 700 B.C.E., from the Persians. Trouser-clad equestrians seem to have played an important role in their diffusion; even attempts at accurate fitting can be traced back to riding. Depictions of the stocking-like leg coverings, featuring stripes, dots, checks, or zigzag lines, of Asia Minor's soldiers and male and female riders, can be found on ancient Grecian ceramics. The Celts, Germanic peoples, and the Sarmatians were the first to wear the truss, a sort of linen undergarment, in the late Bronze and Iron Ages. Thigh-high and ankle-length trousers, sometimes luxuriously woven and artistically sewn out of fabric and leather, are documented as being worn by men and occasionally women of northern tribes.

The Greeks and Romans of the Classical period thought of trousers as the "garb of the Barbarians," from whom they vehemently strove to distinguish themselves. When, in the second and third centuries C.E., Roman soldiers, and later, common people, began to adopt trousers for practical purposes, it was forbidden to wear them on pain of punishment in Rome. However, after the fall of the Western Roman Empire (fifth century C.E.), Roman dress no longer set the standards for all of Europe. Beinlinge (separate, unattached coverings for each leg) with trusses (a kind of short undergarment) became common throughout Europe. In the early and high Middle Ages, leg coverings-woolen, fastened to the belt of the truss, under long clothes or short tunics-served as protection from cold and as functional clothing. Women as well wore leg coverings in cold weather or when traveling.

Leg Coverings for Under Armor

After 1350, the demand for male leg coverings altered dramatically: as a result of the change in knights' armor from chain mail to plate armor; leg coverings had to fit the contours of the body more closely. The leggings became a second skin and-in response to the style of extremely short men's doublets-were made into a single garment by attaching wedge-shaped inserts or fly flaps. The stocking-like hose of the fifteenth century, with its attached feet and heraldic patterns, may be regarded as the first veritable men's trouser fashion. It is, moreover, the first fashion where men and women went their separate ways, men adopting short tunics and hose, and women keeping to their long skirts.

Trousers Were for Men

This conspicuous marking of gender, through skirt and trousers respectively, continued in Western culture until quite recently. The identification of man and trousers became universal to such a degree, that trousers, in images and figures of speech, have evolved into symbols for man and manly strength. (See for example numerous prints and caricatures on the theme of the "battle of the trousers.") From the fifteenth century until the late nineteenth century, women very rarely donned men's trousers.

The stylish man's bifurcated garment changed its appearance countless times. At first, Italian sheath hose, with their limited freedom of movement, were widened with a slit; in 1500 the garment was separated into knee breeches, laced at the waist, with stockings attached to the breeches. From these developed, in the early sixteenth century, extremely broad, heavily slashed wide breeches lined with colorful fabrics and worn by the mercenary soldier. Despite all regulations (sumptuary laws), and public mockery (pamphlets, satirical drawings), extra wide, heavily slashed and flashily decorated breeches with fantastically padded codpieces remained the fashion during the sixteenth century. In Spain, after 1550, fashionable men began to overstuff their wide breeches, which in turn shortened them greatly, creating two balloon-like legs. Spanish trousers, so-called "military bass-drum pants," were worn in national variants throughout Europe, without codpieces after 1600. During the Thirty Years War (1616-1648), knee-length, extremely wide pantaloons, with decorative side buttons and ribbons, were introduced by the French; these developed, after peace was declared, into the skirtlike, heavily decorated Rheingrave, or petticoat, pantaloons (1655-1680). This extreme form of the 1670s was eventually replaced by the simple culotte, worn as part of Louis XIV's court attire. The culotte was the obligatory part of men's suits until the French Revolution. During the Revolution the culotte or breeches were replaced by the long pantaloons or trousers of working-class men. 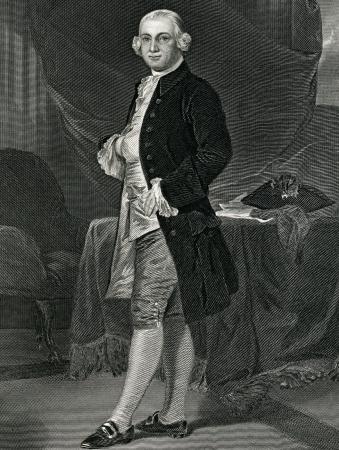 Simple knee breeches, fastened at first under the knee with ribbons and then later with buckles or buttons, were worn by most upper-class men in the eighteenth century until they began to be replaced during the French Revolution by the long work pants of working-class revolutionaries (the sans culottes-"without breeches," socalled because they wore trousers instead). The trousers of the first half of the nineteenth century had varying styles; some were extremely tight, others were broadly pleated trousers (Russian or Cossack pants), and sharply flared, below-the-knee matelot trousers. In the 1830s, trousers were long, close fitting, and equipped with straps that fit under the soles of the feet. In the 1850s, pants legs were looser, and the old trouser fly was replaced by a concealed, buttoned middle slit. The former relatively colorful palette grew increasingly sober from the 1860s on, as dark colors and plain materials became usual in everyday and evening clothing. At the beginning of the twentieth century, pleats and cuffs completed the development of the daytime and evening trouser. At the same time, men's sports and leisure clothing became a field for experimentation with the development of knickerbockers, jeans, Bermuda shorts, chinos, and other styles.

The 1880s represent the first considerable public presence for women's trousers. In the 1840s a minority of women, such as Amelia Bloomer, had demanded a "right to trousers" which had been briskly denied. By the 1880s, however, women bicycle riders in pantaloons, bloomers, or trouser-skirts had become visible in many cities in Europe and North America. By the early twentieth century, trousers for women existed for various leisure activities. The couturier Paul Poiret, for example, launched trousers as fashionable dress for women and caused a great scandal. After World War I, however, when people got used to women in trousers, society accepted fashionable pants as beach-wear or exclusive evening suits.

And yet trousers for women still instigated scandals. Marlene Dietrich, for example, caused an uproar by wearing trousers in Hollywood and Europe. It was only in the 1970s that trousers finally won a secure place in the spectrum of women's clothing. Since then, trousers have become acceptable as women's business, recreation, and evening clothing. In cultures outside Europe, one may trace entirely different fashion traditions. Thus in cold climates, such as Siberia, the indigenous inhabitants developed an "arctic" garment, made of a combination long-sleeved jacket and long trousers of leather or fur, which is virtually identical for both men and women. The "tropical" clothing type, featuring wraparound skirts, also recognizes few gender differences, although sarongs and other wrapped garments tend to be tied differently for men and women. In the traditional dress of many Asian peoples, trousers are often seen on women and dresses are seen on men. Arab, Persian, Syrian, and Turkish women wear traditional leg-coverings, as do Cossaks, and Tatars. In Scotland, on the other hand, the kilt is an emphatically masculine garment.

In the context of spreading globalization, long trousers are gradually coming to replace the traditional masculine dress of cultures outside of the European context. The business suit, a standard in European and American fashion since the nineteenth century, is presently becoming a worldwide norm, and women in most of the world can wear trousers without being accused of being masculine.