The waistcoat, or vest (as it is known in the United States), is a close-fitting sleeveless garment originally designed for men that buttons (or occasionally zips) down the front to the waist. Produced in either single or double-breasted styles, the waistcoat is designed to be worn underneath a suit or jacket, although it does not necessarily have to match. Similar garments are worn by women.

Originating in Persia, waistcoats first became fashionable in the middle of the seventeenth century. The new style was noticed by Samuel Pepys in 1666: "The King hath … declared his resolution of setting a fashion for clothes which he will never alter," he wrote in his diary. "It will be a vest."

King Charles II was persuaded that, after the Great Plague and the Great Fire of London, a much more sober form of attire should be worn by gentlemen, particularly in view of the gross extravagance displayed in the French court at the time. The vest was a knee-length garment that would follow the cut of the coat but would be much tighter in fit. It was designed to discourage the use of lavish materials (such as lace) by covering much of the body in plainer and cheaper material. By 1670, vests had become one of the most important European fashion trends of the time, particularly among nobility who would soon forget the notion of sobriety in favor of opulence and excessive decoration.

By 1700, many waistcoats became much shorter, with skirts reaching above the knee, and few had collars or sleeves. Waistcoat styles designed for sporting purposes did away with any skirt almost completely. As the waistcoat became short it also became more and more cut away in a curve at the front to reveal the wearer's breeches. Whereas elaborately embroidered waistcoats were fastened with hooks and eyes, the majority were fastened with buttons that would match those of the coat being worn.

Double-breasted waistcoats were the most popular style during the first few decades of the eighteenth century and featured small pockets with flaps. By the middle of the century, rather than following the older style of having cuff-length sleeves, the majority of waistcoats were sleeveless; skirts were much shorter and by 1790 were cut square to the waist. Toward 1800, decorated single-breasted waistcoats with small lapels became fashionable; fabrics with horizontal or vertical stripes were particularly favored, especially if the waistcoat was finished with a silk trim.

By 1800, the waistcoat had become an increasingly decorative and flamboyant addition to the male wardrobe. Through various style trends at the time, the overriding principle was that as long as a waistcoat was highly conspicuous, ostentatious, and embroidered, it was deemed fashionable. Single-breasted, double-breasted, waist-length, square-cut, roll-collared, low stand-collared and flap-pocketed styles all were worn. Dandies at the time even took to wearing two waistcoats at once. One would be as elaborate as the other, with the upper unbuttoned to show the one underneath.

Generally speaking, after the mid-nineteenth century, waistcoats became much more sober. The majority were produced to match the jackets or suits they would be worn with, rather than being outward expressions of originality and wealth. 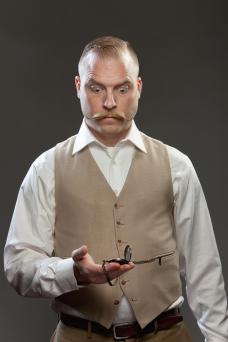 Although the waistcoat was still deemed fashionable at the beginning of the twentieth century, its popularity soon began to wane. Rather than being worn as a show of wealth or decadence, the waistcoat was considered little more than a functional item to house a pocket watch or to finish off a formal evening wear outfit. With suits becoming softer and men opting for the growing trend of the wristwatch, the waistcoat was deemed less than essential for the male wardrobe.

That is not to say that the waistcoat simply died. Many men continued to wear a knitted waistcoat in the winter and a lighter version in the summer; however, it was now seen as an item simply to accompany and harmonize the rest of the outfit.

After World War II, few businessmen were wearing waistcoats to work, and right up to the Peacock Revolution in the 1960s, they had become all but extinct except with the more conservative dressers and those of an older generation. The waistcoat began to revive among fashionable young men, however, who associated themselves with style tribes such as Neo-Edwardians and Teddy boys.

The 1960s also saw the waistcoat move away from being a formal item when it was adopted by the hippies and incorporated as part of their ethnic-inspired or countrified look. The hippy version of the waistcoat still followed the contours of the body, but it tended to be longer than the waistcoat of a business suit; some were knee-length and featured heavy floral embroidery, fringing, and patchwork; some were tie-dyed (a look that would be recreated for the spring/summer 1993 collection by Dolce & Gabbana).

In the early twenty-first century, the waistcoat is seldom worn, except by businessmen trying to show some form of individuality or personality with a suit. Among conservative members of some professions, such as corporate law and banking, a three-piece suit (i.e., trousers, jacket, and matching waistcoat) is still regarded as the most appropriate business attire. But aside from designers such as Jean Paul Gaultier and Dolce & Gabbana reviving waistcoats for men during the 1980s and early 1990s, they are now more likely to be worn as novelty items than to be part of a classic tailored look.