Adinkra cloth is the traditional funerary dress of the Asante peoples of Ghana as well as many of their neighbors. Funerals are among the most lavish of all Asante ritual occasions and are clearly part of their still strong commitment to venerating their ancestors. The scholar J. B. Danquah defines the meaning of adinkra as, "to part, be separated, to leave one another, to say good-bye." Adinkra cloths are distinguished by designs applied with carved gourd stamps and a black dye placed within a rectilinear grid whose divisions are created by a three or four tine comb brushed in measured segments across the length and width of the cloth. Some cloths may feature a single stamped design while others may have over twenty different motifs applied to the surface.

For a cloth to be called adinkra, it must have these stamped designs. If the cloth is to serve as mourning dress, it must be dyed one of three colors-red, russet brown, or a dark blue-black. The latter is not typically stamped. Some sources state that the red adinkra is reserved for the closest members of the family and others assert that this is the role of the brown cloths. Clearly practices vary. Adinkra cloths that remain white or are printed on a brightly colored fabric are designated "Sunday adinkra," and are not used during funerals, but rather as festive dress for a variety of special occasions much like kente cloth.

The earliest known adinkra cloth (now in the British Museum) dates from 1817 and consists of twenty-four handwoven strips of undyed cotton cloth, each about three inches wide and woven on the same type of narrow strip horizontal treadle loom as Asante kente. The strips are sewn selvage to selvage (finished edges of a fabric) to produce a large men's cloth draped over the body toga style with the left shoulder covered and the right exposed. Women wear two pieces, one as a skirt and one as an upper wrapper or shawl. In the early 2000s the latter piece is more frequently fashioned into a blouse.

The use of pieced-together narrow strips of a fixed width undoubtedly influenced the compositional divisions of the cloth as well as the size of the earliest stamps. By the end of the nineteenth century, however, imported industrially produced mill-woven cloth had largely replaced the handwoven strip weaves. Also about this time, the British were producing mill-woven cloth with rollerprinted adinkra patterns for the West African market.

An additional design feature on many adinkra cloths is a further division of the men's cloths along their lengths with bands of multicolored whip-stitched embroidery in combinations of yellow, red, green, and blue. As seen in an 1896 photograph of the then king of Asante, Agyeman Prempeh I, this practice dates to at least the end of the nineteenth century. The embroidery is usually straightedged along the length of the cloth, but an important variant has serrated edges in a design called "centipede" or "zigzag." Although not necessarily referring to adinkra, the Englishman Thomas Bowdich observed this practice in 1817. On some cloths multicolored handwoven strips about one and a half inches in width are substituted for the embroidery.

It is generally accepted that the adinkra genre was heavily influenced from the very beginning by Islam and in particular by Arabic inscribed cloths that are still produced by the northern neighbors of the Asante. These share a similar gridlike division of space and a number of hand-drawn motifs that are readily recognizable as adinkra patterns. Some of the same design principles and motifs are also found on Islamic inspired cast brass ritual containers called kuduo. The Asante attraction to the spiritual efficacy of Islam and to literacy in Arabic has been well documented since the early part of the nineteenth century. Significantly, an Arabic-inscribed cloth is still part of the wardrobe of the current king of Asante. The argument here is that the stamped adinkra cloth was developed as a shorthand for the more labor intensive and explicitly literate Muslim cloths. 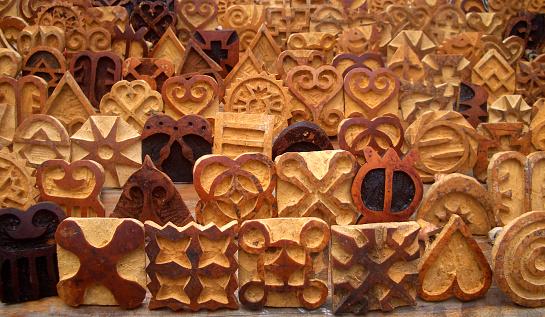 Of particular interest in the study and appreciation of adinkra is the rich design vocabulary found on the stamps. Until the middle of the twentieth century, there were about fifty frequently repeated motifs. As with most Asante arts, there is a highly conventionalized verbal component to the visual images. The meaning of many motifs is elucidated by generally well-known proverbs. A design with four spiraling forms projecting from the center represents the maxim: "A ram fights with his heart and not his horns," suggesting that strength of character is more important than the weapons one uses. A fleurde-lis-shaped stamp is identified as a hen's foot and is associated with the saying: "The hen's foot may step on its chicks, but it does not kill them," that is a mother provides protection and guidance and not harm. A stamp depicting a ladder depicts the inevitable, "The ladder of death is not climbed by one man alone." Perhaps the most common motif is an abstract form that represents what is generally translated as: "Except God," but its sense is better conveyed by "Only God." As with most of their arts, the worldview of the Ashanti is wonderfully articulated in this funerary fabric.

In the twenty-first century, the corpus of stamp designs has expanded to well over five hundred. These include numerous references to the modern world, including automobiles, hydroelectric power, and cell phones. A number of motifs depict the logos of an assortment of Ghanaian political parties that have contended for power since independence (hand, cock, elephant, and cocoa tree). Another trend is a series of stamps that literally spell out their messages. For example, "EKAA NSEE NKOA" carved into a gourd stamp references a longer proverb that translates as: "The woodpecker celebrates the death of the onyina tree." Since the bird nests and feeds in the dead tree, this is a kind of cycle-of-life statement. This practice recalls the origin of adinkra in script-filled, handwritten (albeit Arabic) inscribed cloths.

As with Asante kente, the verbal component of adinkra imagery is an important factor in its popularity in African American communities. Roller printed mill-woven adinkra is nearly as commercially successful as machine-made kente and appears in many of the same clothing forms, including hats, bags, scarves, and shawls. Individual adinkra motifs have even transcended clothing forms to become an important element in graphic design, fine arts, and even architecture.

Glover, Ablade. Adinkra Symbolism. Accra: Liberty Press, 1971. This one sheet chart/poster, reprinted many times, remains the most accessible reference for adinkra. It can be found in many African American bookstores and museums.

Mato, Daniel. Clothed in Symbol: The Art of Adinkra Among the Akan of Ghana. Ann Arbor, Mich.: UMI Dissertation Services, 1987. Ph.D. dissertation is still the most comprehensive study of adinkra to date.

Rattray, Robert S. Religion and Art in Ashanti. Oxford: Clarendon Press, 1927. Chapter 25 is the first substantial reference to adinkra and is still worthwhile.

Willis, W. Bruce. The Adinkra Dictionary: A Visual Primer on the Language of Adinkra. Washington, D.C.: The Pyramid Complex, 1998.