Adire is a resist-dyed cloth produced and worn by the Yoruba people of southwestern Nigeria in West Africa. The Yoruba label adire, which means "tied and dyed," was first applied to indigo-dyed cloth decorated with resist patterns around the turn of the twentieth century. With the introduction of a broader color palette of imported synthetic dyes in the second half of the twentieth century, the label "adire" was expanded to include a variety of hand-dyed textiles using wax resist batik methods to produce patterned cloth in a dazzling array of dye tints and hues.

The Art of Making Adire

The traditional production of indigo-dyed adire involves the input of two female specialists-dyers (alaro), who control production and marketing of adire, and decorators (aladire), who create the resist patterns. In the oldest forms of adire, two basic resist techniques are used to create soft blue or white designs to contrast with a deeply saturated indigo blue background. Adire oniko is tied or wrapped with raffia to resist the dye. Adire eleko has starchy maize or cassava paste hand-painted onto the surface of the cloth as a resist agent. Further experimentation led to two additional techniques. Adire alabere involves stitching the cloth with thread prior to dyeing to produce fine-lined motifs. Adire batani is produced with the aid of zinc stencils to control the application of the resist starch.

The decorator works with a 1 x 2-yard fabric rectangle as a design field, making two identical pieces to sew together to make a square cloth most commonly used for a woman's wrapper. Most wrappers have repeated all-over patterns created with one or more resist techniques with no one focal point of interest. The motifs used in adire and the labels attached to them reflect the concerns of indigenous and contemporary Yoruba life: the world of nature, religion, philosophy, everyday life and notable events (Wolff 2001). Decorators, when not working with stencils, have a mental template in mind based on prototypes where particular motifs are combined together to identify a wrapper type, such as Ibadandun. Some motifs are pictographic, but often bear little resemblance to the thing signified by labels. For example, tie-dyed motifs such as "moon and fruits" have only a passing semblance to what they portray, while some motifs used in adire eleko like ejo (snake) or ewe (leaf) are recognizable.

The History of Adire 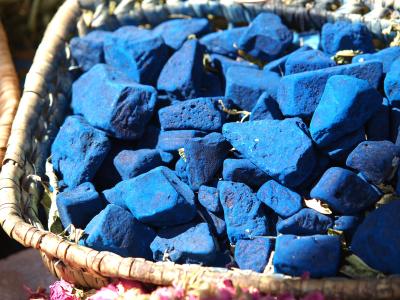 As a distinctive textile type, adire first emerged in the city of Abeokuta, a center for cotton production, weaving, and indigo-dyeing in the nineteenth century. The prototype was tie-dyed kijipa, a handwoven cloth dyed with indigo for use as wrappers and covering cloths. Female specialists dyed yarns and cloth and also refurbished faded clothing by re-dyeing the cloth with tie-dyed patterns. When British trading firms introduced cheap imported cloth and flooded the market with colorful inexpensive printed textiles, the adire industry emerged to meet the challenge. The women discovered that the imported white cotton shirting was cheaper than handwoven cloth and could be decorated and dyed to meet local tastes. The soft, smooth texture of the import cloth, in contrast to the rough surface of kijipa cloth, provided a new impetus for decoration. The soft shirting encouraged the decorators to create smaller more precise patterns with tie-dye methods and to use raffia thread to produce finely patterned stitch-resist adire alabere. The smooth surface of shirting led to the development of hand-painted starch-resist adire eleko. Abeokuta remained the major producer and trade center for adire, but Ibadan, a larger city to the north, developed a nucleus of women artists who specialized in hand-painted adire eleko. The wrapper design Ibadandun ("Ibadandun" meaning "the city of Ibadan is sweet") is popular to this day.

In the early decades of the twentieth century, a vast trade network for adire spread across West Africa. Adire wrappers were sold as far away as Ghana, Senegal, and the Congo (Byfield 2002; Eades 1993). At the height of adire production in the 1920s, Senegalese merchants came to Abeokuta to buy as many as 2,000 wrappers in one day from the female traders (Byfield 2002, p. 114). In the 1930s, two technological innovations to decorate adire were developed that provided an avenue for men to gain entrance into the female-controlled industry. Women retained the dyeing specialty and continued to do tying, hand-painting, and hand-sewing to prepare the cloth for dyeing, but decorating techniques involving sewing machine stitching and applying starch through zinc stencils were taken up by men, because West Africans believe that men have an affinity for machines and metal that women do not. A regional and international economic decline at the end of the 1930s led to a decline in the craft, so that in the 1940s no major innovations in production occurred (Byfield 2002; Keyes-Adenaike 1993). The European restriction placed against exporting cloth to West Africa during World War II (1939-1945) also had negative effects. Following the war, the adire industry was dealt a further blow when the markets were flooded with low-priced printed cloth from European, Asian, and African textile mills. By the 1950s adire production had significantly slowed, and few young people were being trained in the craft. 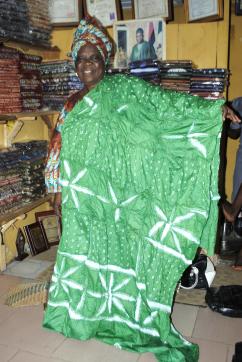 In the 1960s, while rural women were still wearing the indigo-dyed wrappers, urban dwellers considered it "a poor people's cloth" (Byfield 2002, pp. 212-218). However, the 1960s marked a new period of innovation in handcrafted cloth production in Yorubaland. With the growing availability of chemical dyes from Europe, there was a revolution in color and techniques (Keyes-Adenaike 1993, p. 38). Adire patterns caught the eye of Nigerian fashion designers who adapted the designs to print high-quality cloth using imported color-fast dyes in colors other than indigo. Sold by the yard the "new adire" was used for clothing, tablecloths, bedspreads, and draperies (Eicher 1976, pp. 76-77). One expatriate woman, Betty Okuboyejo who lived in Abeokuta, is credited with introducing high-quality adire-inspired cloth using a full range of commercial color-fast dyes to expatriates and Nigerian elites (Eicher 1976, p. 76). New multicolored adire utilized a simple technology and became a backyard industry so that the markets filled with the new adire. This modern form of cheaply produced adire, dubbed "kampala" (because it became popular at the time of the Kampala Peace Conference to settle the Biafra War in Nigeria) was manufactured by individuals with no prior knowledge of dyeing-farmers, clerks, petty traders, and the jobless (Picton 1995, p. 17). Hot wax or paraffin was substituted for the indigenous cassava paste as a resist agent, and designs were created by simple techniques including tie-dye, folding, crumpling, and randomly sprinkling or splashing the hot wax onto a cloth prior to dyeing. As demand grew and the new adire makers began to professionalize, a block printing technique to apply the hot wax developed and largely supplanted stenciling (Picton 1995, p. 17).

In the twenty-first century, the new colorful adire continues to meet fashion challenges and to be an alternative to machine prints. In continually changing patterns, new adire appeals to the fashion-conscious Yoruba in the urban and rural areas. In Nigeria one can still buy indigo-dyed adire oniko and eleko made by older women in Abeokuta and Ibadan and by artisans at the Nike Center for the Arts and Culture in Oshogbo where the artist Nike Davies-Okundaye trains students in traditional adire techniques. But, increasingly, the lover of indigo-dyed adire must turn to collecting pieces from the cloth markets such as Oje Market in Ibadan or from traders who specialize in the old cloth. Soon those also will be gone from the Yoruba scene.

Byfield, Judith. The Bluest Hands: A Social and Economic History of Women Dyers in Abeokuta (Nigeria), 1890-1940. Portsmouth, N.H.: Heinemann, 2002. A definitive history of the peak years of adire production.

Oyelola, Pat. "The Beautiful and the Useful: The Contribution of Yoruba Women to Indigo Dyed Textiles." The Nigerian Field 57 (1992): 61-66.

Wolff, Norma H. "Leave Velvet Alone: The Adire Tradition of the Yoruba." In Cloth Is the Center of the World: Nigerian Textiles, Global Perspectives. Edited by Susan J. Torntore, 51-65. St. Paul, Minn.: Goldstein Museum of Design, Dept. of Design, Housing, and Apparel, 2001. An anthropological approach to production and cultural importance of adire.