Batik is one form of a process known as resist dyeing, in which the surface design on cloth is applied with a semifluid substance (wax, in the case of batik) that resists dye. When the substance is removed the resulting "negative space" or motif contrasts with the dye. Repeated applications of resist and dye create a complex design. Resist dyeing has a broad geographic distribution, historically found on all continents except for the Pacific Islands and Australia. The resist substances include mud, pastes (rice, peanut, cassava, or bean), starch, hot resin, paraffin, and beeswax. Monochromatic palettes of white (cloth color) and dark brown such as the bogolan mud cloths of Mali, or white and indigo as in the batiks of the Blue Hmong are common, and motifs tend to be geo-metric such as those found in West Africa, Turkistan, the Middle East, mainland Southeast Asia, and south China. In Indonesia, particularly on Java, batik developed intricate styles not found elsewhere, and its sophistication is mirrored in the use of batik cloths in Indonesian dress.

The rise of fine batik in Indonesia hinged on the availability of imported high thread count cotton fabric from Europe after the industrial revolution. Women create resist patterns on this cloth by gliding molten hot wax from a copper stylus called a canting, which just barely touches the cloth; coarse cloth would cause snags and wax drips. Both the surface and the underside of the cloth are waxed, so that the pattern is complete on both sides of the cloth. After each waxing, the cloth is dyed, and then boiled to remove the wax. Then another element of the design is waxed and the process repeats. The use of a stylus to create a hand-drawn batik pattern is called tulis ("writing"); the creation of tulis batik takes as much as two weeks for the waxing and a little over a month by the time the final dye bath is completed. Care must be taken to keep from cracking the wax, as this indicates poor craftsmanship.

Toward the middle or end of the nineteenth century, Chinese batik makers on the north coast of Java designed a type of copper stamp called cap (pronounced chop), a configuration of needles and sheet metal strips which was pressed into a hot wax stamp pad and used to transfer the wax to the cloth. Caps were paired as mirror images to wax the top and undersides of the cloth. Cap batik is a much faster process than tulis; a skilled worker can wax twenty cloths in a day.

Classical batik designs from central Java can be grouped in four categories; three are strongly geometric and the fourth is more organic. The first is the garis miring of diagonally running designs such as parang rusak ("broken knife"). The second is nitik, consisting of small dots or scallops as filler in large designs; this pattern imitates the visual effect of woven cloth. The third is ceplok which has grid-formed designs inspired by rosettes and cross-sections of fruit. The fourth is the semen category of styled flora and fauna motifs.

In general, batik designs from the north coast tend to be more organic with mammal, sea creature, bird, insect, and floral themes. These batiks are also more colorful. Traditional batiks from central Java tend to have muted colors of indigo, browns, creams, and whites in geometric motifs. A few, such as the parang rusak, were restricted for use only in the royal palaces of Yogyakarta, Surakarta, and other central Javanese royal courts, but over time those sumptuary laws have fallen by the wayside. 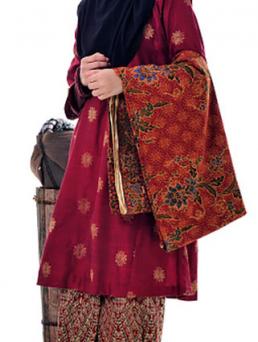 Batik on apparel involves strategic placement of multiple motifs, as can be seen from an examination of different garments: a head cloth (iket kepala), shawl (slendang), two kinds of wrapped skirts (kain panjang and sarong), and drawstring pants (celana). The head wrapper, worn by men, is about three feet long; it is a batik item that is produced in Java and worn throughout Indonesia. The inner area is a diamond shape, which may be solid or batiked. The outer part of the cloth is decorated with various motifs, with an ornate border that includes imitation fringe lines. It is possible for a head cloth to have different motifs in each quadrant, allowing for a high degree of decorative variety all in one head cloth.

Like the head cloth, the slendang or shoulder cloth can have borders and imitation fringe. There are many sizes; one for carrying children is about eighteen inches by seven and a half feet. Some may have one batik motif all over, or others might have each end specially decorated with tumpal (triangle) and other border motifs.

The kain panjang, a skirt wrapper about 250 centimeters long, may be covered with an all-over motif, or it may have narrow bands at the top and bottom. Sometimes kain panjangs are batiked with two contrasting patterns, called pagi-sore (morning-afternoon), an ingenious and efficient use of space because it allows a single length of cloth to serve as, in effect, two outfits. The cloth design is applied in the form of two triangles, so that as the cloth is wrapped about the body, only one design will show.

The sarong is shorter than the kain panjang (up to 220 centimeters in length) and sewn into a tube. Whereas the kain panjang was linked to central Java and the palaces there, the sarong was the regional dress of the north coast of Java, but eventually came to be used widely in Indonesia as informal dress. At the turn of the twentieth century, Eurasian female entrepreneurs developed colorful Pekalongan-style batiks (named for a town on the northern coast of Java) with a tripartite layout. Floral borders (pinggir) lined the top and bottom of the textile, often with the lower border as the wider one. At one end was a wide panel (kepala) whose ground and motif contrasted with the body or rest of the textile (badan). The lower floral border framed the kepala on both sides. In general, the badan and pinggir were made with a cap, but the floral bouquet in the kepala would have been drawn by hand (tulis). As sewn into a sarong, the kepala worn in front would be shown to its fullest advantage.

That Pekalongan sarongs reflected Dutch floral and other themes was no accident. In the early years of Dutch colonization of Java, Dutch men married Javanese and Chinese women, who wore kain-kebaya (blouse-jacket with kain panjang or sarong). The women and children were Dutch citizens and at social events women wore kain-kebaya, showing off their prized Pekalongan batiks. In time the longish kebaya shortened to hip length to better display the kepala and badan of the batik wrappers. In the early twentieth century, more Dutch women joined husbands or married Dutch husbands in Java and also adopted the kain-kebaya as a practical alternative to the tailored European dress. Yet in the 1920s, as European racial attitudes hardened in the colonies, European women sought to differentiate themselves from Eurasian women and so tended increasingly to wear tropical-style European dress in public venues.

Batik drawstring pants (celana) were similarly tied to the dynamics of ruler and ruled. The origin of batik pants is not clear, but they seem to have been modeled after pants for little Chinese boys. Chinese and Dutch men found batik pants both exotic and comfortable, and the pants were in use in the 1870s if not earlier. Dutch men favored them as loungewear in the privacy of their home, while their wives relaxed in kain-kebaya. Photographic evidence shows that the wearing of batik pants by adult men and children spread at least to Sumatra. The batik pants were made from a batik cloth or were made into pants from plain cloth first, then batiked. Batiks with border bands were incorporated in the batik pants by becoming the "cuff" of the pants. For taller individuals, an extension band of white fabric was sewn to the top of the batik pants; the band would be hidden under a shirt or jacket. 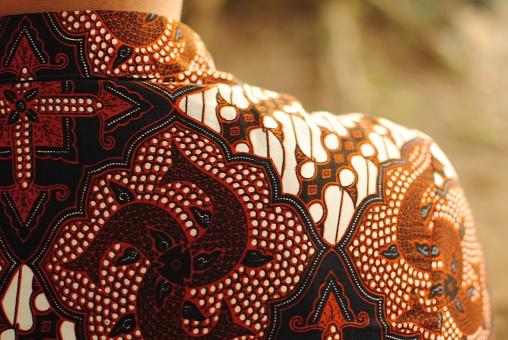 In the 1970s the competition from cheaper screen-printed imitation batik led to two developments: the batik shirt and tulis batik as couture. The governor of Jakarta, Ali Sadikin, proposed that a collared, long-sleeved button shirt in batik would be an acceptable formal alternative to the three-piece suit and hoped this strategy would vitalize the batik industry. The batik shirt became the ubiquitous dress for the urban Indonesian male. In the second development, batik designer Iwan Tirta created couture lines in tulis by producing the textiles on silk (in-stead of cotton) and reworking traditional motifs through size, color, and gold enhancement. If Tirta began with a flat batik cloth with an overall pattern and border, the border might be seen at the hem or sleeve; Tirta made use of the whole cloth. Both Sadikin and Tirta helped to create new dress styles for Indonesians and to give Indonesian batik a place in world fashion. 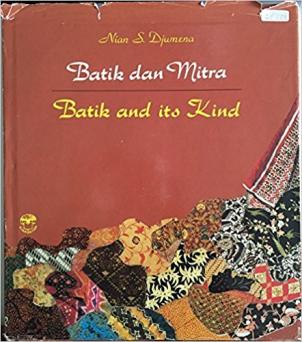