Camouflage cloth was developed during the twentieth century to make military personnel less visible to enemy forces. The word "camouflage" (from a French expression meaning "puffing smoke") refers to a process of evading visual detection through some combination of blend-in coloration, cryptic patterning, and blurring of the silhouette. Camouflage is widespread in the natural world, from the barklike coloration and patterning of many moths to the stripes of tigers and zebras. Used by predators and prey alike, camouflage is all about gaining a survival edge in situations of conflict.

Historic Use of Camouflage

Human beings have no natural camouflage features, but it is likely that some forms of camouflage have been used by humans for thousands of years. Prehistoric hunters would readily have learned to attach pieces of brush or clumps of grass to their clothing in order to approach prey undetected. In historic times, Indian hunters of the American Great Plains practiced a related technique, mimicry, by draping themselves in bison skins to approach herds of bison without alarming them.

The same techniques of camouflage that were employed by early hunters were applicable to small-scale tribal warfare and raiding. However, the development of large-scale military operations, which accompanied the rise of civilization and the invention of metal weapons, made camouflage less important. Warfare for many centuries consisted largely of combat between forces in plain view of each other; camouflage has no role in an army of massed swordsmen or spearmen. Well into the nineteenth century, many armies wore brightly colored uniforms (such as the British redcoats) to aid in maintaining formations and to boost morale.

Armies fighting colonial and frontier wars, however, found such uniforms a disadvantage when dealing with irregular forces who fought from hidden places and employed time-honored camouflage techniques used in hunting and raiding. The development of improved firearms capable of accurate long-distance fire at individual targets also made it important for troops to make themselves less conspicuous.

During the nineteenth century, British military forces in India encountered khaki (Urdu for "dustcolored") cloth, which they began to adopt for field use. Khaki uniforms were standard-issue for British troops in the South African Boer War in the 1890s, which featured widespread use of guerrilla tactics by the Boer forces. 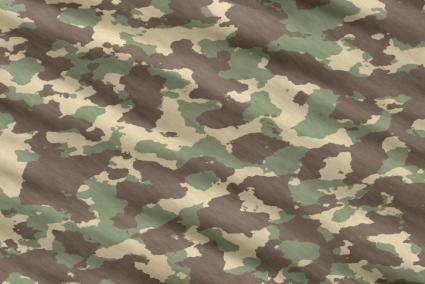 Camouflage paint in various colors and cryptic patterns was used by German, French, and other forces during World War I to decrease the visibility of bunkers, tanks, and even ships, but camouflage was not widely used to protect troops during that war. In the 1920s, the French military conducted extensive research into camouflage, and other armed forces soon followed suit; camouflage cloth as such dates to the period between the two World Wars. During World War II, camouflage paint and netting were extensively used to disguise combat vehicles and forward bases, and troops on all sides used camouflage-cloth combat uniforms or tunics in some situations (including white outfits for winter, arctic, and mountain operations). A problem arose in that camouflage cloth made it difficult for troops to distinguish friend from foe under combat conditions. Partly for that reason, American soldiers in WWII largely abandoned camouflage gear except for their helmets, with netting covers into which twigs, grass, and leaves could be inserted.

American troops continued to avoid camouflage cloth in the Korean War, but camouflage gear became ubiquitous in military forces worldwide during the 1950s. Camouflage outfits were widely used by American troops during the Vietnam War, the Gulf War, and other operations. Patterns and color schemes have been continually refined to produce better results in different environments, including jungle, grasslands, and desert.

Camouflage cloth entered the civilian wardrobe in the late 1960s as part of the counterculture appropriation of military surplus clothing for street wear-an ironic response to the Vietnam War. The trend faded but then resumed in the street styles of the 1980s. In the 1990s, in the wake of the Gulf War, camouflage cloth (including some pseudo-military patterns and colors developed especially for the civilian market) again entered civilian wardrobes. It was occasionally used even for such non-military clothing styles as sports jackets for men and dresses and skirts for women. In the second half of the decade, camouflage cloth was incorporated into the collections of several prominent designers, including John Galliano, Anna Sui, and Rei Kawakubo.

In the twenty-first century, camouflage cloth is firmly entrenched in the military wardrobe and continues to appear in civilian clothing from time to time. Though its military connotations are never absent, in some respects camouflage has become just another type of patterned cloth, like animal prints or plaid, available for optional use.