Crochet, from the French for hook, is a form of needlework consisting of a doubly interlooped structure built from a chain foundation. The basic stitch is a simple slip loop yet a multitude of different stitches may be created by varying the number of loops on the hook and the ways in which they are integrated with the structure. Hooks of varying fineness are frequently made of metal, wood, or bone, and common threads used are cotton, wool, silk, or linen. This versatile and potentially rich and complex craft has been practiced by both men and women in many countries. Perhaps the most ubiquitous item of crocheted clothing today is the kufi cap, often worn by Muslim men.

Researchers have encountered considerable difficulty finding early examples of crochet, in contrast to woven or knitted artifacts. The textile scholar Lis Paludan has conducted extensive research into the origins of crochet in Europe but has been unable to document its practice before the early 1800s. Yet items of crocheted clothing from India, Pakistan, and Guatemala can be found in museum and private collections; non-European traditions of crochet would seem a promising area for future investigation.

Crochet in Europe seems to have developed independently in two quite different milieus. As with knitting, this technique was used to create insulating woolen clothing for use in inclement climates such as Scandinavia and Scotland, where an early-nineteenth-century version of crochet, known as shepherd's knitting, worked with homemade hooks improvised from spoons or bones. Through wear or design, these items became felted, offering further protection against the elements. Simultaneously, in the more leisured climate of the female drawing room, another form of the craft was developing out of a far older type of needlework called tambouring. Apparently originating in India, Turkey, and Persia, tambouring was executed with a very fine hooked needle inserted into fabric stretched over a frame. The transitional step was to discard the fabric and execute the looped chain stitch "in the air" as it was termed in France.

This latter form of crochet developed in Europe and the United States during the nineteenth century, primarily as a women's activity. Numerous crochet patterns appear in women's magazines of this period, ranging from conventional clothing applications such as collars, bonnets, scarves, blouses, slippers, and baby wear to such fantastical creations as birdcage covers. Museum collections contain a wealth of crocheted purses and bags from the second half of the nineteenth century. Some of the finest are miser's bags, worked with fine colored silks and tiny glass or steel beads. These bags were rounded at both ends or curved at one end and square at the other and had a small opening through which coins would fit.

By the middle of the nineteenth century, patterns for Tunisian crochet began to appear. This was a hybrid knitting/crochet technique capable of producing a firm, stable structure for clothing such as shawls, waistcoats, and children's dresses. The technique was also called Afghan stitch and is still practiced in southeastern Europe, suggesting other geographic avenues for further research into crochet's origins and dissemination.

While crochet was a pursuit of the leisured classes, it was also a cottage industry, providing economic relief in rural areas from the effects of industrialization and displacement. The most famous example of this industry, which produced some outstanding examples of crocheted clothing, was Irish crochet. This fine lacelike form (also called guipure lace) probably developed out of an economic imperative to find a cheaper alternative to needlepoint lace and bobbin lace. A variety of floral-like motifs were finely crocheted in cotton over thicker threads, and joined together with fine mesh to produce a lacelike structure often of great intricacy and delicacy. During the potato famine (1845-1850) Irish crochet provided a form of sustenance to hundreds of Irish peasant families. As with many cottage industries of this period, it was organized by upper-class philanthropic women who arranged classes and distribution (through agents) of inexpensive and widely fashionable Irish crochet collars, cuffs, and accessories. Irish crochet's success and dissemination through international exhibition led to its practice as an industry in several European countries such as France, Austria, and Italy, and clothing of Irish crochet was imported into the United States and Canada.

During the first part of the twentieth century interest in crochet waned; the ubiquitous crocheted plant holders and hot water bottle covers, often executed in heavy, coarse yarns, were indicative of a foundering creativity where repetition of form was matched by a decline in technical skill. As might be anticipated, though, the craft revival of the late 1960s and 1970s inspired renewed experimentation. Fiber artists realized that by crocheting in the round, crocheting free-form rather than by working in rows, and building up three-dimensional forms from the surface of the fabric, they could produce elaborate wearable sculpture. The increasing range of alternative yarns and the production of often imaginative and humorous garments led to an appreciation of the art form as a vehicle for self-expression.

At the same time, crochet's perceived status as an undervalued women's activity, and its accumulated associations with amateurism, were countered head-on by the conceptual art movement. Crochet became radicalized. Perhaps its best-known proponent in this field was Robert Kushner, who crocheted clothing to be used as performance art. 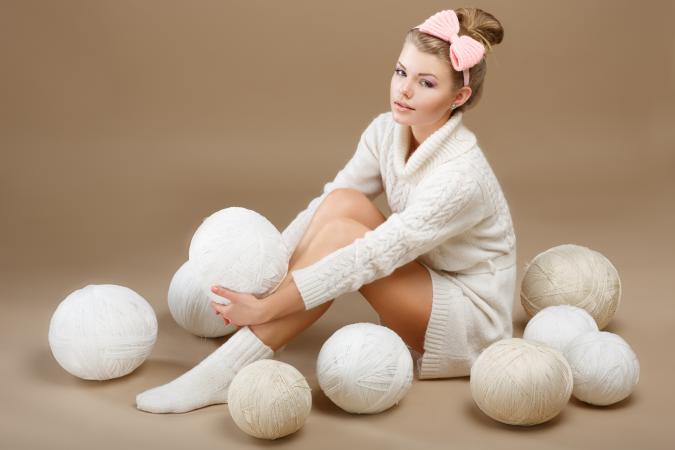 Unlike knitting, crochet has never become fully mechanized. Hence, it has not been a popular form of construction for ready-to-wear clothing. Discrete crocheted edging sometimes appears on the work of fashion designers best known for their knitwear, such as Adolpho. Otherwise, crochet has been used to great effect as part of the armory of couture techniques. The British design team Body Map has employed it in tongue-in-cheek homage to its "homemade" essence. The Irish designer Lainey Keogh uses knitting and crochet to celebrate a sensuous femininity. Vivienne Westwood has absorbed crochet into her stable of elaborate embellishment techniques and used it with aplomb on her reworkings of historical costume. Jean Paul Gaultier has combined knitting and crochet in ways that celebrate and subvert traditional patterns.

Crochet is an outstandingly versatile technique whose applications have ranged from the most basic utilitarian to haute couture. Over the past two centuries it has cycled in and out of fashion, but its potential for creative experimentation has regenerated attention from those who engage in it as a leisure pursuit, as well as professional designers. Regarding clothing and fashion, its potential for a mass market seems enormous if it were to become more mechanized.

Helpful primary sources would include women's journals from the nineteenth century, which contain a wealth of crochet patterns. See, for example, The Delineator, Harper's Bazaar, Ladies' Home Journal.

Paludan, Lis. Crochet: History and Technique. Translated by Marya Zanders and Jean Olsen. Loveland, Colo.: Interweave Press, 1995. Comprehensive review of history of crochet in Europe, with section on technique and reproductions of patterns from the nineteenth century.