The category handwoven textiles encompasses a broad spectrum of woven fabrics formed by interlacing two sets of elements-warp and weft-with the aid of a loom, which is a device for maintaining tension on the warp elements. Whether the loom is primitive, mechanized, or computer-driven, it is considered a handloom if it is operated directly by the weaver. Even though various types of power looms have been developed since the industrial revolution, handweaving persists in many parts of the world as an expression of ethnic culture, as a cottage industry or small-scale artisan workshop, as an avocation, and as an art form.

Handwoven cloth contains irregularities not usually present in industrially-produced cloth-a quality often considered desirable by contemporary artists and designers. The rich colors and designs of traditional cultural textiles are appreciated by collectors and continue to provide sources of inspiration to handweavers and artists, as well as to designers in the textile industry. Noted textile designers such as Jack Lenor Larsen formed unique collaborations with traditional handweavers around the world to produce unique and distinctive fabrics for interiors, using traditional design elements and woven by traditional means. Such collaborations not only produce exciting new textiles; they also help the cultures involved to maintain art forms that are struggling to survive in the current global economy.

Handwoven rugs are popular items of interior decor that may be imported from traditional textile workshops in countries such as Turkey and China, or they may be unique works of art designed by contemporary artists. Liturgical fabrics specially handwoven to adorn houses of worship comprise a specialized market for this specialized group of artist-weavers. Other handwoven items created for interiors include afghans or throws, table linens, and wall hangings. A few handweavers specialize in reproducing historic fabrics for historic dwellings and reenactments.

Many artist-weavers are attracted to using hand-manipulated weaves, such as tapestry and supplementary-weft techniques, that allow for the creation of free-form and pictorial designs to create tapestries and wall hangings for art galleries and collectors. A growing field for artist-weavers is the application of digital technology to handweaving to produce computer-generated designs on complex looms.

Cultures with living traditions in handwoven textiles made on simple looms are numerous and can still be found in many parts of the world, including Mexico and Guatemala, Peru, Bolivia, Ghana, Nigeria, Morocco, Turkey, China, Burma, Japan, Thailand, Vietnam, Indonesia, and the Philippines.

Fabrics woven on simple two-bar looms such as the backstrap loom, tend to be narrow widths (12-14 inches) of warp-dominant or warp-faced plain weave, for ease in operating the loom. The so-called primitive fabrics produced on these looms, usually by women, are often decorated with elaborate supplementary-weft techniques (brocade) inserted between the rows of the plain-weave ground; or with supplementary-warp techniques (pickup weaves) worked in a similar manner. Such patterns involve hand-manipulating selected threads during the weaving, and their complexity is limited only by the weaver's patience and imagination.

Many cultures make use of simple, two-bar looms to create their traditional folk costumes. Such weavings are often pieced together from rectangles of narrow, four-selvage cloth and may be further embellished after assembly. Two-bar looms may also be used to create shawls, cloths for wrapping and carrying, bags, rugs, tent fabrics, and other utilitarian fabrics. From the brocaded huipil, or blouse, worn by indigenous women of Guatemala and Mexico, to the sarongs of Indonesia, traditional hand-woven garments are associated with personal identity and cultural pride.

Weft-faced weaves such as tapestry can be woven on an upright version of the two-bar loom. Well-known products of upright looms include Turkish rugs in various weaves such as pile, kilim (tapestry), and soumak; and the Navajo rugs of the Southwest United States made in tapestry weave.

A simple foot-manipulated loom, the tripod loom, is used by men in West African countries such as Nigeria, Senegal, and the Ivory Coast, to weave narrow cotton strips for kente cloth. These strips are pieced together to make large cloths for men's ceremonial dress. 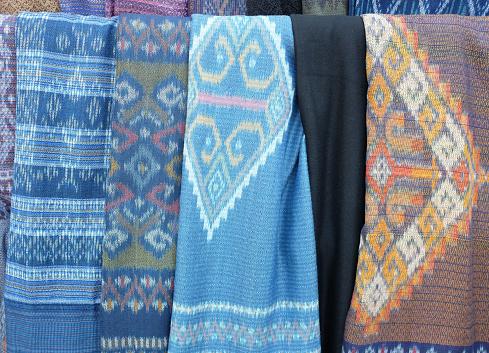 Handwoven fabrics created on mechanized hand-looms such as treadle looms can range from simple, textured effects achieved with novelty yarns in plain weave, to fabrics with pattern repeats that become increasingly complex as the available number of loom shafts increases. India, China, Japan, and Thailand are well-known for their production of handwoven silks, cottons, and other natural fibers. Guatemala and Mexico produce handwoven cotton fabrics. Cottage-industry handweaving of woolens persists in Scotland and Ireland.

Artists who create art-to-wear garments often prefer the distinctive texture and character that handwoven cloth adds to their expressive works. Contemporary hand-woven clothing has undergone an evolution in sophistication since it became popular as an art form during the 1960s. As a greater variety of threads became available, and as handweaving equipment became more sophisticated, so did handwoven clothing design. Woven fashions in the 1960s and 1970s were inspired by ethnic clothing styles and were usually designed using rectangular shapes that could be put together with minimal cutting or sewing. Weavers at that time also challenged themselves to create garments "shaped on the loom" by weaving pattern pieces to shape according to a pre-drawn cartoon. By the 1980s, the increasing availability of fine yarns and luxury fibers combined with the increased availability of complex looms, inspired handweavers to create drapeable fabrics for fashionable, tailored garments and to explore the expressive possibilities of weave structures in fashion design and wearable art. Handweavers today create complex textiles through creative combinations of weave structure and use of textured yarns. They may also employ techniques such as warp painting or ikat dyeing of the threads before weaving, or may apply surface design techniques such as painting, printing, and foil transfer to embellish the finished fabric.

In addition to textiles produced for the interior design trade mentioned above, commercial markets for handwovens in the United States and Europe include folk art galleries, museum shops, craft galleries and art and craft fairs, wearable art galleries, and contemporary art galleries. In the many countries with cultural textiles traditions, sales are realized through tourist markets, specialty shops, and government supported handcraft outlets. Artisan cooperatives may export textile products through fair trade markets, which guarantee the artisans a fair wage for their work. Export and import of handwoven yardage occurs through the international textile trade or through specialty importers.

Hecht, Ann. The Art of the Loom: Weaving, Spinning and Dyeing Across the World. New York: Rizzoli International, 1989.