The word "homespun" connotes both a rough fabric worn by country people and the human qualities, good or bad, associated with it. In English literature, "homespun" can mean boorish behavior or wholesome simplicity. In Shakespeare's Midsummer Night's Dream, for example, Puck dismisses the comic bumpkins Bottom and Snout as "hempen homespun." Writing a century later, John Dryden contrasted "harlot-hunting" foreigners with an "honest homespun countrey Clown" of English make. In the eighteenth century, political writers on both sides of the Atlantic adopted the personae of a wise but plainspoken countryman or -woman, signing themselves "Dorothy Distaff" or "Horatio Homespun." In the nineteenth-century United States, poets, novelists, and preachers celebrated an idealized "age of homespun" that symbolized the virtues of self-sufficiency and egalitarian simplicity.

Because "homespun" had such a powerful literary existence, it is sometimes difficult to define its actual use in times past. Commercial production of cloth was well developed on the European continent and in Great Britain by the seventeenth century. Before industrialization, the opposite of homespun was not factory spun but market spun. Most spinners did, in fact, spin in their own or their masters' homes, but merchant clothiers managed the steps in production. Spinning, weaving, and finishing sometimes took place in different regions or even in different countries, sometimes mixing wool from different colored sheep to produce the rough hodden, russet, or country gray that poets praised, but that fewer and fewer people actually wore.

In the earliest years of settlement, North American colonists had little incentive to spin. It made more sense to devote energy to developing crops for export. But as farms and plantations developed and as the population grew, more families began to raise sheep and sow flax for their own use. By the middle of the eighteenth century, in New England and in the Chesapeake, women took up weaving, an occupation that had belonged to men in commercial textile-producing areas of Europe. In Pennsylvania, high immigration from England, Scotland, and Germany kept looms in male hands. Rural families used locally made fabrics for towels, sheets, grain bags, everyday petticoats, work shirts, and aprons, but they were never self-sufficient. English woolens and Indian calico were prized for outer clothing, and in the plantation South, most slave clothing was still made from cheap imported linens like osnaburgs or from coarse Welsh woolens.

Homespun took on political connotations in the years leading up to the American Revolution. A writer in the 16 October 1769 Boston Gazette claimed that if "Hellen wrought the Fate of ancient Troy," then New England's daughters, through household industry, could "make us Blest and Free." As political leaders urged boycotts of British goods, New England women gathered in "spinning meetings" and southern planters like George Washington improved sheep herds and diverted some slave labor to spinning. Although true self-sufficiency was never a realistic possibility, the boycotts did for a time put pressure on Parliament.

Before a second war with England in 1812, a Rhode Island poet, nostalgic for revolutionary days, lamented in the 1 December 1810 (Providence) Columbian Phoenix:

There was a time-Columbia's gothic days-
When maidens spun their wedding gowns and linen:
But no, so tasty, so refin'd our ways-A homespun gown no wench will stick a pin in.
The veriest dowdy now is too genteel,
To waste a moment at the whirling wheel.

The poet was wrong in thinking American women had ever spun their "wedding gowns," though many women continued to spin a great deal of household linen, and newspapers once again reported patriotic spinning bees during this war. 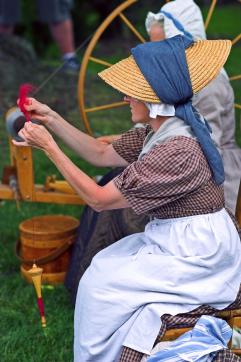 The federal census of 1810 counted spinning wheels and yards of cloth as well as people. On average, Americans were making ten yards of cloth per capita, though the state averages ranged from twenty-eight yards in New Hampshire to five in Maryland and Delaware. The early stages of industrialization actually stimulated household production. When water-powered carding mills assisted in the tedious task of preparing wool for spinning, housewives increased their output of spun yarn. They also learned to mix factory-spun cotton thread with home-spun flax or wool. In much of the United States, though, household production declined rapidly after 1830. It persisted, however, in isolated pockets of the Northeast and South, in newly settled areas of the West, and in eastern Canada, where it was still an important part of the agricultural economy in 1870.

In the southern United States, homespun also had a brief revival during the Civil War. Again poets and politicians linked patriotism with female industry, as in the popular song "The Homespun Girl."

The homespun dress is plain, I know,
My hat's palmetto, too;
But then it shows what Southern girls
For Southern rights will do.

Again, the mystique of homespun was probably more powerful than the reality. Women who already knew how to spin took their wheels out of the attic, but families with no prior experience found it difficult to take up cloth making. Furthermore, many white women refused to wear homemade fabric because it seemed too much like the rough "negro cloth" worn by slaves.

The United States was not the only place where homespun acquired political meaning. When Mohandas Gandhi returned to India from South Africa in 1914, he wore an approximation of peasant clothing. Soon he was preaching the gospel of swadeshi, or self-sufficiency, urging Indians to burn imported fabrics and adopt simple clothing made from khadi, or homespun. Ironically, there were so few peasants who still spun by hand that he had to search out those who could revive the dying craft, and because khadi was so much more expensive than industrially produced fabrics, it was difficult to persuade people to use it. Gandhi's promotion of khadi had two objectives-to assert India's economic independence and to unify the nation by establishing a national dress common to all classes. Gandhi wore a simple loincloth to demonstrate his solidarity with poor peasants who could not afford more elaborate clothing. Although few of his followers went to that extreme, the khadi cap he designed did become an emblem of national unity.

Ulrich, Laurel Thatcher. The Age of Homespun: Objects and Stories in the Creation of An American Myth. New York: Alfred A. Knopf, 2001.