Jacquard is a style of "figure weaving." It can be used to create elaborate designs and detailed images of objects such as flowers and birds. This is done on a Jacquard loom, a device invented in Lyons, France by Joseph-Marie Charles Jacquard in the early 1800s. Before that time, figure weaves could only be made by more labor-intensive techniques such as tapestry, adding extra yarns to the surface of another weaving by hand (supplementary weft), using different sizes of yarns to make parts of the pattern stand out (dobby weaving), or by using a draw loom. 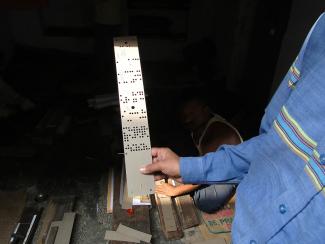 Draw looms were invented more than two thousand years ago in China and are operated by two people. The weaver sits at the front of the loom, adds the filling yarns, and beats them in place. An assistant sits at the side of the loom and lifts combinations of dozens (or even hundreds) of harnesses. These are frames with "heddles" that hold one or more yarns in place. Joseph-Marie Jacquard modified the draw loom by replacing harnesses with individual heddles attached to small weights. He also used a series of metal punch cards that could tell the loom the order and number of heddles to lift, replacing the need for a human assistant. Until the invention of computers, Jacquard looms were the most complicated pieces of machinery in the world. In fact, the punch cards used by early computers were based on the Jacquard system. In a reversal of fortune, Jacquard looms now use computers instead of cards to keep track of the pattern.

Jacquard fabrics have a distinct front and backside. The front shows the design in crisp detail, but the back is covered with long "floats." These floats are yarns that were carried on the back of the fabric whenever they were not needed to form the design. Because the floats are easily snagged, the back of a jacquard fabric must be lined or hidden. An easy place to see floats is on the back of a clothing label-labels that are not printed are generally jacquard weavings.

As the design becomes more complex and the number of colors increases, more and more yarns have to be carried on the backside. This can make the cloth very heavy. For this reason, many jacquard fabrics are restricted for use in home furnishings. Brocade, made from silk or a synthetic material such as polyester, is one of the few figure weaves light enough for clothing. Although the mechanization of jacquard weaving has made it much less expensive to produce, brocade is still worn primarily for special occasions. Other figure weaves used in clothing, such as piqué and waffle weave, have a small textured pattern created by using a series of different yarn sizes. These patterns are less complicated than brocade and do not necessarily require a Jacquard loom.

Damask is a one-color, relatively lightweight cotton or linen jacquard fabric (originally produced on a draw loom) that is used for elegant curtains and tablecloths. Small floats on the surface are ironed or pounded flat (in a process called beetling) to make the cloth very smooth and lustrous. Heavier jacquard fabrics are used for upholstery and accessories such as shoes and handbags. Although these are sometimes called "tapestry," real tapestries are extremely expensive and are made by a very different process.