Leather is animal skin that has been processed in various ways (generically known as tanning) to preserve and soften it for use in clothing, accessories, and other applications. Suede is a special type of leather in which the inner surface of the skin is processed to produce a pleasing texture.

History of Leather in Clothing

Leather as a medium to create clothing dates back to CroMagnon man some 50,000 years ago. Around that time, early humans began to migrate from relatively warm regions of the earth to the more northerly and colder parts of the northern hemisphere. Although prehistoric people learned that animal skins could be used to keep warm, they would have encountered difficulties in using untreated skins: when dried, animal skins get stiff. Among the many discoveries made by our ancient ancestors, the preservation (tanning) and processing of animal skins was one of the most important to their survival. They did this through a variety of means, such as boiling the skins in tree bark and then salting them. Almost all preservation techniques concluded with rubbing the skins with animal fat to soften them, and bending and working the skins (or chewing them) until they became soft. This would render the skins soft enough so that they could be comfortably worn and tied around the body. Later, bone tools (such as needles and awls) were developed so that skins could be sewn together to create clothing.

As far back as the fifth to the third millennium B.C., there is evidence that women wore garments made of leather in Sumeria and Mesopotamia. An almost perfectly preserved gazelle skin loincloth dating from 1580-1350 B.C.E. was found in Egypt. There are also numerous references to leather found in the Bible. Tanneries were uncovered in the ruins of Pompeii.

While animal skins were usually tanned for the purpose of showing off the skin's "grain" (outer) side, eventually it was discovered that otherwise unusable skins (e.g., grain sides were scratched) could be salvaged by processing the inside of the skins. Such "inside-out" leather was the forerunner of suede.

Over time, many countries, such as Spain, England, and France, began to perfect their own tanning techniques.

These sometimes included novel refinements; for example, during the seventeenth century, the French would cover up the disagreeable odor left on skins after tanning by bathing the skins in perfume.

In North America, Native Americans introduced early European settlers to the technique of oil tanning. American Indians made tepees out of leather and decorated their leather clothing with beads, bones, porcupine quills, and feathers. They also painted their garments with elaborate battle scenes. Through their exceptional tanning skills, they were able to produce white leather, a particularly difficult color to achieve.

During the nineteenth century, Augustus Schultz, an American chemist, invented a newer, faster method of tanning using chromium salts. This innovation made it possible to reduce the tanning process from weeks and months to hours. Engineers in America and Europe began to invent special machines and processes that further increased tanning productivity. By 2004, tanneries around the world closely guarded proprietary techniques to give themselves a competitive advantage. Many tanneries are exploring the eco-friendly method of vegetable tanning, using extracts from quebracho wood and chestnut.

Designers throughout history have regarded leather as having a certain allure. From the earliest decorated ceremonial garments worn by tribesmen to high fashion couture collections, the wearing of leather has been synonymous with status. Because of the high cost and craftsmanship involved in the processing of leather, leather represents "luxury."

Leather has also been used for thousands of years to make sandals and shoes. In addition, it has had important industrial uses, for example to make drive belts for industrial machinery.

The Processing of Leather 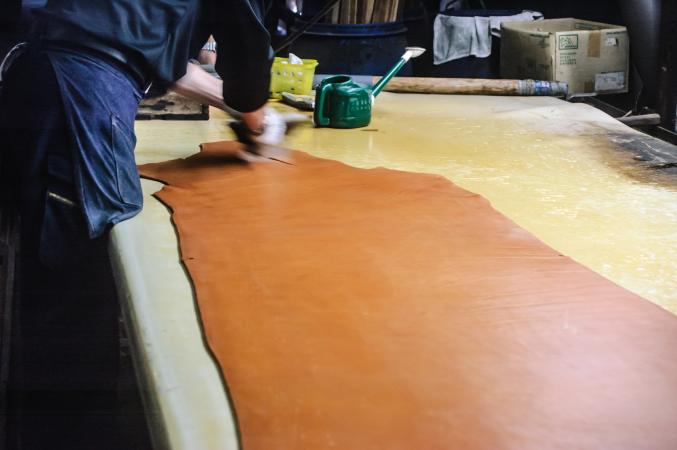 Leather, for the purpose of apparel manufacturing, is a byproduct of food consumption. The animals that are consumed for food and that are most often used for clothing are: cow, goat, sheep, lamb, pig, and deer. Leather is processed by a tannery. A tannery is a factory that buys raw skins from an abattoir, makes the skins into leather, colors them, and then sells them to manufacturers. Animal skins come from all over the world and tanneries are located worldwide.

"Hides" (the pelt of large animals such as pig, deer, and cow) and "skins" (smaller animals such as goat, sheep, and lamb) are delivered to the tannery de-haired, either in a preserved dried state or in a preserved "pickled" state (i.e., chemically treated with various salts, water, and sulfuric acid). These treated hides and skins are referred to as crusts. Crusts, which are dried to a boardlike state, can be stored for several months before tanning.

Tanning is a process that is dependent on several factors: the type of skin, the desired end use, and the price the buyer is willing to pay. By using specific amounts of fat liquors, chromium salts, and other chemicals or vegetable tannins, tanneries can formulate a recipe that can create a soft, subtle expensive skin. Or by cutting out certain steps, they can produce a less expensive skin. Color can be added to skins by either adding it to the drum after tanning to produce aniline skins, or for skins of lesser quality, color can be sprayed onto the surface of the skin to produce semi-aniline skins. In the case of extremely poor quality skins, color can be applied in heavier concentrations in an attempt to hide imperfections. These are called pigmented skins. Pigmented skins are generally hard to the touch.

Leather skins can be processed utilizing different sides of the skin. When a leather skin is de-haired and tanned with the grain side out, it produces a smooth finish known as nappa. When the underside of a leather skin is buffed, it produces a velvety nap known as suede. In 1809, a leather-splitting machine was invented that could split heavy leathers to any desired thickness, producing skins known as splits, which are sueded on both sides. Cow and pig splits are less expensive than processing singlesided lamb and goat suede. The grain side of leather can also be processed to create a napped finish known as nubuck, however, this is not considered true suede.

At the tannery, skins are sorted to choose which skins will be made into suede and which will be chosen for nappa. Suede can be made from relatively lower-quality skins than nappa; however suede requires several more processing steps. The animals most often used to create garment weight suede are: lamb, sheep, goat, pig, and cow. Suede produces a nap similar to velvet and corduroy, therefore care must be taken when cutting suede into garments as color shading will occur if not properly cut. While nappa skins are generally more expensive than suede, the higher material consumption, due to cutting loss while shading, usually results in equal pricing at the retail level.

Tanneries throughout the world are constantly inventing new recipes to tan and color skins to achieve a competitive advantage over their peers. Tanneries guard their recipes and special techniques for processing leather. By working together with fashion designers, tanneries often create many innovative production techniques. Stamping, embossing, distressing, tie-dyeing, pleating, printing, beading, flocking, perforating, and embroidery are only some of the special techniques that designers have created to make leather skins even more spectacular.

Designers throughout the years have used leather much the same as they would cloth. From its main use in outerwear and sportswear, to the most elaborate evening-wear, designers have always appreciated the uniqueness of leather. Leather items such as the aviator jacket worn by General Patton in World War II and the black leather jacket worn by James Dean in the 1950s have created important trends in the fashion world. From the 1960s through the 1970s, American designer Bonnie Cashin worked extensively in leather. European designers such as Claude Montana, Versace, Armani, Ungaro, Fendi, Gucci, Alaia, and Hermès took the lead in leather apparel design through the 1980s. By the mid-to late 1980s, many of the top American designers also discovered leather's limitless possibilities, such as Ralph Lauren, Calvin Klein, Geoffrey Beene, Donna Karan, and Bill Blass.

In 2004, leather garments could be found at all price points, from the most expensive leathers used in couture to skins used in the production of mass-market clothing.

Clothing made of suede is more fragile and harder to keep clean than non-suede leathers. This is because suede tends to absorb stains. Wearing suede is considered a luxury and a symbol of status. Designers throughout history have used suede for its beauty. Many designers prefer suede to work in, especially when they are designing soft, drapey, fluid styles. Suede is used much the way a designer would use cloth. Suede can be draped, pleated, gathered, and fluted. In 1930, the French designer Paquin created a suit using goat suede and wool. Cow-slit was used by Hermès in 1957 to create a coatdress and also by Bonnie Cashin in her suede ensemble from the 1960's. Suede is also a favorite among couturiers, as demonstrated in Givenchy's suede patchwork suit from Couture Collection 1992 and Jean Paul Gaultier's suede-draped tunic from his Couture Autumn/Winter Collection 2002.

Designers often work with tanneries to develop innovations in suede such as reversible and double-faced skins, embossing to resemble hides of endangered animals, and in the creation of new perforating techniques.

The animal-rights organization known as People for the Ethical Treatment of Animals (PETA) has a history of attacking the leather apparel industry as well the fur industry. Though they acknowledge that most leathers used in apparel are made from the byproducts of food consumption, they have accused manufacturers in developing countries of inhumane slaughtering processes as well as using toxins in the tanning of leather.

The Leather Apparel Association (LAA) is a trade association representing leather manufacturers, cleaners, suppliers, tanners, and retailers nationwide. The mission of the LAA is to continually monitor and improve the health and future of the leather apparel industry and provide support against PETA. The Leather Industries of America (LIA) is another organization that represents tanneries, sellers, and other leather-related companies. The LIA provides technical, environmental, educational, statistical, and marketing services to its members and the public.

Even with numerous attacks by PETA, the leather apparel industry remains a $14.5 million global industry. As appeal for leather clothing continues, the leather industry seeks new eco-friendly methods to process leather. Although leather apparel experiences trend cycles, it most definitely remains in 2004 a desirable commodity in the world of fashion.