Even before the Islamic period, the Middle East was a nexus of Eurasian textile production and trade. The complex of trade routes commonly referred to as the Silk Road reached their western end at the ports of the eastern Mediterranean. Inevitably these markets were also centers of textile production. The spread of Islamic rule in the seventh and eighth centuries encompassed and incorporated the previous textile industries of the Byzantine and Sassanian Empires. In the early Islamic period textile design was derived from that of their predecessors, but Islamic cultures soon evolved their own forms of expression. During the Middle Ages, the textiles of the Middle East were highly prized goods that in due course stimulated the development of indigenous European production. The connection between Islamic and European cloth can be seen in the extensive textile terminology that is derived from Persian, Arabic, or Turkish, including terms such as damask, taffeta, cotton, muslin, seersucker, and mohair.

In the Islamic world, textiles were highly valued goods, accepted as tribute in lieu of taxes in some periods. Gifts of textiles and garments were presented to honor officials or visiting ambassadors. In a part of the world where much of the population could claim nomadic antecedents, interiors were primarily furnished with textiles, used to cover floors, walls, cushions, and to create beds and storage of all kinds. Gifts were presented in a textile wrapper, and the more elaborate the workmanship of the wrapper the greater the honor intended. Textiles were also held to have the power to protect or harm, and so inscriptions and symbols were frequently incorporated into them to this end. In the century following the death of Muhammad, representation of living creatures were banned, particularly in the Sunnī tradition. Islamic design developed its own metaphorical language, utilizing geometry, calligraphy, vegetal, and architectural forms. However, it should be pointed out that in some Islamic textiles human and animal figures do appear, particularly in Persian and Central Asian silks and carpets.

Elaborately patterned silk textiles were produced throughout the Islamic world in various complex weaves, including compound twills, lampas, and brocades, as well as double and triple cloth. Motifs were stylized and varied greatly depending on the period and region. Simpler textiles including tafta and satin weaves were also important and numerous, as were a variety of very lightweight silks. In addition, there were textiles in which silk warp and cotton weft were combined, frequently striped. In the rep weave known as alaca the silk warp (yarns stretched on the loom) covered the cotton weft (yarns interlaced with the warp) to produce an economical silk textile. In the satin weave known as kutnu the silk warp shows on the face of the fabric, but the back shows the cotton weft. This textile was widely favored because according to Islamic tradition men were forbidden to wear silk against the skin. Tapestry technique was another important category of silk weaving. 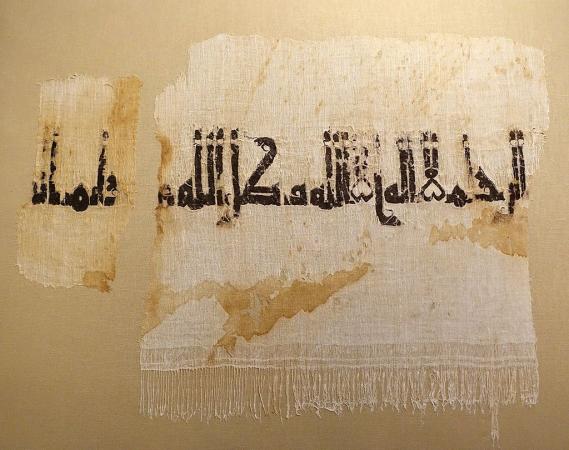 One of the most characteristic early Islamic silk textiles was tiraz, which was particularly important from the tenth to fourteenth centuries. It was a product of royal workshops. Tiraz textiles were embellished with borders containing inscriptions, usually embroidered or tapestry woven in gold thread. Baghdad was the best-known source of tiraz, but it was produced in workshops sponsored by many rulers in many locations from Egypt and Yemen to Syria and Moorish Spain. These borders appear most commonly as bands on the upper sleeve, but were also used on the edges or in the body of the garment. They were also found on burial shrouds and ceremonial textiles. The inscriptions usually included the name of the current ruler as well as religious quotations. Tiraz embellished garments were worn by high-court officials and presented as honorific robes. Linen or cotton textiles might also have tiraz bands.

The Moorish conquest of Spain beginning in the eighth century led to the introduction of tiraz workshops, as well as workshops for the production of compound-weave silk textiles. These silks might resemble the textiles of late Byzantine or Sassanian workshops, but soon Spanish workshops were producing distinctly Islamic motifs, including elaborate geometric designs as well as stylized floral designs. Spanish textiles were varied, but strongly contrasting colors and geometric motifs were common.

Bursa was the most important center for silk production in the Ottoman Empire from the fifteenth century on, although not the only producer of high-quality silk textiles. Ottoman silks were richly colored, and frequently featured large-scale patterns. Although in the fifteenth century Ottoman textiles could be said to have influenced Italian silk design, thereafter Italian design influenced some Ottoman silks. However, many designs were distinctively Turkish, showing an affinity with Ottoman miniature painting and tile design. These featured stylized flowers, foliage, and vines. A common motif was a cluster of three circles in combination with wavy lines. The Ottoman repertoire included voided velvet as well as other compound weaves. Fine silk embroidery, done on silk, velvet, linen, or cotton, was another important category of Ottoman textile work.

Safavid Iran produced exquisite silks that were considered to be among the finest in the Islamic world. Yazd in the fifteenth century and Isfahan and Kashan in the sixteenth and seventeenth centuries were among its most important centers of production. Elaborate voided velvets and a wide array of intricate compound weaves, as well as fine embroidery were characteristics of Persian silks. Persian designs were finely detailed with complex coloring. A distinctive group of Persian textiles used human and animal figures, done in the style of miniature painting. The most elaborate of these woven textiles included scenes from Persian literature. Silk embroidery was also an important category of Persian textiles. The fine quality of Persian silk fibers contributed to the high quality, and made Persian raw silk highly sought after by foreign merchants. Persian textiles also influenced Moghul India.

A variety of types of flax were raised in the Islamic world, as well as other types of bast fibers, including hemp. Both cotton and linen textiles were widely used throughout the region. These textiles ranged from the heavy cotton canvas produced for sailing ships to extremely fine muslins and gauzes. Although India is best known for fine cottons, all of the countries of the Levant also developed their own fine cotton weaving industries. However, trade with India for textiles was important for the entire Muslim world.

Textile printing was known in pre-Islamic Egypt, but dating and provenance of early Islamic printed textiles is generally not clear. Printing blocks have been identified from the Fatimid period, and a number of examples found in Mamluk Egypt are believed to have been produced there. By the sixteenth century a printing industry existed in Syria, and in the seventeenth and eighteenth century this industry expanded into Anatolia, stimulated by the expanding European demand for Indian printed textiles being transported through the Eastern Mediterranean ports.

Mohair, Wool and Other Animal Fibers

Mohair and camel hair, as well as the goat hair referred to variously as cashmere or pashmina, were used to weave soft and beautifully patterned shawls in many locations throughout the Islamic world. These shawls became very popular in the west in the nineteenth century, but had long been a feature of dress in Muslim northern India, Persia, and Ottoman Turkey. The patterns were woven in twill tapestry or a variety of compound weaves, but in either case featured elaborately patterned and colored designs. Some of these were patterned stripes. Many were complex vegetal designs, the most well-known example of which is the boteh. The boteh is also referred to by other names depending on the language of the weaver. In the west this design came to be known as the paisley motif, named after Paisley, Scotland, where textile mills produced copies of the Indian shawls in the latter nineteenth century.

Although wool was widely used to produce a variety of apparel textiles, the best known Islamic wool textiles are the pile and flat woven textiles made as rugs, bags, bands, wall coverings, cushions, and other household equipment. Knotted pile weaving seems to have originated in Central Asia well before the date of the oldest known example, which was made about 2,500 years ago. The oldest examples of Islamic carpet weaving that have survived are the ninth century "Fostat" carpet fragment found in Cairo, and a group of thirteenth-century Seljuk Turkish fragments found in Konya in Central Anatolia. Sixteenth-century examples from Mamluk Egypt and Safavid Persia both attest to a sophisticated and long-established tradition. Carpet design can be divided into three categories that reflect their visual style, origins, and degree of technical excellence. The tribal carpets were produced by nomadic or village households primarily for their own use. The designs reflect tribal and regional affiliations, and tend to be relatively geometric in design. Although some are quite finely woven, many are relatively coarse. Court carpets were commissioned in court ateliers according to designs created by the finest artists of the day. These designs, which often bear a close relation to those of tile work, manuscript illumination, and silk textiles, are technically the most finely knotted, and visually the most intricate. Urban manufactory carpets constitute the third category. These carpets, produced under the direction of merchant entrepreneurs, may be technically very fine, but are characterized by somewhat more repetitive and less intricate designs as compared to court carpets.

Flat weaves include a variety of techniques, the best known of which include kilim (slit tapestry), jajim (compound discontinuous brocade), and soumak (warp wrapping). Card-weaving is a widespread method of making bands that appears to have a long history of use throughout the Islamic world. These techniques and others are used to create floor and wall coverings, storage bags, tent bands, and door panels, as well as animal trappings. Generally flat woven wool textiles were produced primarily for local use and are characterized by distinctive tribal or regional designs and color palettes. Modern production, however, is increasingly tailored to the color and design preferences of western markets.

Compound (Twill, Weave):
An adjective applied to any fabric or weave in which there are two or more sets of yarns in the lengthwise, the crosswise, or in both directions.
Lampas:
Fabric with a woven figure in which crosswise yarns form the design and a second warp yarn holds the crosswise design-forming yarns in place.
Tafta:
A fabric made from tightly twisted silk ply yarns in a plain weave.
Rep Weave:
Plain weave fabric in which crosswise yarns are larger than lengthwise yarns, thereby forming a pronounced crosswise rib.
Tapestry Weaving:
A handweaving technique in which crosswise (weft) yarns create a solid color patterned effect in selected areas (1) by being so closely packed that they completely hide the lengthwise (warp) yarns and (2) by not crossing the entire width of the fabric, but instead moving back and forth in the area of the design. In this way patterns of great complexity and size can be made.
Voided Velvet:
Velvet fabric in which the pile (standing fibers or loops) is limited to selected areas in order to form a design.

In the early twenty-first century much of this traditional production has been lost as modern textiles replace traditional ones. Where traditional textile production continues, the products are being transformed as the weavers seek to adapt to modern taste and lifestyles.